In the late 1930’s, six teen-aged girls in the town of Mancelona, Michigan, were each given bicycles for Christmas or their birthdays, respectively. A new Gamble Store had opened and sold new boy’s and girl’s bicycles, and Schwinns could be ordered through the local furniture store. One of the girls, Irene, said that when her parents took her to the Gamble Store to buy her bicycle, she was so excited that, to this day, she can remember the smell of the varnish on the wooden floor mingled with the smell of the new bicycle. The Gamble Store owner assembled the Gamble bicycles, and the Schwinns from the furniture store came in sections in a large box that were brought home to be assembled. 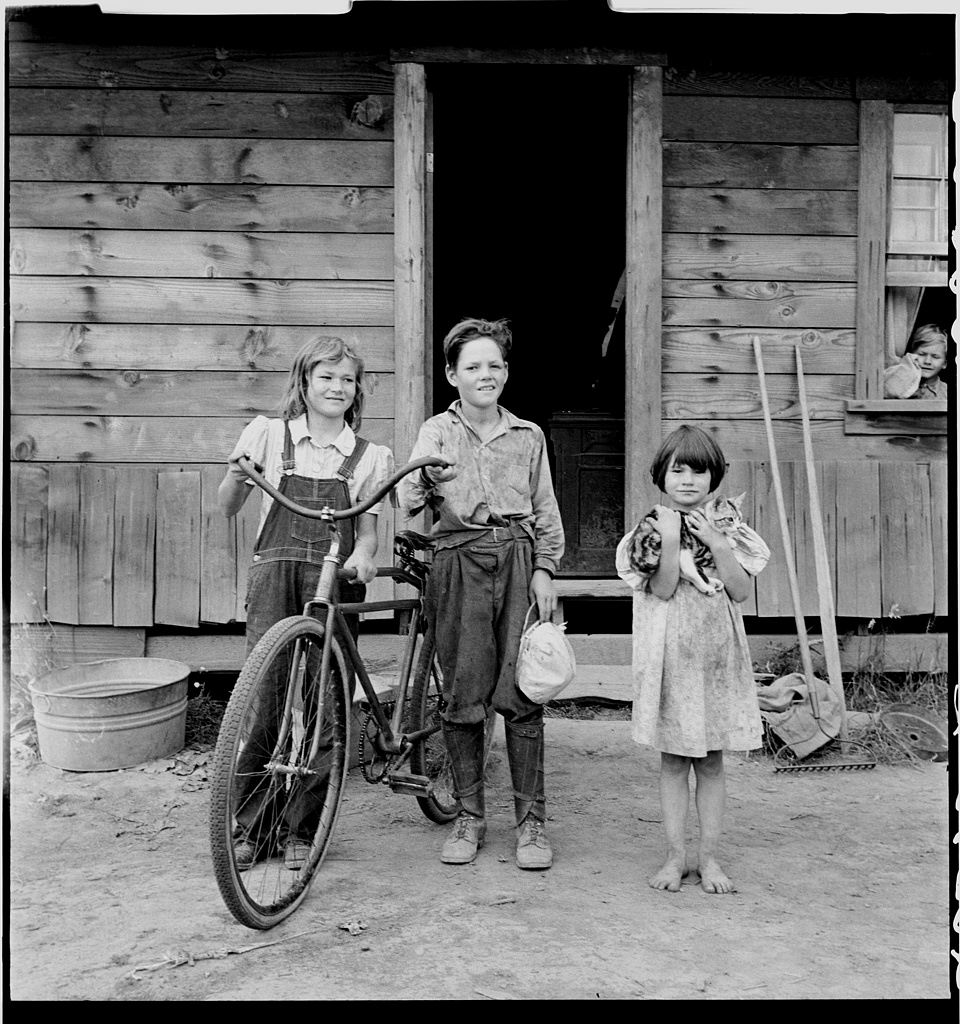 In the spring of 1940, Barbara Smith, Bernice Nelson, Carol Mizer, Irene Flinn, Norma Jean Blair, and Stevie  Stevens took a bicycle trip through the northwestern part of Michigan's Lower Peninsula. They didn't know anyone who had done it, but it sounded like a neat idea. Their parents said that they could go if they had chaperones. The girls asked Emma Nestle, who owned the Gamble Store with her husband, and Rose Hatto, a first grade teacher. Prior to going, the girls had to earn money to pay for food and cabins to stay in each night. They planned to cook their meals over campfires on beaches, at roadside rest stops, or in the cabins, so to earn money they sold boxes of Jell-O, raffled off two handmade pillows, and held a bake sale. They called themselves the Cycling Eight. 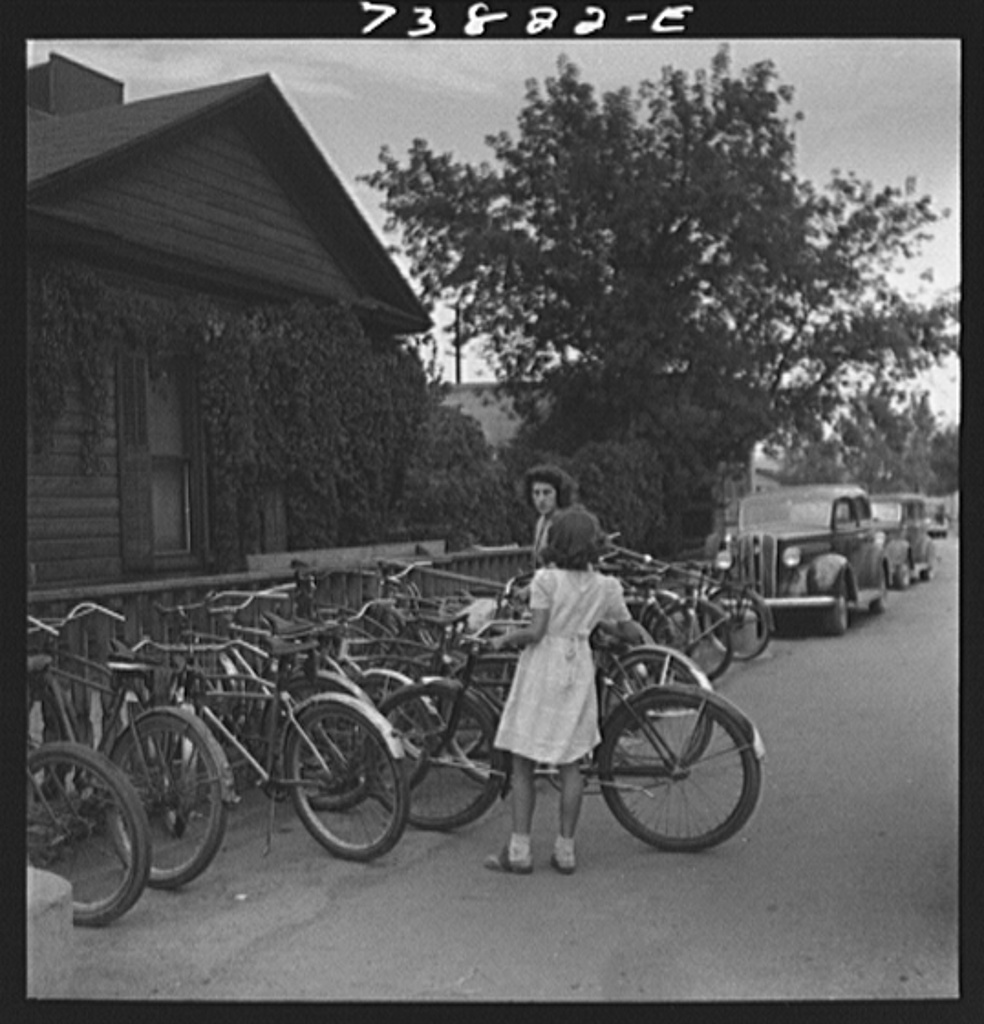 An assortment of Schwinn and Gamble bikes

All of the girls played in the high school band, and one July night, they marched together in the Cherry Festival Parade at Traverse City. It was a long, hot day, and the following morning, Bernice became ill with pneumonia. This was pre-antibiotics, so there was no penicillin. They planned to leave the following day, and too sick to bicycle, Bernice was unable to join them. So they became the Cycling Seven. There were two chaperones, Emma and Rose, and the five girls. Their bicycles were all Gambles or Schwinns. Norma Jean’s was a $30 blue Schwinn, Stevie’s was a red Schwinn, which, for an additional $5, included a luggage rack over her back fender. The bikes were solid heavy frames with balloon tires, coaster brakes, and no gears. The girls strapped or tied their luggage to their bike frames above the rear fenders and tied their sweaters on top of the suitcases. None of them had ever heard of wearing helmets. 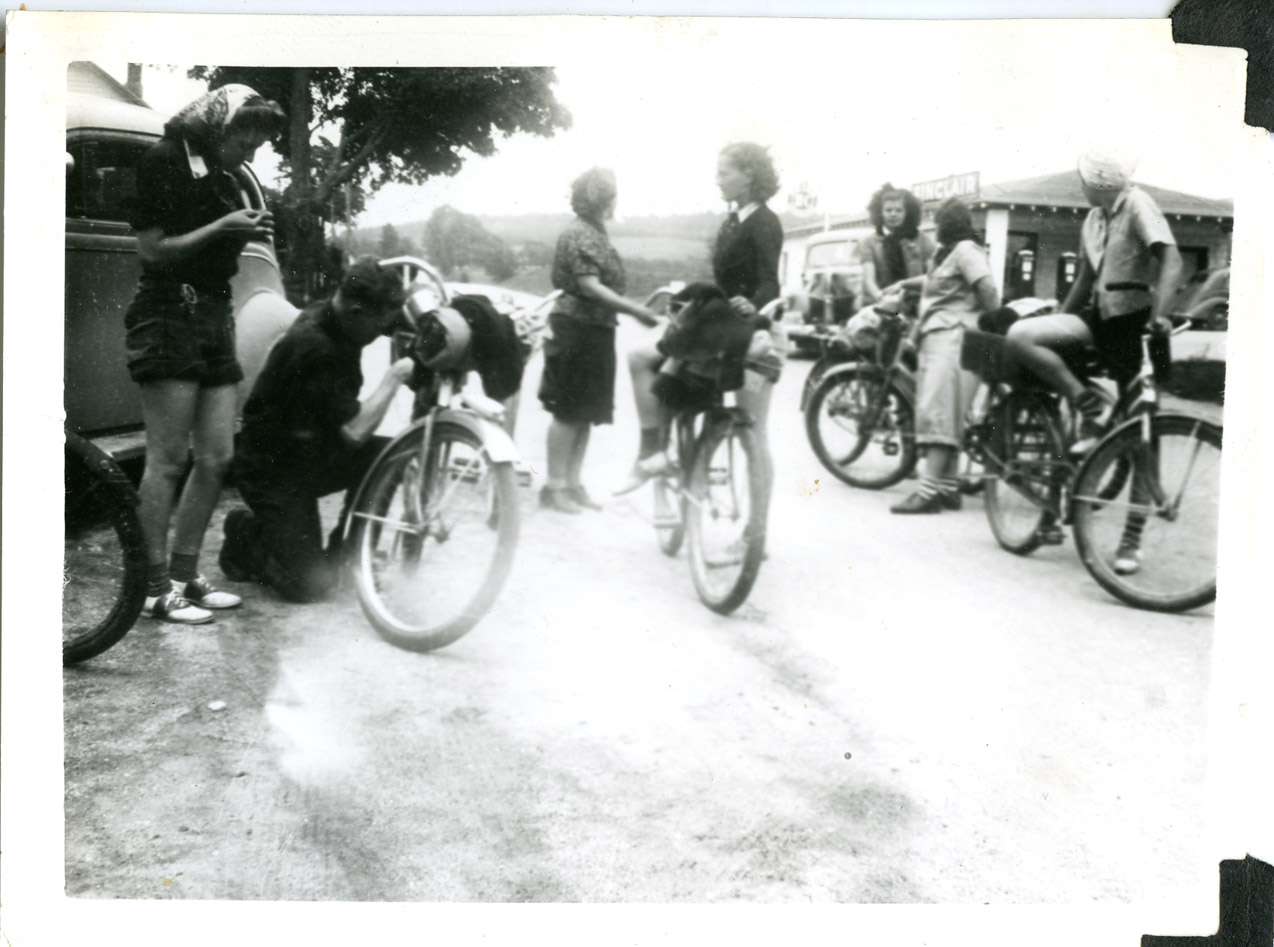 A stop to fix a loose screw on Emma's bike outside a Sinclair gas station.
From left to right: Emma, the mechanic, Irene, Rose, Carol, Stevie, Norma Jean, Barbara

The highways were two lanes and paved. There were no four-lane roads then. The girls left Mancelona, Michigan on a Monday morning and rode about two miles on a flat road before they were confronted with rolling hills for the next 10 miles — seven bikes strung out on the narrow right lane of the road, the girls pushing or pumping their pedals, and standing up to make it over the hills. A few Model A Fords passed them, slowing to 15 miles an hour. The Model A had a top speed of 35 miles per hour. As they passed the Cycling Seven, the drivers would stare straight ahead at the road with both hands gripped on the steering wheel, the passengers smiling and waving at the girls. In Alden the girls turned south a few miles, then west and rode beside Torch Lake to Elk Rapids, where they rode their bikes on the highway beside the east side of Grand Traverse Bay to Traverse City. They stayed there that night at the Shadowland Cabins. 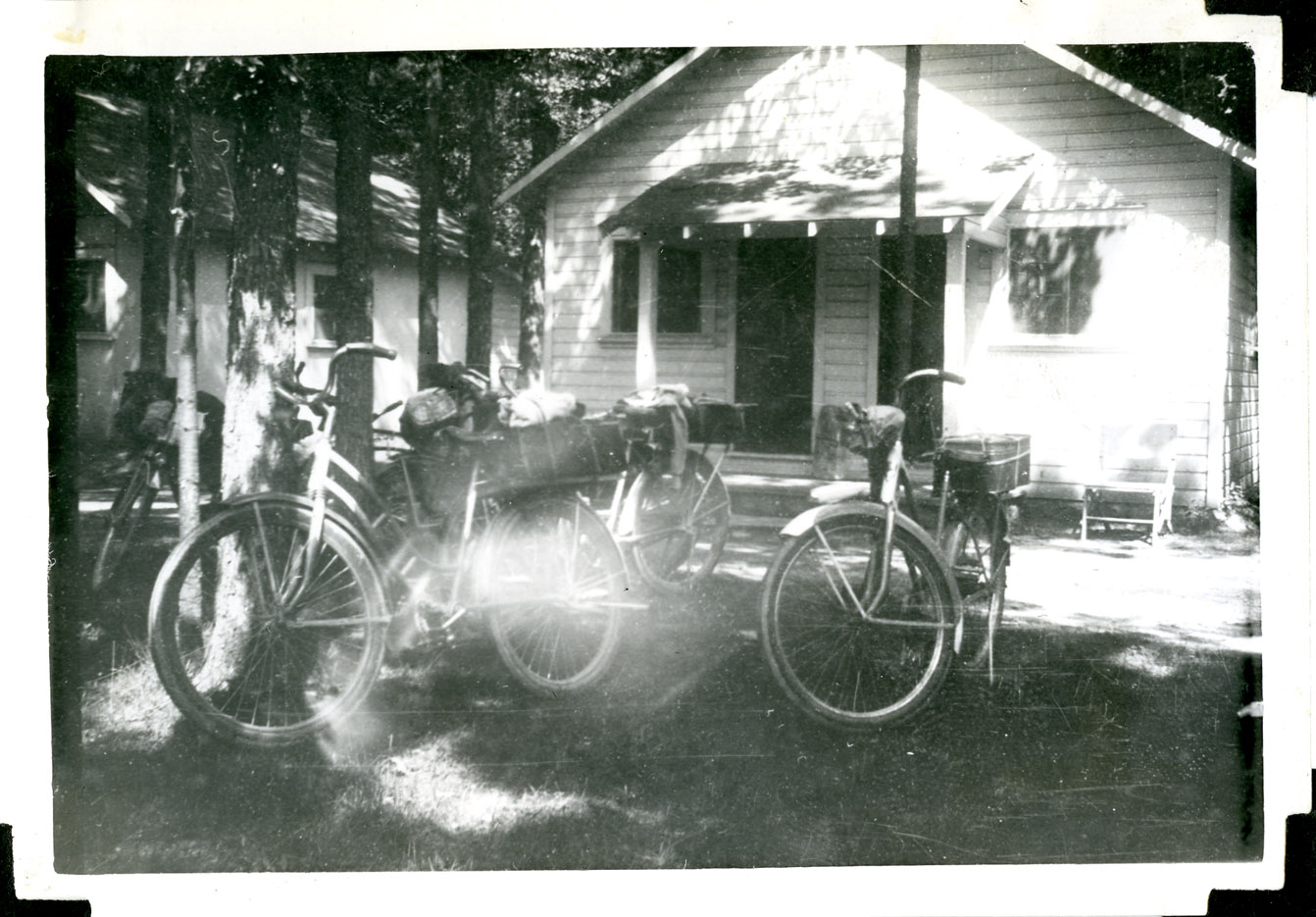 A different girl would phone her parents each night, only once a day, to let the parents know where the girls were located. That parent would call the other parents to give the message to them. The call went through an operator who plugged wires into a switchboard, connecting wires which went from town to town. After cooking and eating their supper, the girls went to bed and slept soundly. They had biked about 35 miles that day. 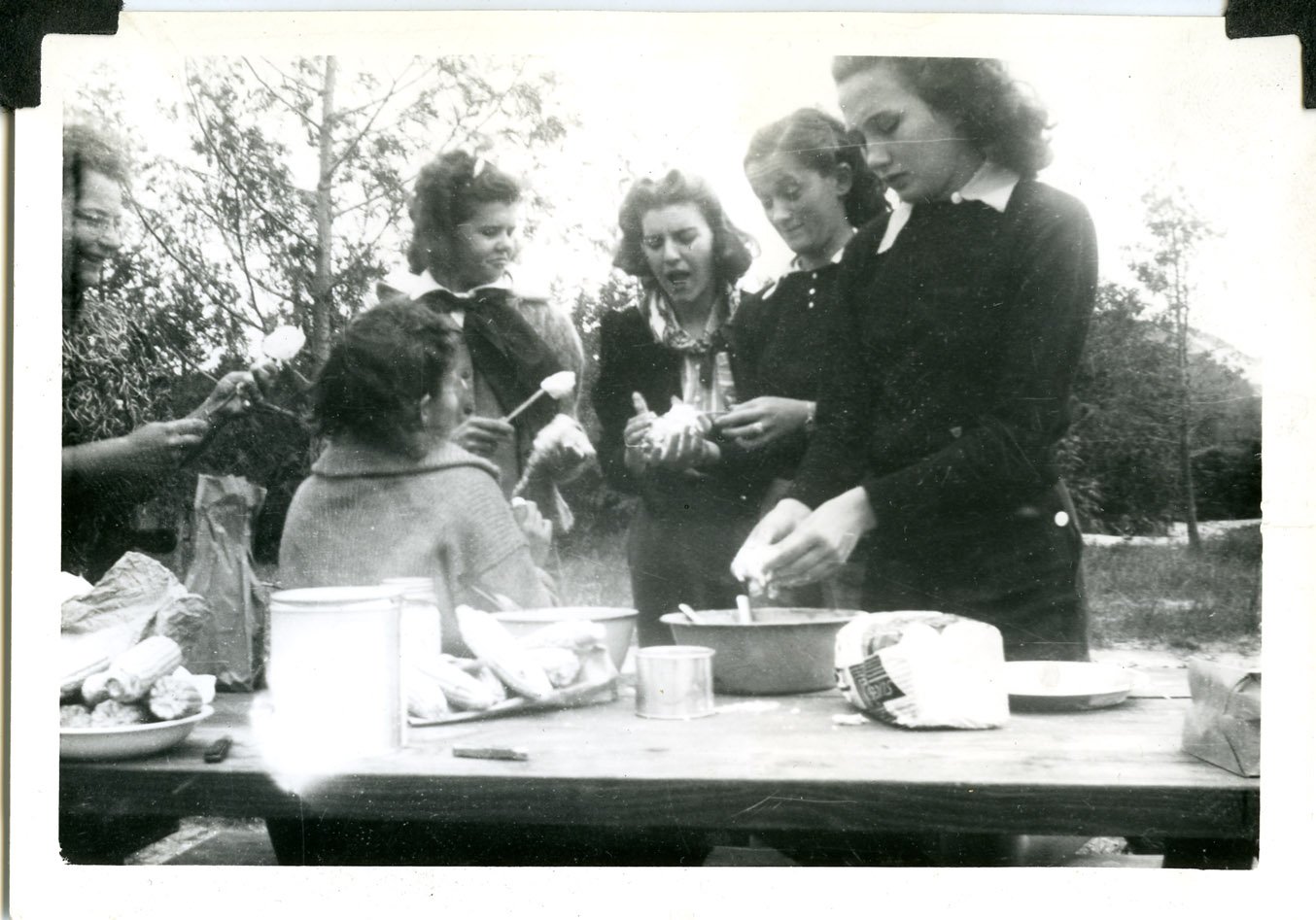 The second day the girls rode their bikes through Traverse City and turned north on Highway 22 on the west side of Grand Traverse Bay. After a few miles, they turned west and rode through Cedar, across the peninsula, over sand dunes, across flat stretches, and over hills to Empire, which is located on Lake Michigan. There they cooked supper over a campfire and stayed in a beach cabin. They had ridden approximately 26 miles that day. 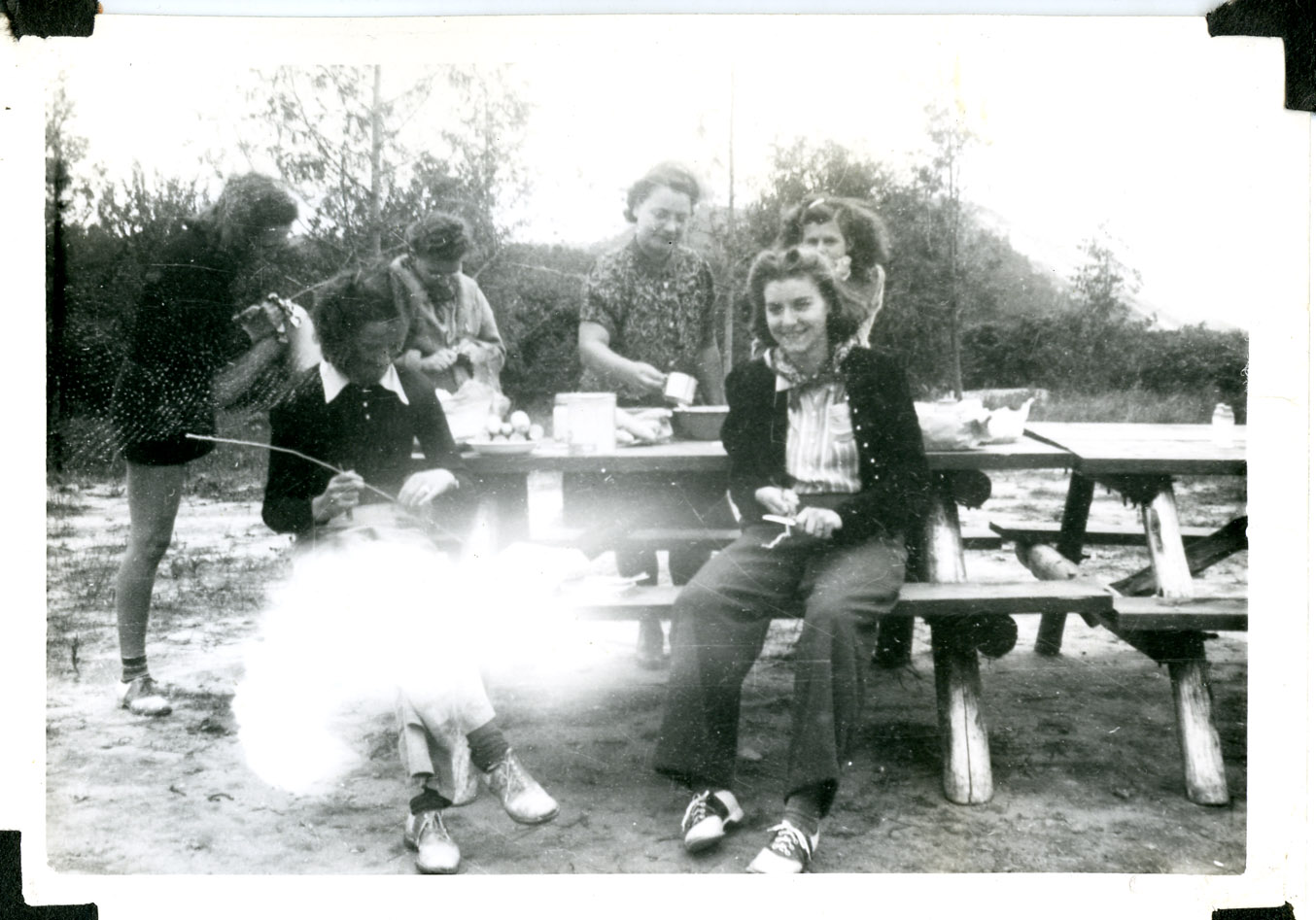 The third day they rode the 22 miles from Empire to Frankfort. Their Home Economics teacher was spending her summer with her parents and family in Frankfort so the girls stopped to visit her there. Much to the girls' surprise, their teacher had two brothers their same age. They visited her family for about an hour and got back on their bikes to head east toward Beulah. The hardest riding for the girls was in this area around Crystal Lake. Their calves ached as they pushed hard on the pedals to make it up to the tops of those hills. Sometimes they got off of their bikes to push. Once that day, Irene was pumping up a hill in the left lane of the road. Rose, the chaperone, called to her and made her come back over to the right lane. Irene was irked! She could not understand why she couldn’t ride in left lane. No one else was in it. A few years later she realized that a car approaching from the opposite direction over the top of the hill would have creamed her. She laughs about her teen reactions now. Irene says that she can still feel the muscles in the back of her legs today when she thinks about it. The girls liked coasting down the hills, the speed creating a nice breeze, which was a welcome respite from the heat. They rode about 35 miles that day. 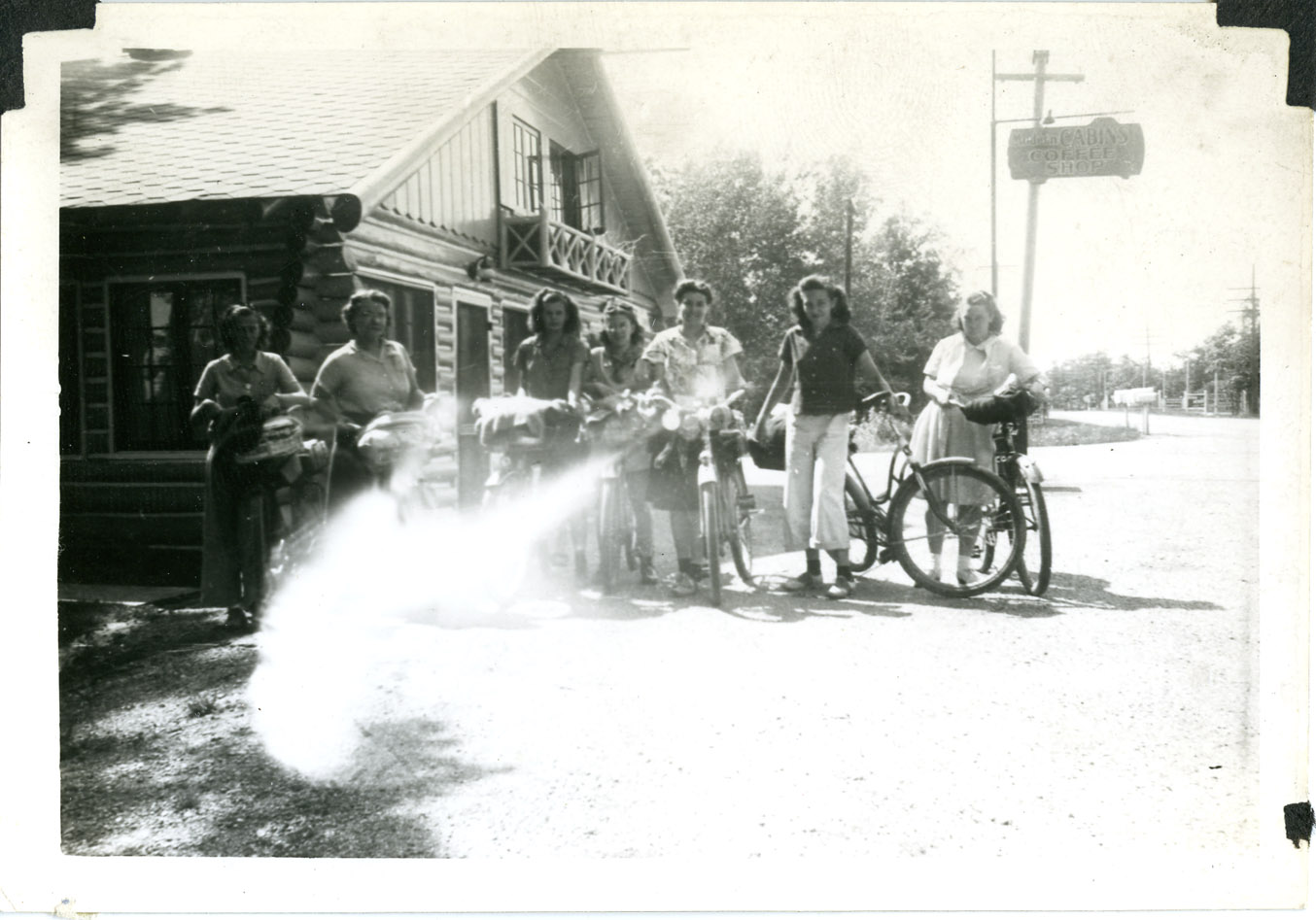 The next day, Thursday, it rained until mid-afternoon. Two of the girls' mothers drove over from Mancelona, found the girls, and brought them rainwear. Barbara remembers that her mother brought her a pair of rubbers to put on over her shoes. The rubbers were made for shoes with heels and she couldn’t put them on over her flat saddle shoes. The girls rode into Traverse City from the south. It was not a long riding day so they checked into the Shadowland Cabins for the second time to stay that night and then went shopping at a gift shop. Each of the girls bought themselves a black pottery whistle. They also bought Bernice, the girl who fell ill before the trip, a pair of fringed, beaded leather bedroom slippers which she still has to this day. Stevie and Carol remember that all of the girls and chaperones went to the Northwestern Michigan Fair that evening in Traverse City. They rode the ferris wheel, merry-go-round, and other rides. They walked around, saw all the exhibits, and had a great time.

The last day, Friday, the girls rode to Elk Rapids and from there back to Alden, 12 miles from home. It was Friday and Band Concert night in Mancelona. The girls decided to go home for the Band Concert. After riding about eight miles, they grew thirsty. Irene thought they might be able to get water from the outside pump at a country school, the Woodlawn School. When the girls arrived at the school, the pump was turned off for the summer, so, still thirsty, they rode the two and a half miles into Mancelona. It was getting dark and Carol remembers that they turned on their flashlights so that people could see them riding their bikes at dusk. The girls blew their black pottery whistles as they, the Cycling Seven, rode their bicycles to the Band Concert in the park. The townspeople were glad to see the girls, and the girls were thrilled to have had their bike trip and were happy to make a grand entrance back home. 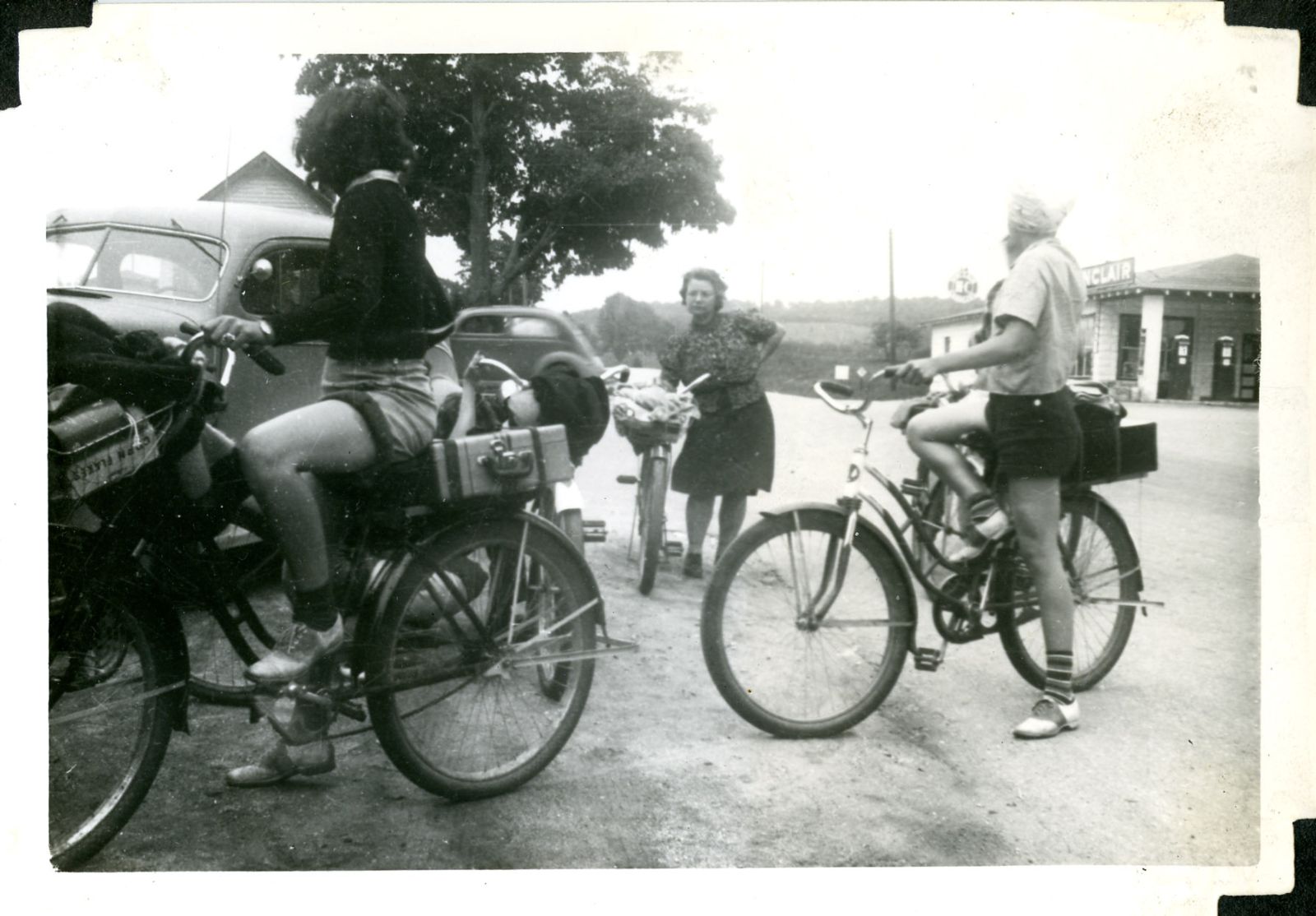 You will note that in the pictures some girls had short shorts on. Shorts came into vogue about 1935, but they came down just above the knees. In those days, short shorts were just not worn, but the girls were perspiring and so hot that they rolled the shorts legs up to cool off and that is why they have short shorts on. About 1938, cotton slacks came into style. The girls had each packed a pair of cotton slacks to wear when the weather was cool, and they all wore saddle shoes. Interestingly, the chaperones wore cotton skirts and blouses, as seen in the pictures.

Though the chaperones, Emma and Rose, have passed away, the girls are all still living and remember their bicycle trip fondly. They are doing well for being either 87 or 88 years of age.

NORMA JEAN BLAIR-GILMORE was born in Mancelona, Michigan, 40 miles south of Petoskey. She lives in Hamilton, Montana, near her two sons. You can watch her video interview, The Cycling Eight, produced by  Heather Andrews, to learn more details about her trip.