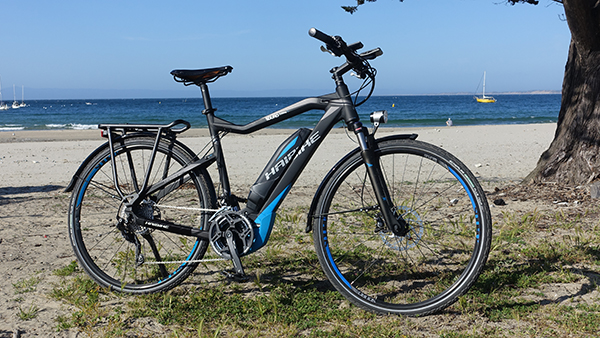 A few weeks before the Sea Otter Classic cycling festival, I was offered an eBike from Haibike with idea that I would commute to and from the event aboard it each day. Most Sea Otter attendees stay in Monterey, California, and then drive the 13 miles to the Laguna Seca race track venue. In just over a dozen miles, the route to the track also climbs nearly 1,000 feet. Because of that, the idea of laboring my way there on a traditional bike — before a day on my feet at meetings — was less than appealing. An electric-assist bicycle seemed like a great alternative, better than both a traditional bike and driving, sitting in the usual traffic on the route.

The idea was made all the more appealing by the model I was offered, Haibike’s SDuro Trekking 5.0, with fenders, lights, and a rear rack. Priced at $3,599, its comfortable, upright position inspires confidence and the Yamaha PW mid-drive motor keeps the majority of the bike’s weight low and centered front to back. A Suntour suspension fork and wide tires smoothed the road nicely. I brought along a rear pannier, in which I could carry the backpack I used during the day.

Instead of bogging down in technical details, I’d like to focus on the experience of pedaling the bike along bike paths and up the steep climb to the Sea Otter venue. But it is worth noting that the SDuro Trekking 5.0 is a pedal-assist model — there is no throttle. As you increase your effort, the bike matches you, increasing its output as you pedal harder. The amount of assistance is adjustable as well. The Yamaha has five settings: Off, Econ+, Econ, Standard, and High. These are easily changed on the fly using a small switch on the handlebar that also turns on the front and rear lights and toggles between fields on the computer display. Battery life is obviously an important item to monitor and the Yamaha display shows both battery level and estimated mileage range. As you increase the amount of assistance, you can quickly see the range decrease.

I spent much of my time aboard the Haibike in Econ mode, saving Standard and High for the steepest pitches. On my first commute, I used approximately half of the bike’s battery life. It’s important to point out that on flat ground the bike is far more efficient than it is on the steeper hills. Headed downhill on my return trip — but this time with a headwind — I used about a quarter of the battery. (Haibike charged my bike during the day so that I could make the next round-trip with an overnight charge at the hotel).

Because the electric assist cuts out above 20 miles per hour, you don’t find yourself barreling dangerously down hills. That said, the bike is hefty, weighing in at 51 pounds for a size large, and the increased weight is something extra to manage. Thankfully the power of the electric motor more than compensates for its own weight when moving along. On the flip side, hydraulic disc brakes certainly help and thanks to them I was able to quickly scrub speed whenever needed.

What was exceptionally interesting to me was the fact that my time from the hotel to the venue, up the large hill, was only one minute slower that the duration of the ride back. Obviously I used twice the amount of battery charge, but I didn’t work any harder. That is very impressive.

While there are some pioneering folks currently taking on long tours aboard eBikes, the good news is that they’ll only become more efficient in the future. Batteries will get smaller and lighter. Software will make them feel even more seamless in their delivery of power. Pricing should also continue to come down. While the Haibike SDuro Trekking 5.0 isn’t inexpensive at $3,599, it does come with fenders, a rear rack, and lights. And as it sits, it would serve as a phenomenal commuter or a way to for two riders of disparate abilities to get out for a pedal together. EBikes are not the future — they’re here. If you find yourself scoffing, I would recommend you give one a try. The proof is in the pudding and the mainstream cycling industry’s dirty little secret surrounding eBikes is that they’re great fun.

Nick Legan is the Technical Editor of Adventure Cyclist.