Each year Quality Bicycle Products (QBP) invites approximately 325 dealers to attend SaddleDrive held at the Northstar resort near Truckee, California. The event serves as an introduction to upcoming models, a glimpse at new colors, and a chance to peer into QBP’s crystal ball. It’s also a chance to demo bikes on mountain bike trails, gravel roads, and pavement.

As a reminder, QBP brands include Salsa, Surly, All-City, Heller, Civia, iSSi, and others. Many of their bicycles and products are aimed directly at the adventure cycling crowd — Salsa's tagline is “Adventure by Bike,” and Surly’s Long Haul Trucker has long been a touring favorite. I was able to get aboard several new models, just announced, as well as a few bikes that will be unveiled in coming months (due to an embargo, you won't be seeing those impressions for a while, but stay tuned this fall!). Here’s a quick look at some updates and one-ride reviews of several bike models. 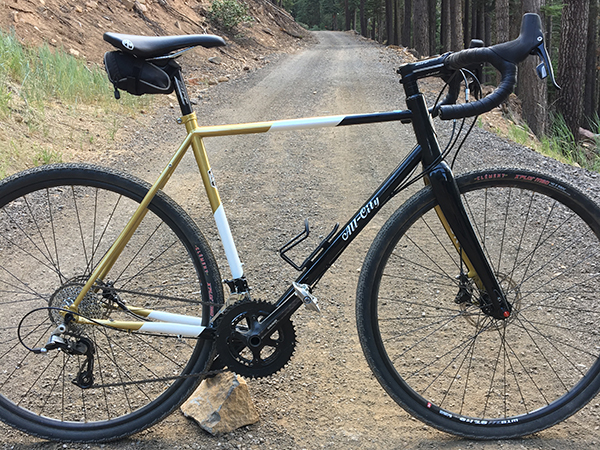 First focusing as a brand on fixed gear bikes and singlespeed options, All-City has expanded its line to include road, touring, and mountain bike models. The Space Horse Disc will feature in an upcoming issue of Adventure Cyclist. At SaddleDrive, All-City debuted its new Cosmic Stallion “all road” bicycle. We’ll call it a gravel bike.

Here are the highlights:

I got out for a longer ride on the Cosmic Stallion and I was happy to have the time aboard it. I rode a 55cm and it provided a lively feeling, stiff enough when stomping on the pedals, but not harsh over rough surfaces. It felt like a very high-quality custom steel bike (of which I own three). My ride included chunky gravel, dirt doubletrack, some sand, and a tarmac finish. In each case, the stellar pony was surefooted and inspired confidence. Somewhat surprisingly though, I did experience toe overlap (the front of my shoe hit the tire when a pedal was at the three o’clock position and the bars were turned sharply).

In all, the Cosmic Stallion is a great option for someone looking for a mixed-surface bike. The rear rack mounts are a nod to touring cyclists, but I think that bikes like this are best used with bikepacking bags. The gearing is certainly oriented to spirited riding, not slow cruises with a host of luggage. 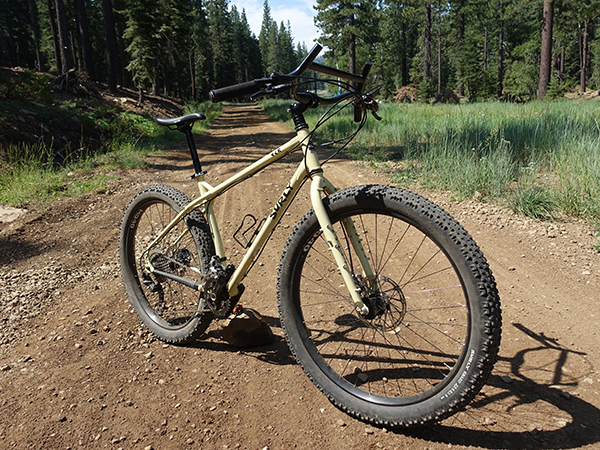 The affordable steel bicycle brand continues to innovate while offering great bikes that focus on getting out and riding without breaking the bank. The $1,899 ECR plus bike already has quite a cult following among off-road touring cyclists. It was recently updated with thru-axles, a new handlebar, and now uses both 27.5+ and 29+ wheels/tires depending on frame size.

Extra-small through medium sizes come with 27.5+ wheels (also compatible with standard 29-in. wheels), and medium through extra-large frames are made for 29 x 3.0-in. tires. Note that there are two separate medium bikes offered, and the wheels are not interchangeable. Surly’s new Moloko bar replaces the Jones Loop that previously came on the bike. Like the Jones, the Moloko offers multiple hand positions and plenty of space to attach accessories and bags.

I had a chance to climb a dirt and gravel service road and then make my way back to the expo via mountain bike trails dotted with embedded rocks and root ledges. The ECR impressed with its straight line stability. Built to carry a load, it still performs admirably as a mountain bike when unladen. It’s not as agile as the Krampus but still a lot of fun. The plus tires work especially well on rigid bikes, improving traction and comfort simultaneously. The downside is additional weight.

The Moloko handlebars may look funny, but they do provide multiple comfortable hand positions. Also available aftermarket, they are a great choice for a bike like the ECR where big miles are planned.

The ECR, especially with its updates, is one that intrigues us and we’re planning on a longer term test in the coming months. Stay tuned. 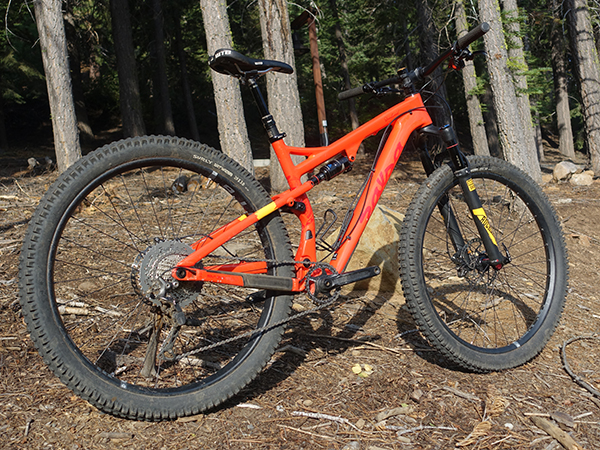 Salsa, with its Fargo and Marrakesh models, appreciates the needs of adventure cyclists. Many of its other models are aimed at more mainstream needs but still feature small details that bikepackers will appreciate. The recently relaunched Deadwood 29+ borrows from its predecessor with 29 x 3-in. tires but adds 100mm of front suspension and 91mm of rear suspension to the mix. Those suspension figures are typical of a cross-country race bike. But the Deadwood uses a more modern, slack head tube angle, and the $4,499 XT model I rode also arrives with a dropper post.

While the Deadwood was a bit of a head-scratcher at first, the more I rode it the more I began to see its potential. For riders looking to float over technical terrain, the Deadwood delivers, due in no small way to its enormous tires. It turns in surprisingly well too, with a slightly higher bottom bracket to encourage it to do so. It’s a new kind of trail bike, made for long days where stability and traction are key. The 29+ wheels and tires track wonderfully, but they are a hindrance on long climbs. The added heft keeps it from feeling like a rocket when accelerating, but the large tires also help you clear technical sections, allowing you to pile on the power. 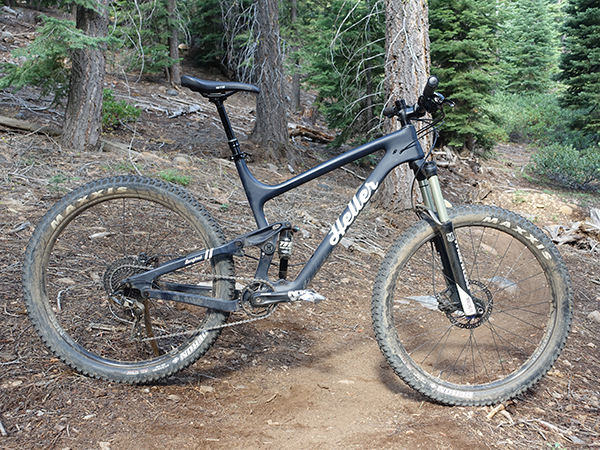 If you’re a rider looking to maximize performance for every dollar spent on your bike, take a look at Heller. It’s a new brand, only one-and-a-half years old. But the company’s carbon bikes offer a great return for the outlay. Heller’s newest model is the Barghest, a full-carbon (the swing arm and rocker are carbon too) dual suspension 27.5+ trail bike that sells for $3,000.

Manitou handles the suspension front and rear, with 140mm up front and 130mm in back. SRAM’s NX 1x drivetrain is complemented by hydraulic Tektro brakes, Sun Ringlé rims, Maxxis Rekon tires, and a TranzX dropper post.

The frame has a threaded bottom bracket (Hallelujah!) and provisions for a front derailer if you choose to buy a frame and build it up or modify the stock build. The geometry is not as slack or low as many modern mountain bikes, but I think this is a good thing. The super slack head tubes and low bottom brackets are made for blasting down trails. They are designed to work well at speed, but not all of us are that fast or interested in taking those chances. So while some may criticize Heller for this, I applaud them for building a bike on which a value-conscious, intermediate rider will feel confident, both in terms of money spent and turns taken on the trail. 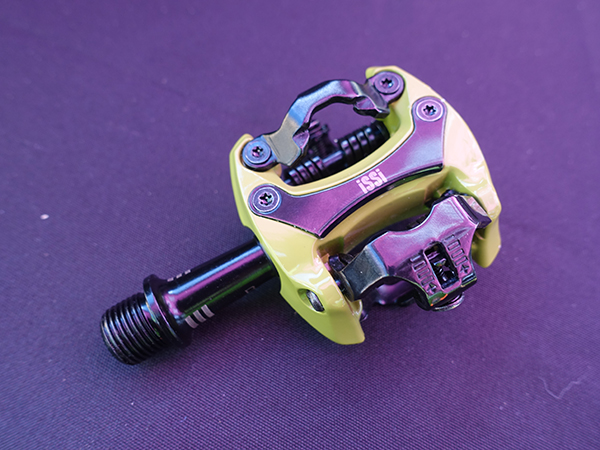 Personalizing your bike can take many forms. But any time you can coordinate the looks of your bike while also optimizing your biomechanics, you’ve got to call it a win. iSSi offers its Flash clipless pedals in a rainbow of colors, allowing you to add attractive accents to your bicycle. Likewise iSSi produces three different spindle lengths to dial in your personal fit. Continuing on a theme of three, most models are offered with three different bearing options: one with a double bushing, one with a bearing/bushing, and one with a triple bearing configuration. The Flash III, with triple bearings, retails for $110.

The Flash pedal is a recently updated double-sided, SPD-compatible clipless pedal. It was used on many of the demo bikes at SaddleDrive. And I can say from personal experience that the update is a successful one. Previous versions didn’t engage as positively as the new model does. The new Flash is also perfectly compatible with Shimano SPD cleats. I had a set of Shimano cleats on my shoes during the demo and they clipped in and out as seamlessly as they do on my personal Shimano pedals. Like the Surly ECR, we have a set of pedals on the way for a longer-term review.