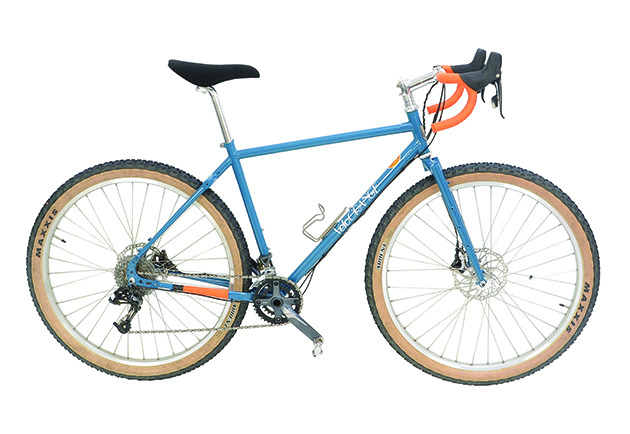 This review appears in the December 2016/January 2017 issue of Adventure Cyclist. See the video review here or below.

You have to admire a bike-company president who’ll give his own personal machine to a reviewer.

I mean, talk about confidence in the product. What if the mook calls his baby a mutt?

But Chris Kulczycki of Velo Orange wasn’t sweating over what I might have to say about his Piolet. He was too busy selling them.

“I’d love to send you a new Piolet, but we’re out of size large,” he said via email in January 2016. “They’ve been selling like the proverbial hotcakes.”

Kulczycki proposed lending me his personal bike, which had just been built up, but that window of opportunity wouldn’t stay open long (he had a mini-tour scheduled in mid-February and needed it back fast). So I said I’d be happy to wait for the spring shipment.

And whaddaya know? I ended up getting his personal bike anyway because the spring shipment of Piolets had been selling like the proverbial … well, you know.

Kulczycki actually outfitted his Piolet as a test model, but not for the sporting press, according to “Number Two,” which is what the Velo Orange folks call his right-hand man, Scott Gater.

“He built it up as a bit of test bike in order to try out some stuff,” said Gater. “We went hydraulic on his, as we wanted to see what it was all about. We have a disc Pass Hunter here with Shimano hydraulics, so it was interesting to see the differences between the two.”

Regardless of how it stops, what the Piolet is all about is adventure touring. The double-butted chromoly frame and its segmented, straight-legged fork are aimed squarely at dirt and gravel roads, double- and singletrack.

Billed as “sturdy, simple, and very capable,” the sky-blue Piolet — its namesake is a double-headed ice ax used in mountaineering — has bosses for just about everything you can think of and a few you probably can’t, from racks and fenders to oversized bottles and gear storage. I expect you could even clip a piolet to your Piolet if need be.

Because it’s available only as a frameset rather than a ready-to-ride machine, the Piolet can be whatever you want it to be. Unencumbered gravel bike? Shred, Ned. Traditional loaded touring? Add a rack, Jack. Bikepacking? No prob’, Bob.

The Piolet rides equally well with weight up front, behind, in between, or with some combination thereof. And you can direct it with whichever sort of handlebar suits your riding style. Order your bits along with your Piolet and you’ll get a 10-percent discount.

Mine — well, Chris’s — arrived at Two Wheel Drive in Albuquerque wearing an interesting blend of road and off-road gear, pretty much everything I needed to get rolling right away, including an oversized Mojave water-bottle cage and VO Grand Cru Sabot flat pedals.

The low end of 26x36 (21.1 gear inches) was plenty kind to me on the climbs, and since I have no objection to coasting on long, fast descents, I never missed having a bigger “big” ring.

And while the 29 x 2.4in. Maxxis Ardents initially looked like too much rubber, even for such a robust bike, a quick peek in the garage reminded me that I ride the same tires on my Jones 29er (see my review in the October/November 2013 issue) and they’ve proven more or less ideal for the Duke City trails. Big rubber and low pressures are your friends on a rigid bike, especially when you’re thundering through a gauntlet of New Mexican rocks that vary from brick-shaped to knife-like.

Likewise indispensable are reliable brakes, and the SRAM hydraulics are that and then some. They’ll certainly spare you a set of white knuckles after an extended descent on sketchy surfaces. But as an unskilled mechanic, I wonder about home maintenance and roadside repair, especially out in the sorts of places the Piolet is intended to go.

“Most of us here run mechanical disc brakes,” said Gater. “Why? Well, I think backcountry reliability is one aspect. The fact that they are less expensive than hydraulic and easier to set up also has to come into play.”

With a bike so clearly geared for the outback, I spent most of our time together riding the Piolet on the local trail network, first as a sort of cyclocross bike that you’d never need to dismount and carry, then as a bikepacking rig with Revelate’s Tangle, Pika, and Sweetroll bags.

Riding the Piolet unloaded, I found the 2.4in. tires a little cumbersome for spirited dropbar dashes around our narrow, twisty singletrack. I run 29 x 2.0in. tires on my Co-Motion Divide Rohloff (see the December 2013 issue), and for swift, sweaty exercise, smaller feels better.

But once I started adding bags and weight, the big rubber was a must-have, and the surefooted Piolet navigated the rockiest trails like a sturdy burro. It’s designed for those 2.4s, and you can go even bigger if you like. Smaller burros get shod accordingly— small and extra-small frames use 26-inch wheels because they’re easier to replace in the field than 650b, especially if that field is in a remote corner of Outer Boondockistan.

With a starting point of $685 for frame and fork, it should be a simple thing to rig your Piolet for medium-heavy, field-repairable adventure without causing your Visa card to burst into flames. And that’s the whole point, according to Number Two.

“I get kinda turned off at looking at blogs and sites with $5,000 builds of trick stuff that most folks with a regular job can only drool at,” said Gater. “Makes it all look unobtainable … whereas in reality, you can get a good setup for a lot less and have the same amount of fun, if not more, ‘cause you have some money left over for a beer or soda after the ride.”

Ah, the ride, that’s the thing. It’s where the rubber meets the road, or a lack thereof. More than a few of those $5,000 builds, especially of the racing variety, look like sculptures, some artist’s interpretation of the bicycle better suited to genteel display than to hard use. The Piolet looks more like a tool, one you can use to build a mental gallery of memorable adventures.

Patrick O’Grady has written and cartooned about cycling since 1989 for VeloNews, Bicycle Retailer & Industry News, and a variety of other publications. To read more from Patrick, visit maddogmedia.wordpress.com