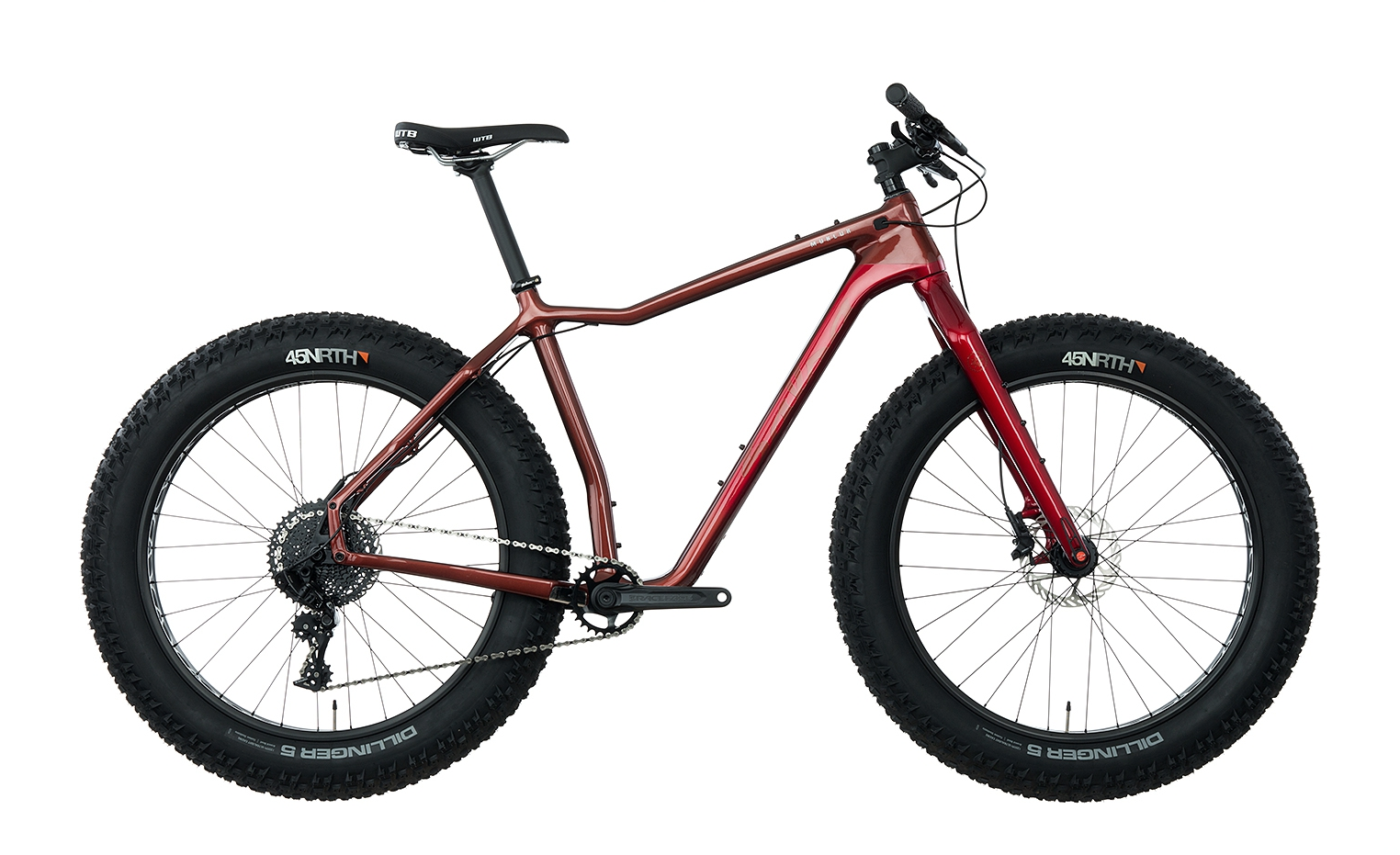 By Ally Mabry and Alex Strickland

Last fall Adventure Cyclist Lead Designer Ally Mabry and Editor-in-Chief Alex Strickland both bought a 2017 Salsa Mukluk GX1. Not unusual perhaps, except that they didn’t know each other yet — Mabry wouldn’t start at the magazine for another few months. Now these “Muk Twins” have a few months on their identical machines (the only difference is Mabry rides a medium and Strickland a large). Here are their impressions on one of the most popular fat bikes out there.

This bike looks equipped for any condition — is it a year-round option for a mountain bike?

Mabry: The Muk is definitely equipped for any condition — no doubt about that. Riding this bike makes me feel like an omnipotent, landscape-thrashing snow monster. Still, if I had to choose my apocalypse bike, this would not be the one. Some mountain bikes are pretty alright around-town commuters on pavement. This one? Def not. As a mega proponent of “riding to the ride” whenever possible (especially because I don’t own a car) I generate so much body heat making these wheels turn that by the time I’ve reached the trailhead, I’ve usually shed multiple layers of winter gear and I’m most definitely breathing heavily. That said, the handling on this bike is so zippy that riding dirt is quite fun when there’s a lack of snow, but the drawback to having a bike that can ride over literally anything is that it is slow on pavement. If you desire a bike that sounds and feels like a motorcycle and is just about as well equipped, well, maybe you’re the next Muk Twin.

Strickland: It can be done, but should it? No, probably not. I’ve been riding a rigid 29+ mountain bike for a few seasons and when the Mukluk arrived I had the idea that it might replace the 29+ and provide a winter riding solution all in one. But after a few rides on dirt before the snow started to fly, I changed my tune. The main issue is the massive Q Factor demanded by the 4.8in. tires — I just don’t want to pedal this thing all the time, and we don’t have a lot of sand in Western Montana that might make it more useful. I’ve really enjoyed the Salsa on the snow, but if I couldn’t have a quiver, this wouldn’t be my only bike.

This model uses a SRAM GX-based drivetrain with a 28T chainring (from Race Face) and 11-42T cassette (from SunRace). How’s the gearing?

M: GREAT. Seriously, it’s great. The gearing lends itself to mountain goat climbing capabilities on trail. For a bike with tires the size of pool floaties, it’s impressive how easily I can mash up anything in the granniest of granny gears.

S: It’s easy to spin out on tarmac, but that’s not what this thing’s for. The 28T makes it easy to keep torque low on less consolidated snow. The GX shifter has a nice action and the Race Face/SunRace combo seems durable.

M: As much as I enjoy a good rip around local trails, I prefer riding impossibly long distances with too much junk strapped to my bike (some call this bikepacking). This bike has a cushy upright riding position with geometry that balances stability and light handling, which makes it perfect for touring. Even though it’s carbon, it doesn’t lack attachment points for racks and stuff-holders when venturing into the backcountry for a few days. The stock 45NRTH Dillinger tires come unstudded, although you can install studs yourself if you so desire, which is great because I’m quickly learning how easy it is to eat it going around a sharp turn on an icy road. As with most fat bikes, the Q Factor on the Mukluk is extra wide to accommodate massive tires, which was definitely weird for me at first, though I’ve gotten used to it.

S: In theory, SRAM’s Level brakes are superior to offerings from Shimano in frigid temps because DOT fluid has a lower operating threshold than the mineral oil in the lines of Shimano brakes. Our winter has been mild so far, and my personal preference leans to the instant-on bite of Shimanos, but the Levels have been fade-free and predictable, despite Salsa’s decision to spec small 160mm rotors front and rear.

The Dillinger 5 tires are fantastic and studdable if your local conditions demand it. I’ve run my without studs so far and found traction predictable if not always abundant when ice shows up.

M: Having just moved to the frigid alpine tundra of Missoula, Montana, I eagerly purchased a set of upcycled Alaska/Canada-ready pogies from Doug of coldbike.wordpress.com in anticipation of winter. I would 10/10 recommend that you do the same, and make sure yours are also GREAT colors. Unfortunately, we’re three months into winter now and it’s proving to be mild so far, but if the Great Polar Vortex happens upon us, I will so be ready. I’ve also equipped my Muk with a Porcelain Rocket 52HZ waterproof framebag (for snacks, layers, and tools) and a Randi Jo Fabrications Bartender Bag for a water bottle.

S: I’d planned to use the Mukluk to commute during snowy stretches, and while regular thaws haven’t demanded full-on fat bike commutes, the Mud Shovel fenders from Portland Design Works were practically mandatory equipment for riding to and from work. Big tires throw a lot of water and slop when things start to melt — without some fenders it would be unbearably messy. I also put an X-Fusion Manic dropper post on the Muk, which remains the best upgrade any off-road bike can get.

M: I spent a lot of time going back and forth between this bike and a Surly Wednesday (because let’s face it, I’m a steel gal at heart), but in the end chose the Salsa Mukluk GX1 after being given some solid advice from my bike sensei Nick Carman: “A carbon fatbike can still be tough in some of the best conditions. Get it, make your life as easy as possible.” I am so glad I did. (Nick, who’s probably your bike sensei too, is also a Muk Twin, it turns out!) The truth is, before purchasing my Muk I’d stalked Alex enough during interview prep to know he’d already bought one for himself. What other human on this planet can say they have the same carbon fat bike as their Editor-in-Chief? Answer: One. It’s me.

S: The Mukluk is the first true fat bike I’ve owned and/or spent a lot of time on and my overall feelings are mixed. The thing is really fun on local groomed trails and there’s no doubt it’s gotten me out pedaling through the winter far more than ever before. My performance complaints could probably be mitigated by dropping the stem a bit and maybe swapping to a wider flat bar to lower the riding position into a slightly more aggressive stance. My aesthetic complaints are a little tougher to mitigate. I didn’t buy the Mukluk with dreams of long bikepacking trips aboard the big tires, so the huge triangle’s ability to eat a ton of luggage in a framebag is a feature I don’t need. I would gladly trade a few (dozen?) cubic inches of triangle space for a lower top tube. I can’t fault the odd angle in front of the bottom bracket for any practical reason (it too adds cargo space), but contributes to the fact that the Mukluk is not a pretty bike.

That said, the carbon frame is the key to the bike’s sub-30lbs. weight, which might not seem like much, but riding buddies on steel fat bikes approaching 40 lbs. make a carbon fat bike seem more than worth the extra cost with each mile.

Ally Mabry is the Lead Designer for Adventure Cyclist, Alex Strickland is the Editor-in-Chief.