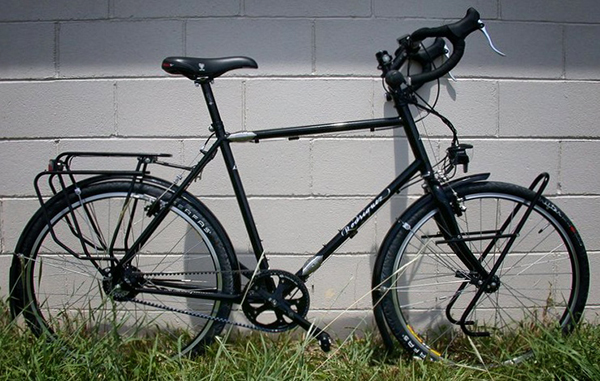 I ride in rural Kansas where village streets are poorly patched, buckle, and pitch up and down. I also ride on unpaved dirt or sandy roads. Even the smoother and more scenic routes have a fine dust that settles into chains, bearings, and frame interiors. I hoped to find a touring bicycle resistant to dust, limestone, and sand. I wanted it to be very strong, plus lightweight for longer-distance riding.

After completing more than a year of research and tentatively deciding on a manufacturer and model, I was fortunate to stumble across rodcycle.com, the R+E Cycles (Rodriguez & Erickson) website. After all my research, I had a clear idea of what I wanted, but their website really expanded my options and made me question my assumptions. Multiple email exchanges later, I decided to check out the shop and its owner, Dan Towle, in Seattle to get a real professional fitting. And if I liked what I saw, I’d be ready to order a Rodriguez Make Shift High Roller Travel Tour. I had no idea what to expect so I arrived with excitement, of course, but uncertainty too. My fitting took nearly three hours with the smallest adjustments considered as I pedaled to provide constant feedback. The experience was priceless, not only for the exceptional fit of my new bicycle, but for the extra time in the shop making component choices and learning from the expert staff.

Since I ordered the travel option with S&S couplers, my bicycle arrived packed in a soft-sided, backpack-type travel bag. Assembly of frame halves, fork and associated pieces, handlebar, and hub-wheel-tire assemblies is not difficult. Then adding racks and fenders, combining cables with a computer and lights, adds up to a two-to-three-hour project. Curiously, disassembling, padding, and packing is more complicated mentally, yet it requires about half the time. There is a set method to disassemble and pack the bicycle, which seems impossibly complicated, and requires careful referral to directions but quickly becomes habit. When worn, the 40-pound backpack is easy to maneuver through airports, motels, and other crowded or tight spots.

The most common reasoning for investing in an S&S coupled travel option is the ease and convenience suitcase conveyance provides. The comparatively minor expense of ticketing an extra suitcase diminishes risk and coordination and provides confidence in a direct chain of custody.

The Rohloff Speedhub has been predictably impressive. Gear shifts coincide instantaneously with movement of the speed selector and a split-second hesitation in pedaling provides a clean shift. This is wonderful for loaded touring! After reading about noise in gearhubs, I noticed no sound from gears 14 (highest) through eight, while gear seven introduced a gear whir comparable to a chain, which increased with lower gears. I didn’t find it objectionable, finding instead a tireless coach that helped me realize the sound should be a smooth, consistent whir and not a jerky pulsing.

The 55-tooth belt-ring gear and 20-tooth cog gear chosen for my bicycle was ideally suited for my riding style and I was relieved pedaling around Rocky Mountain National Park to remain at or above gear four, leaving some gearing for tiring legs. 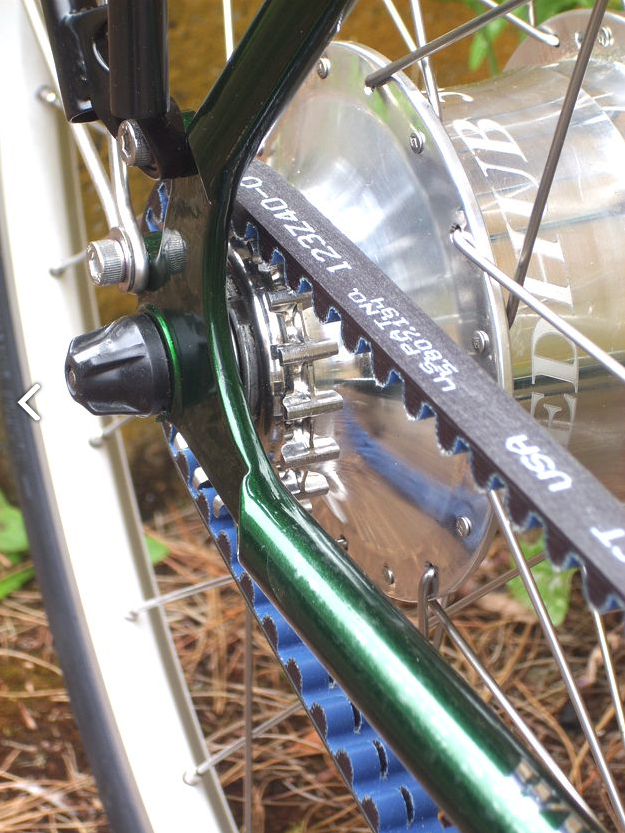 The belt is very quiet and very durable if not mistreated. One can use either a chain or a belt with a gearhub; however use of a belt drive on touring or road bicycles requires a gearhub of some sort. Since a belt does not come apart like a chain, a gate is required. This is usually located on the seat stay, which can be opened to slip the belt outside the frame. The belt is tensioned by rotating the eccentric bottom bracket through its highest rotating arc. When changing a tire, the eccentric is rotated back, loosening the belt off the ring and cog; shifting cables are easily removed from the hub with nifty devices called cable-splitters. I have changed the back wheel six or seven times to repair flat tires and find it comparatively easier than derailer-equipped bicycles.

The Big-Squeeze Brakes are a sophisticated proprietary design manufactured by Rodriguez that at first glance look like cantilever brakes of old. But these are pulled and pivoted from the bottom, which significantly increases leverage and maintains it consistently through the entire pull. In practice that translates to a light-to-moderate finger pull engaging effective braking that is smooth, quick, and silent. I was pretty committed to wanting disc brakes when I started the process, but as I began to consider the S&S travel option, read the Big-Squeeze material and several testimonials, I began to think about the damage protruding rotors could cause to everything in a soft pack suitcase. I am very happy with the Big-Squeeze models, and since these brakes are sold as aftermarket components, they are well worth considering as an upgrade to any bike.

The OX Platinum True Temper Reynolds frame absorbs the worst of brutal jolts, returning with a soft, unnoticeable rebound. The tubing’s very high tensile strength allows a thin frame to reduce weight and a self-annealing characteristic makes the welds stronger than the tubing. On a section of old highway near my home where the road is cracked across its width every 15 or 20 feet, the springy nature of this frame really is noticeable and pleasing. The frame with S&S couplings, rear brake assembly, and Bushnell eccentric bottom bracket incorporating a Phil Wood sealed bearing assembly weighs about 5.5 pounds. The tandem-grade fork with brake assembly weighs about 6.5 pounds by itself. The complete bicycle with wheels, tires, dynamo, gearhub, lights, front and rear Tubus racks, pedals, bottle cages, and saddle weighs in at 31 pounds.

My Rodriguez is a beautiful, phenomenal touring bike that reflects the dedication of the small shop and the great people who designed and crafted it. Besides touring bicycles, Rodriguez makes town and commuter models, road and mountain types, randoneur and racing machines.

In the evenings, when I ride the Rodriguez out past my mailbox onto the gentle downhill of the crushed limestone road and over the soft bump of the railroad tracks, it feels like this great bike is taking me for a ride into the waning sunset.

Jack Nicholson bicycles high and low, on pavement, gravel, dirt and sand, anywhere he and his bicycle can be together. He is an artist and writer, please visit nicholsonart.com.