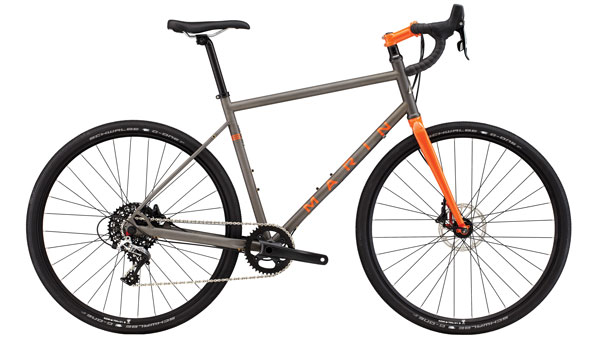 This review appears in the May 2016 issue of Adventure Cyclist. See the video review here or below.

My, how times do change.

The 2016 Four Corners Elite is still steel, but that’s about where the resemblance to its ancestor ends. For Marin’s 30th anniversary, the $2,309 Four Corners Elite got a butted and formed Columbus Thron frame with internally routed cables, a 1x11 SRAM Rival drivetrain and hydraulic disc brakes, and Naild quick-release–style thru-axles.

Long story short: this is not your grandfather’s touring bike. The Four Corners has been rebooted for “adventure touring,” said Marin Brand Director Chris Holmes.

“Our pavement product manager, Aaron Abrams, recognized the resurgence in touring and those looking to explore more than just paved roads, so he took the tried-and-true touring bike and updated it based on where the market was heading, giving a bit more ‘off-roadability’ to the segment,” Holmes added. 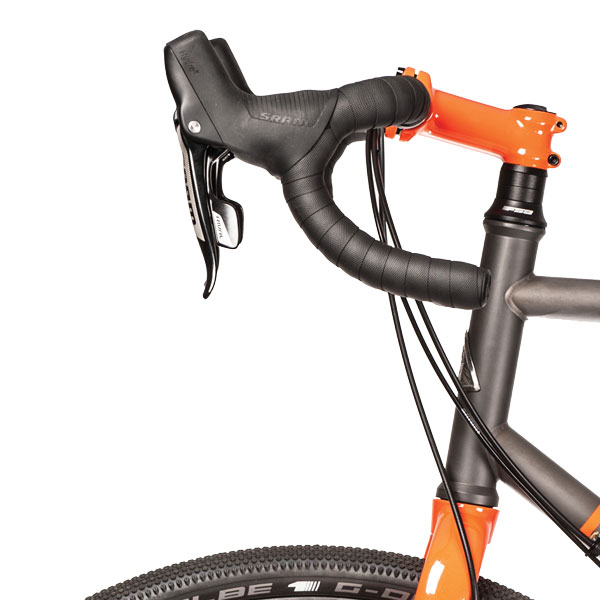 It was another Marin, the Gestalt, that first caught my eye as the Adventure Cyclist staff and I prowled the floor during last fall’s Interbike trade show. But the editors steered me toward the Four Corners Elite, and I’m glad they did.

In January, I had just wrapped up a review of the Salsa Marrakesh, which is a more traditional touring bike — a big, burly, globetrotting beast of a machine, and probably too much bike for the casual sort of outing I prefer (see the April issue for that review).

The Four Corners Elite looked and felt more like the cyclocross bikes I favor as daily drivers, particularly when I took it off pavement and onto the trails crisscrossing the Sandia foothills near my Albuquerque home, and later during a week of riding singletrack in McDowell Mountain Regional Park outside Fountain Hills, Arizona.

But make no mistake, this bike is intended for adventures, not just for a few hot laps on the racecourse.

Both irresistible force and immovable object, the Four Corners Elite rumbled without grumbles through sand, gravel, and rock piles, and when I occasionally bashed a pedal on something, the bike held doggedly to its line. The tall head tube and short stem help achieve a tour-friendly upright position with minimal spacers, while the new Four Corners–specific handlebar with its 20 degree flare in the drops permits a comfy cruising grip downstairs without canting the levers off at a screwy angle.

“When looking at other alternative bars on the market, we have seen controls end up in funky locations,” said Holmes. “With only the drops flaring, the controls are in a similar position that you’d find on a road bike.”

The 700c x 38mm Schwalbe G-One tires roll well on asphalt and provide plenty of grip in loose conditions, even on climbs, and I ran them at 50 psi, five pounds above the recommended minimum. Riders who plan to spend a lot of time off pavement can fit tires up to 29 x 2.1in.

I normally run 38mm tires at 40 psi or thereabouts, but even at the higher pressure the Columbus frameset didn’t beat me up on trails abraded by an unusually wet winter, perhaps thanks in part to a rear triangle whose svelte seat stays — not much thicker than the pens I use to draw cartoons — start 50mm down the seat tube from where you might expect to find them.

“It was done mainly for ride compliance,” said Holmes. “The thin tubing and frame design optimize comfort for the long haul.”

Indeed it does. And while an unloaded Four Corners Elite is a delight when going long, anyone who hauls gear will be pleased to see most of the usual attachment options for fully loaded touring.

Unwilling to turn a rock star into a lounge act, I went minimalist, strapping on three Revelate Designs bags — Sweetroll (handlebar), Tangle (frame), and Pika (seatpost). These let me carry everything I need for a spartan night in the wilderness. 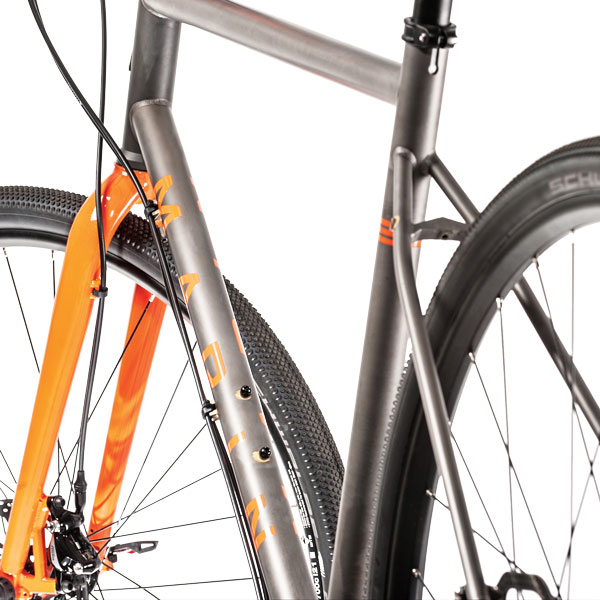 But kitchen-sink types will find eyelets and bosses for fenders, a rear rack, a low-rider front rack, a third bottle cage, and a few extra down-tube bosses that mystified me. Turns out they’re for routing cable housing for customers who’d prefer a front derailer and double or triple crankset to the stock 1x11 setup.

We adventure cyclists had some doubts about that, frankly, and so did pretty much everyone else who examined the Elite’s 1x drivetrain. But it yields a low gear of 40x42 (26 gear inches), which is just a half-inch taller than the low end served up by another fast and light steel bike with a compact double, the Elephant Bikes National Forest Explorer (see the February issue).

I appreciate the efficiency and simplicity of the single-ring setup; my townie is a single-ring, seven-speed, steel cyclocross bike. And with light loads on the 25-pound Elite, I never struggled on climbs using that 26-inch low end. I did find myself spinning at 100-plus rpm in the 109.3-inch top end on one long paved descent; ordinarily I’d have coasted, but it was a cold morning and I wanted to keep my legs warm for the next climb.

Simplicity is not a word I’d apply to the brakes: SRAM Rival hydraulics clamping 160mm rotors. This was my first experience with hydro brakes, and I see why people like them — big power, light touch, plenty of modulation — but I’m not a great mechanic, so I doubt my ability to solve any mechanical puzzles far from the friendly neighborhood bike shop. Sending me down the trail with hydraulic brakes would be like handing Don Felder’s Gibson EDS-1275 double-neck guitar to a ukulele player and requesting “Hotel California.”

That said, Marin is sold on hydraulic discs and specs them on a wide variety of machines, from the sub-$1,000 Pine Mountain 1 hardtail to kids’ bikes.

“Performance benefits far outweigh the potential for problems, proven by the adoption on virtually all levels of mountain bikes at this point,” said Holmes.

The Naild thru-axles at front and rear gave me a moment’s concern too. I was taking my inaugural ride on the Four Corners Elite when I realized I had no idea how to release a wheel if I punctured, which I do frequently thanks to Albuquerque’s ubiquitous goat-head thorns. So I turned around, rode home, and whaddaya know? Naild has a how-to video on its website. Takes all of 26 seconds to remove and replace a wheel so equipped. Fixing the flat takes a little longer, of course. But the Schwalbe tires and WTB rims are tubeless ready, and fans of that setup may suffer fewer flats than I do.

“We like the Naild thru-axle system, as they provide the rigidity and safety of thru-axles but with the quickness, ease, and convenience of a quick release,” said Holmes. Just be sure to watch that how-to video before rolling out, and if your bike occasionally travels by car, you may need to rethink your roof rack too.

From the top of the roof to the bottom line: the Four Corners Elite is a nimble all-terrain vehicle — plus a real eye-grabber with its battleship gray tubes accented with orange fork, stem, and decals — and my reservations about hydraulic brakes aside, I don’t believe I’d change a thing about it. If it ain’t broke, as the fella says.

And for anyone who doesn’t have the fiscal hardware or cranial software to accommodate a reboot of this magnitude, Marin still offers a close-to-classic Four Corners — a 4130 chromoly nine-speed with triple crankset, mechanical discs, and STI brake-shift levers for $1,099.

Patrick O’Grady has written and cartooned about cycling since 1989 for VeloNews, Bicycle Retailer & Industry News, and a variety of other publications. To read more from Patrick, visit maddogmedia.wordpress.com.

11. Color: Raw metal with matte clearcoat; orange fork, stem and decals are an homage to Marin’s origins in 1986, as is the “86” stamped into the seatstay bridge.