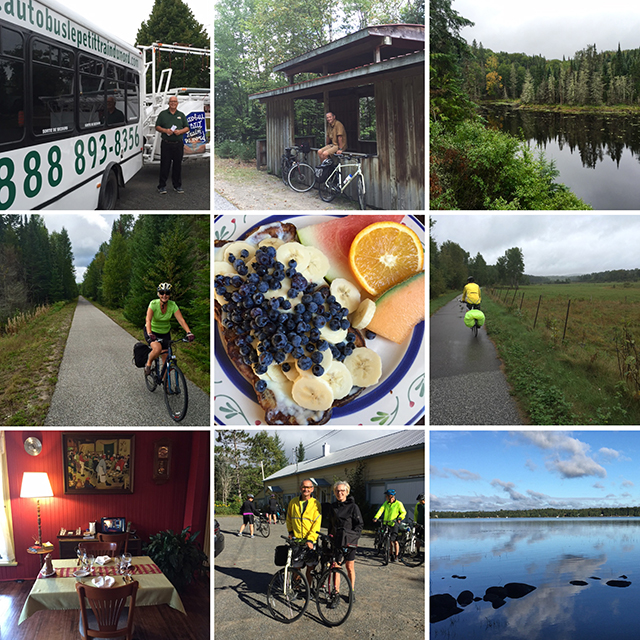 Story and Photos by Colleen Friesen

Just an hour north of Montreal sits a classic French-Canadian cycling experience, a perfect way to celebrate your northern neighbor’s 150th birthday in 2017.

Riding the 200-kilometer P’tit Train du Nord trail along a former rail bed with its easy-peasy two percent grade is a chance to tuck into old inns, dine on French food, drink lovely wines and craft beers, and tes your best bonjour on unsuspecting Quebecois.

Granted, there are some language issues. So let’s clear that up right away.

Herein lies the trick to the whole French thing in Canada — and Quebec in particular. Simply demonstrate your good intentions. They’ll hear your accented attempt, smile with genuine warmth that you tried, and immediately switch to English.

Now to the actual riding: the P’tit Train du Nord route starts at Mont Laurier and ends at St. Jerome, wending through one of the oldest mountain ranges in the world (the Laurentian Mountains continue across the U.S. border as New York's Adirondacks). Many of the rocks deposited in the range are more than 540 million years old.

But the real beauty of this trip lies within its ease of execution.

Autobus P’tit Train du Nord is a 20-year-old company in St. Jerome (St. Jerome is only an hour north of the international airport in Montreal). Over those two decades, Autobus has perfected the delivery of bodies and bikes, including a harmonica-riffing owner/operator/driver. The Autobus shuttle will take you, your luggage, and your bike (or will provide a rental bike known as a ‘location de velo’) to the start of the trail, 200 kilometres (124 miles) north in Mont Laurier.

Last September, my husband and I boarded the bus, listened to Michele’s harmonica tune, and were quickly blasted up to Mont Laurier. We were hoping to see the flaming autumnal colors, but we were a little early in the season. Instead, by the time we disembarked, the rain was serious. It was kind of like being in a car wash without, of course, those foaming rollers.

But everything else was the same — the deluge seemed to come at us from every direction. With every revolution of my pedals, the water slopped back and forth in my shoes. Occasionally we stopped in one of the caboose-like shelters and I wrung out my socks.

The bonus was the two percent grade of the former rail bed. On paper this sounds good. It probably would be even better if one hadn’t been sitting in a car on an extended road trip for the previous few months.

If one, let’s say this one, had actually trained a little, it probably wouldn’t have felt quite as arduous as it did. In my defense, I think that the gully-washing nature of the rain had a detrimental psychological effect.

Whatever it was, by the time we had pedaled 58 kilometers to Auberge Chez Ignace, I was spent. Kaput. Finished.

Happily there was a tub, and Autobus had delivered our luggage. There was fresh hot coffee for me and beer for Kevin. And (bonus !) we’d made new friends on the trail and they happened to be carrying ibuprofen. I’m not sure how I managed to forget my requisite bottle, but it was lovely that my new friend shared some of her stash.

My restorative tub soaking was followed by a three-course dinner (depending on the distance you want to travel, there are many inns and auberges to choose from. We relied on the suggestions from Autobus for our four-day/three-night journey).

Auberge Chez Ignace is owned by the Dunettes — Yolande and, of course, the auberge’s namesake, Ignace. Twenty years ago the couple, originally from Belgium, decided they wanted to have an adventure. So they bought an old station on a defunct rail line and emigrated to Canada. Little did they know that a month after their arrival, the old rail line would be converted to a bike route. They’ve spent the subsequent two decades raising three sons, building and creating a wonderful inn, and taking care of cyclists. With dinner choices that included elk, pike, or rabbit, it was hard to believe we were in a tiny little village.

Ignace also passionately collects taxidermy. He emphasizes that he’s not a hunter, nor does he solicit these animals. Instead he finds them online and through other collectors and has built an entire little museum he calls L’Arche perdue de Noah (Noah’s Lost Ark). There are hares, bears, owls, and birds, skeletons, furs, and even a huge glass-cased Victorian display of tiny songbirds — the overall effect is mesmerizing and well worth a visit. The museum, a short drive from the inn, is in the heart of the little village of Nominingue.

The next day was glorious, and, with plenty of ibuprofen on board, those 60 kilometers didn’t feel quite as tough. The 200-kilometer trail is wide and nearly 80 kilometers of it is paved. When it’s not paved, the crushed gravel is packed down to an easy-to-cycle surface. We cruised by sparkling lakes, little forests, tiny towns, and grassy meadows. We found little caboose-like shelters, regularly spaced outhouses, and wonderful converted train stations with bike repair stations, air, fresh water, and wonderful places to picnic or buy a lunch.

By the time we wheeled into Auberge La Voyageur in Mt. Tremblant, I was feeling pretty strong. Strong enough to stroll the couple kilometers required to do the roundtrip into the beautiful little village in order to tuck into a wonderful pasta dinner.

It was almost too easy to ride the next day’s 50 kilometers. The weather was sunny with some random clouds, and the gusting breezes at the end of the day brought a smattering of rain. But it was on account of that night’s thunder that felt like Auberge La Gare might just blow up. Luckily, the inn had stayed intact since 1891, so it managed to hang on through another night, long enough to ensure that we had yet another magnificent breakfast.

Except for the random gusts of strong wind, the final 32 kilometers into St. Jerome was almost anticlimatic in how easy it felt. It was like I’d finally trained enough to start the trip.

Colleen Friesen spends way too much time in airports. She travels as much as possible but hates to leave her home in British Columbia. She is also an award-winning member of the Travel Media Association of Canada. You can follow her at colleenfriesen.com.