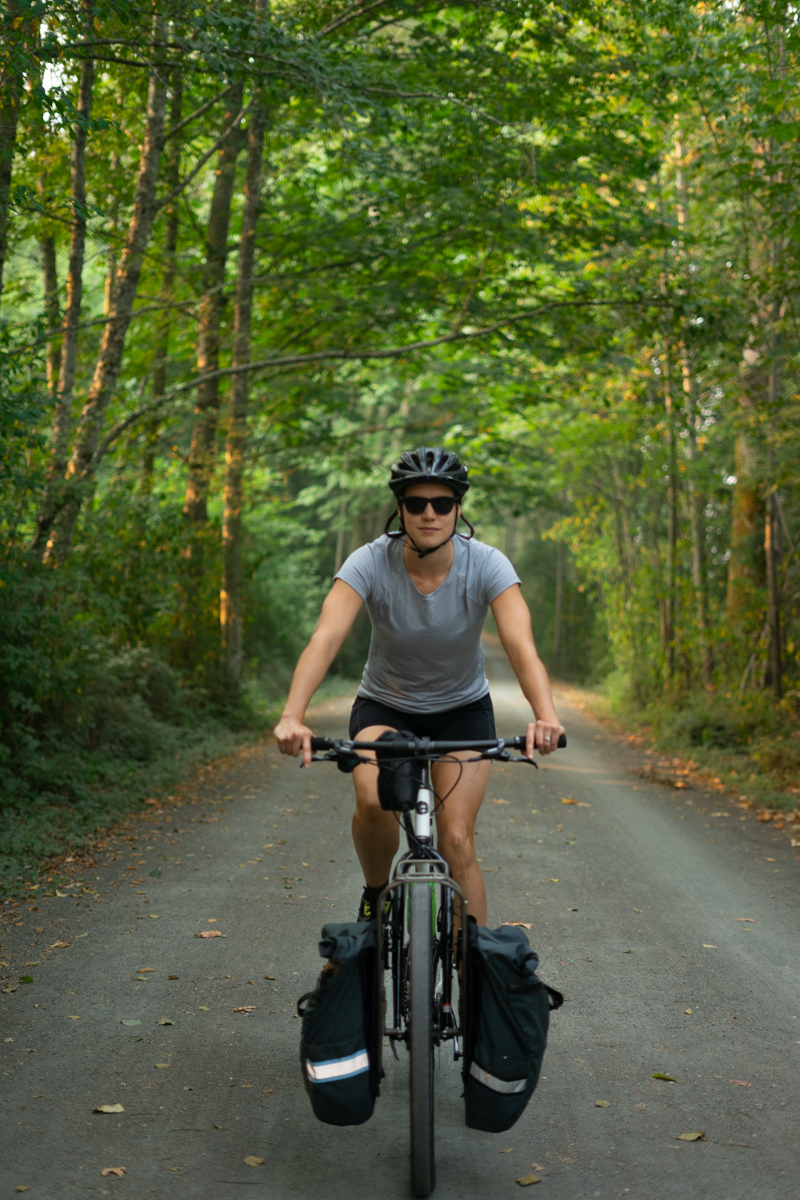 We’d begun to wonder whether we might, as a career, have local tourism bureaus pay Keriann and me to not come to their town. First it was New Zealand in February, when our arrival in the country for a hut trip coincided with the appearance of Cyclone Gita and a direct hit on the Old Ghost Road. Then, in August, a lightning-sparked firestorm in Glacier National Park joined a battery of blazes in British Columbia to smoke out Adventure Cycling’s Glacier Waterton inn-to-inn trip. The tour was canceled on a Wednesday and the time off was already on the calendar — could we scrape together a bike trip before the season ended?

After a quickly aborted look toward Reykjavík (last-minute flights to Iceland are unexpectedly cheap) we turned our eyes west to the coast. We’d ridden Adventure Cycling’s beautiful San Juan Islands tour back in 2015, and with family in Seattle we figured it was our best chance. A few Airbnb bookings and reshuffling of luggage later, we were en route to Anacortes, start of the Northern Tier Route and our jumping-off point.

For a couple of flyover country residents, the intersection of public transit and boats makes ferries extremely appealing, and during that San Juans trip a few years prior we’d relished the short hops between islands as a multimodal option you just can’t get in Montana. This time, though, we’d be shooting between the San Juans bound for Sidney, British Columbia, on Vancouver Island. I’d love to say the two-hour ride was beautiful and whales abounded in the Haro Strait, but the smoke we’d run from in Montana had settled over the greater Puget Sound region and visibility was sometimes no more than 100 yards.

Luckily the bicycling was considerably better than the air quality, and after disembarking we turned left and immediately joined the Lochside Trail, a 20-mile path running from just north of Sidney to Victoria. Well signed, well built, and etherial in the smoke-filled evening light, we spun car- and worry-free down to Victoria Harbor and directly into North America’s second-oldest Chinatown where an Airbnb awaited us.

I’d visited this proudly English city as a child and immediately recognized the profusion of flowers in hanging baskets and elaborate beds that characterize downtown and the iconic Fairmont Empress Hotel that lords over the main harbor. While the smoke dampened our desire to visit Butchart Gardens outside the city, the fresh fish, excellent coffee shops, and walkable downtown made a day and half here feel like far too little.

With the smoke refusing to lift, we hopped aboard the privately run ferry bound for Port Angeles, Washington, (cyclists don’t require reservations on Washington State or Black Ball ferries) for the 90-minute ride. The coast materialized only as we nearly docked, and thanks to a late departure — the 6:00 a.m. option was simply too early for this vacation — we wolfed down a grocery store lunch and again intercepted a fantastic trail that literally left from the ferry terminal.

The Olympic Discovery Trail (ODT) runs from Port Townsend on Puget Sound in the east across the top of the Olympic Peninsula to the town of La Push on the Pacific Coast. The 130-mile route utilizes paved and crushed-gravel paths, sections of highway, and even a dirt section for the ambitious with knobby tires. Port Angeles falls more or less in the center of the route, 54 miles from our destination for the night in Port Townsend.

The first few miles found us on a nearly flawless path along an old railbed running right up against the coast. “This is going to be easier than I thought,” I thought. First mistake.

The ODT is a rail trail along many stretches and features some truly impressive restored trestles that run for hundreds of feet at treetop level above deep valleys carved by the area’s famously abundant precipitation. But we quickly found that where trestles hadn’t been salvaged, the trail plunged into these fern-filled crevasses and then punched back out at grades that demanded good brakes and better quads. More than one hike-a-bike was required. 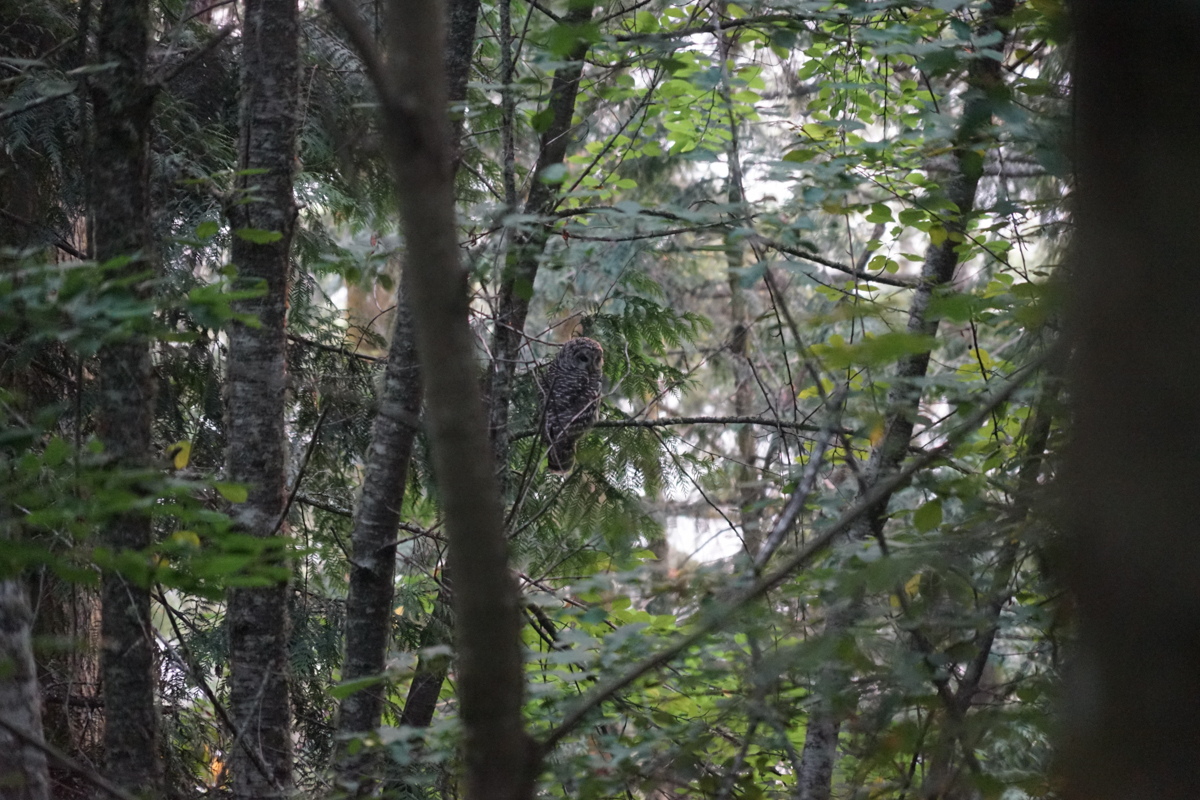 Still, the route was well marked, and I had a GPS loaded with the track in my proverbial pocket in case we got turned around. We met another couple touring the route in the opposite direction in the town of Sequim (pronounced “skwim”). The looks on their faces when we told them we planned to press on to Port Townsend seemed curious at the time. A few hours later, we realized it was prophetic.

The trail gave way to backroads to tiny Blyn and signage became scarce. From Blyn to Discovery Bay, some educated guesses and the GPS replaced signs altogether as we jumped from backroads to bits of highway to a short stretch of paved trail that inexplicably dead-ended behind a chainlink fence in a marsh. At a convenience store in Discovery Bay, a local who’d been involved with the trail’s development warned us that he didn’t ride the next stretch of route anymore for fear of traffic. The next dozen miles on Highway 20 took us up and over a steep pass with no shoulder, poor sight lines, and plenty of traffic. Not great riding by any measure, and even less so in the dimming light of a smoky late afternoon. We were rewarded at Four Corners, where we picked up the Larry Scott Memorial Trail for the final half-dozen miles into Port Townsend. This idyllic path winds through heavy woods before punching out along the shore of Puget Sound. A huge great grey owl soundlessly flew across the trail in one thickly treed stretch and perched just 20 yards away as we watched, balancing hunger with fascination. 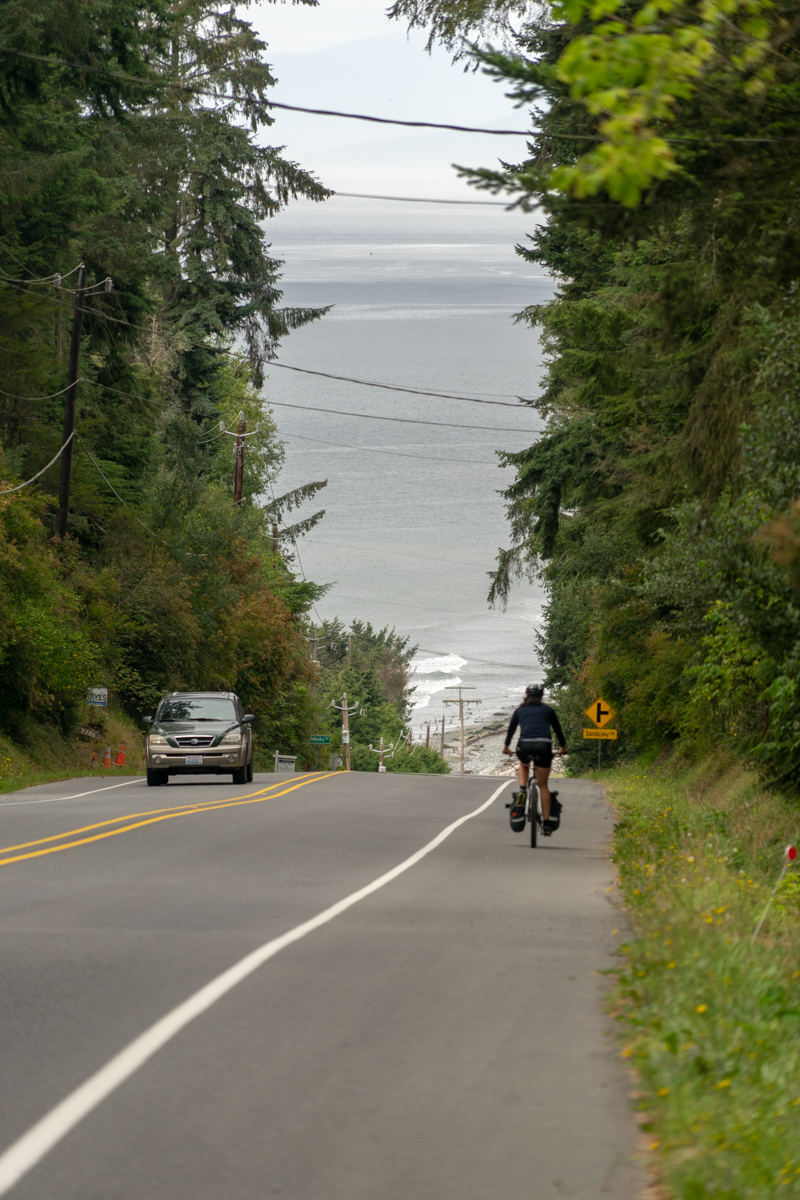 A strong tailwind pushed us the final miles into downtown Port Townsend, and with it an even thicker smokescreen arrived. After demolishing mountainous plates of fried rice and curry, we called it a night and hoped for clear skies.

Morning revealed more gray, but a drizzle was now mixed with smoke as we hopped aboard the Washington State Ferry for the short trip to Whidbey Island. From the Coupeville ferry terminal, we’d be riding (in reverse) a day’s itinerary we’d pedaled back in 2015. With fighter jets screaming overhead much of the day from the nearby Naval Air Station, we made our way up the low-traffic farm roads that wind along both sides of busy Highway 20. At Deception Pass there’s no way but the highway, and we took the lane across the narrow bridges over the torrent below that looks more like a whitewater rapid than an ocean thanks to the extreme currents created by tidal flows in this cramped passage. Then it was easy riding up the coast of Fidalgo Island back to our car at the Anacortes dock.

All told, only some 180 miles had been covered by boat and bike, and the wildfires raging in British Columbia and parts of Oregon and California had inundated the region with smoke, but for a last-minute scramble of a tour, this loop was hard to beat.

Still, next year I’ll expect a check in the mail to stay home.

Alex Strickland is the Editor-in-Chief of Adventure Cyclist magazine. Three days after he got home from this trip, he broke his collarbone in a mountain bike crash.

When to go: Tourist traffic — on roads and in reservations — is high between Memorial Day and Labor Day in much of the region (Canada’s tourism season starts a bit later thanks to school calendars there), so shoulder seasons are ideal. Late summer and early fall offer mild temperatures and the promise of at least some dry days. Smoke, however, is a risk.

Where to stay: We rented an AirBnB in Victoria and stayed at the Port Townsend Inn. Plenty of lodging exists in both spots, and it would be easy to extend the tour by riding on the San Juan Islands before jumping to Vancouver Island.

What to bring: I was testing a Trek 520 (see the Dec. 2018/Jan. 2019 issue of Adventure Cyclist for a full Road Test), but for a credit card tour like this, nearly any bike will do. A few punchy climbs reward those with a truly low gear, but the rolling terrain is easily navigated with a wide-range 1x drivetrain. Tires on the wider side will be appreciated for multiple surfaces along the route, and, while we avoided flats, the blackberry bushes that line almost every roadside in the region require vigilance to avoid the thorn-filled tendrils that often creep into road shoulders.

Where to eat: While lodging options are plentiful in all the logical overnights, food options can be scarce along chunks of the route, which is surprisingly rural. Whidbey Island in particular offers few services outside of Coupeville and Oak Harbor on the northern half of the island. Red Fish Blue Fish in Victoria offers a unique setting (al fresco, with food prepared in a recycled shipping container) and incredible grub. Port Townsend’s 123 Thai Food offers touring-cyclist–sized portions. In downtown Anacortes, Adrift is one of our favorite eateries on the planet.