When I undertook my first bike tour in 1989, I had no idea what I was getting into. Along with two others, I rode from Missoula, Montana, to Georgetown Lake between Anaconda and Phillipsburg. It was a bike overnight loop of 150 miles. We all rode bicycles but had never done anything like this ride before. Not only were we unprepared for the rigors of the ride, we were poorly equipped, essentially behaving as if we were on a backpacking trip. If you’ve ever ridden any significant distance on a bike with a full-sized backpack on, you know what a miserable experience it is.

Back then, you couldn’t just Google “bike touring equipment” and magically be presented with various options, it was all word of mouth — and Bikecentennial. My buddy Joe visited Bikecentennial to find out about proper gear and he learned more about the organization that would become Adventure Cycling. I was a college student at the time and managed to find an old set of Kirtland panniers at a local pawn shop to attach to my rear rack. It was as if I’d been given the keys to the kingdom and my touring experiences suddenly became much more enjoyable.

Of course, today you can simply open your Cyclosource catalog or go to the online store and you’ll be outfitted in no time. While Adventure Cycling stands by the products sold in Cyclosource, many more options exist. We’ll begin with those that have been in the game since the early days, plus a pair of relative newcomers. This is only Part One of the grand pannier roundup so hang in there. Parts Two and Three aren’t far off.  –Mike Deme 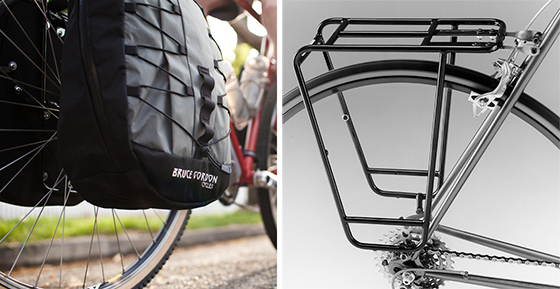 Bruce Gordon has been in the bicycle touring business in one way or another since 1976. At that time, he was building bicycles, included touring bikes, for Eisentraut Bicycles. In 1998, he established what is today Bruce Gordon Cycles and began producing Rock ’n Road touring bikes. It seemed like a natural evolution then to begin making touring racks and panniers. 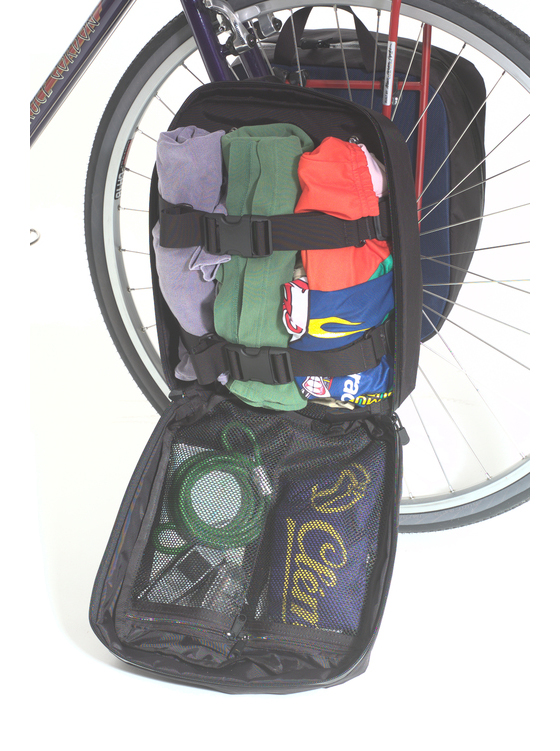 First things first: Bruce Gordon panniers are designed to be used with Bruce Gordon touring racks. Sure, if you’re determined (and I was), you can force them to “work” with standard racks, but their effectiveness is greatly reduced and you’d be defeating the purpose of integration. Gordon’s 4130 chrome-moly racks featuring machine-mitered joints come in 16 configurations and should be what you outfit your touring bike with if you’re going to use Gordon’s panniers. What you get from this combination is durability, stability, and peace of mind through simple, elegant design developed over many years of experience. It’s also worth noting that to get the most out of the Gordon system, you should be prepared to provide your frame measurements. Through this process, you’ll guarantee the best outcome for you and your bike tours.

Where the Gordon panniers shine is when they are used in conjunction with Gordon racks. The mounting system, consisting of three steel hooks at the top and two at the bottom, is rock solid. In addition, once the panniers are in place, an integrated strap system provides supplementary security as the panniers are essentially locked in place to the bottom corners of the rack. 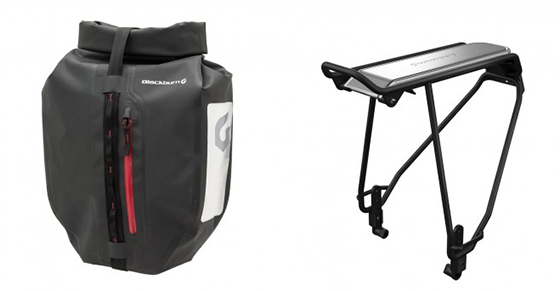 Jim Blackburn manufactured his first bicycle touring rack in 1975 and for many years Blackburn racks were the standard in the field. The company underwent many changes from those early days but has now returned to its touring roots and thrown itself into making quality gear for bicycle travelers, using its ranger program (blackburndesign.com/en_eu/outthere) for field testing its products.

The Barrier Rear (capacity: 20L) and Barrier Universal (capacity: 17L) panniers are Blackburn’s heavy-duty, waterproof, roll-top touring bags. Like most waterproof panniers, it’s essentially a seam-sealed dry bag with with a heavy-duty plastic rack-mounting system and some design elements in place for bike travelers. In the case of the Barrier, there are see-though windows on each side of the bag so you can see where your packed items are — very useful in a roll-top pannier (there’s also an integrated slot where you can stash a light for added visibility); compression and tie-down straps; a watertight zippered front pocket for items you need quick access to; and daisy chains on the front in case you want to hang or connect anything to the bag, say a wireless speaker or even a rolled-up grease rag.

The Barrier panniers are designed to work with Blackburn racks but are also compatible with most standard touring racks, including my 20-year-old Robert Beckman Designs rear rack.

Blackburn’s Barrier webpage features a couple of well-made videos so head on over there if you want to see the Barrier in action.  –MD 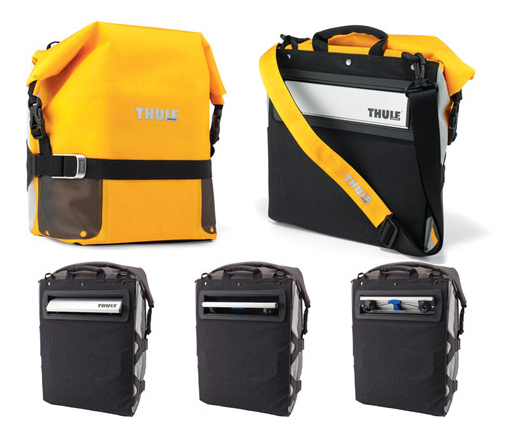 Though better known for their various style of car racks to carry skis, boats, and bikes, Sweedish brand Thule has been working to make a splash in the luggage world too, building backpacks, computer bags, and more. Throughout their offerings a sleek, minimalist aesthetic dominates and the Adventure Touring Panniers are no exception. In the few months I commuted with the large and small panniers on the back of my all-duty cyclocross bike I received comments from people in pretty much every walk of life about the slick-looking yellow bags (“sophisticated” was uttered more than once). And I must say, I’m pretty smitten with the look myself.

The Adventure Touring panniers are more than a pretty face, though that commitment to minimalism will give pocket lovers some heartburn. Inside there’s a single compartment (15.5L in the small version or 26L in the large) and a no-nonsense roll-top closure. The waterproof fabric proved resistant to scratches and scuffs, even in the high-vis yellow through some sloppy winter riding.

If the looks and the no-nonsense design don’t pique your interest, the cleverness of Thule’s attachment system might. A door-hidden-in-a-bookshelf-style panel on the pannier’s back flips over to reveal a pair of clasps that securely grab the top rack rail and down below a small but powerful magnet mounts to the rack and grasps a hidden panel sewn into the back of the pannier itself. The benefit here is that when detached, a shoulder strap can be popped on, the hidden-door panel flipped and a you have yourself a smooth-backed shoulder bag to take to the market or waterfall down the trail from camp.

As a fan of thoughtful design, I’m a impressed. In practice, some laziness caused a bolt to back out on one of the attachment points rendering the bag out of commission until repaired. I neglected to re-attach the magnet portion after doing some bike maintenance figuring the upper mounts were plenty strong enough for a light commuting load, but daily trips on the half mile of 100-year-old cobbles on my route to work rattled the bolt loose. Would it give me pause before taking the Adventure Touring panniers on a proper adventure? Probably not, but I’d dab a bit of Locktite on before heading out.  –Alex Strickland 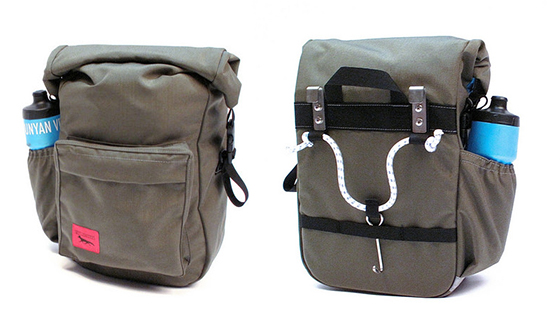 While the Thule bags illicit comments from the non-cycling public, it was the Junior Rangers were fawned over by the cycling-crazed staff at Adventure Cycling HQ. Swift’s vintage styling, made-in-USA construction and functionality combine for a package that’s just ... well, it’s just cool.

The “junior” in the Junior Ranger is to be taken seriously — these are not high-volume panniers — but if you’re looking for a small set of bags, the 10L (each) capacity Junior Rangers could fit the bill. Built from cordura fabric and lines with X-Pac for weather protection, the roll-top set has outside zippered pockets and water bottle pocket on the outside for convenient stash access, a feature that seems more rare all the time.

The company recommends using a dry bag to absolutely guarantee your gear stays dry, though thanks to a brutally hot and rain-free early summer in Western Montana I wasn’t able to put the water resistance of the panniers to a greater test than slicing through a poorly places lawn sprinkler. The cordura/X-Pac combo seems like it would be able to cope with most any shower, but sustained rain — like the type they receive in Swift’s native Seattle — would demand some extra protection.

The mounting system is extremely simple, traditional, and trouble free. A pair of top hooks slide over the rack and a bottom hook attached to a simple bungee cord holds the bottom of the bag to the bike and keeps things from rattling around. Despite my love for the occasional over-engineered idea, the dead-easy attachment was a welcome throwback and worked flawlessly.  –AS