NAHBS: Dispatch from a NAHBS Newbie 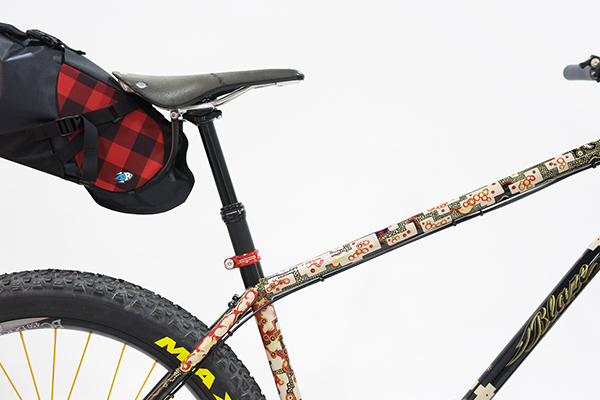 The paint is what gets you. No matter how many beautiful welds, curvy Ti top tubes, or bespoke, errr, spokes you’ve come across in your cycling life, you’ve never seen paint like this. The North American Handmade Bicycle Show (NAHBS) is many things, but most of all it’s extremely well painted (the Blaze bikepacking bike above was no exception). This year’s edition in Salt Lake City was my first, and although I’ve seen mountains of coverage from past years, I was still ill prepared for the level of craftsmanship I saw up close. Here then from a guy who gets paid to look at bikes all day, is a quick rundown of what caught my eye.

I’ve known this Boulder-based retailer as perhaps the most reputable eBay bike shop in the world, but their museum display at the show was an astonishingly well-curated look at the early days of modern mountain biking and bikepacking. Two of the highlights were a Salsa Scoboni from 1982 and a 1984 Moots Mountaineer (see a Road Test of the modern version here). Across the show floor, WH Bradford was showing off a Yeti Ultimate tribute bike that would’ve been just as at home with The Pro’s Closet collection. I didn’t know it existed before, but next time I’m on the Front Range this’ll be a mandatory stop.

Breadwinner’s rando-ready B-Road and bikepacking-capable Goodwater were both eye-catching rides for the traveling cyclist, regardless of surface. The Portland brand was among the higher-volume builders at the show, churning out a few hundred bikes per year. One advantage of that middle size is that instead of the sometimes months (or years) many custom customers have to wait, you can expect a Breadwinner in eight to 12 weeks. The B-Road on display was set up as an ideal light-touring bike with a rack, handlebar bag, and classy hammered fenders, along with mounts for rear and low-rider racks. The Goodwater features S&S couplers, a dropper post, and SRAM’s new 500% gear range Eagle 1x drivetrain riding on 27.5+ wheels and tires. 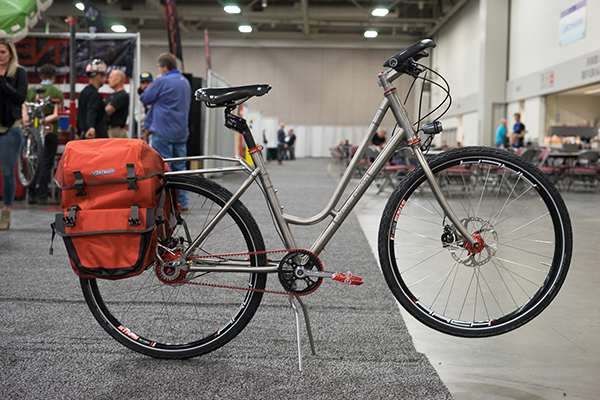 In the pantheon of beautifully shaped titanium bikes, Black Sheep might be atop the pile. Known for swooping tubes, truss forks, and eye-watering prices, the Colorado builder makes some of the most beautiful bikes on Earth. They showed off a step-through touring bike complete with contrasting red Rohloff (and matching Gates belt), dynamo front hub, and enough standover for a Smurf.

Although a handful of rides were equipped with racks and sacks, bikepacking bags were the luggage du jour for touring bikes at NAHBS 2017. And if the artfully crafted tubing presents a challenge for the builders themselves, it’s also a hurdle for the bagmakers. An Oddity Cycles bikepacking rig sported a pair of framebags from Porcelain Rocket — one above the tank tube and one below — and Vlad Cycles displayed a touring rig built specifically for, and wearing bags from, Andrew the Maker, whose method of attaching bags to the top tube using laced cord is as eye-catching as luggage can be. 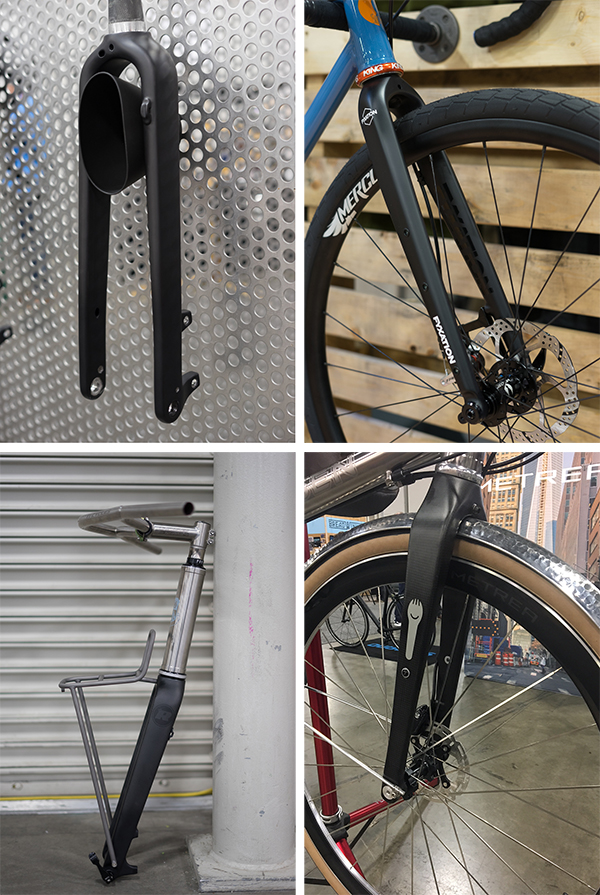 History may dictate that when you’re looking to load up the front of your bike, steel isn’t just real, it’s the only real option. But the floodgates appear to have opened on a generation of carbon forks sporting rack mounts that — in theory anyway — offer increased unloaded performance for a bike that doesn’t tour all the time, but can take racks and bags when pressed into service. The trend, it’s worth noting, seems to be initiated by Colorado mountain bike brand Niner’s carbon fork with low riders on their RLT9 model (Road Test February 2016), which the brand now offers as an aftermarket product.

This new fork brand from California distributor Cycle Monkey (Tout Terrain and Rohloff, among others) debuted at NAHBS with a trio of carbon forks for 700c, 29+, and fat bike tires. The 700c version sports stealth routing for dynamo wiring, thru-axle, and tapered carbon steerer tube. The pre-production model on display didn’t have rack mounts yet, but Cycle Monkey owner Neil Flock told Adventure Cyclist we could expect three points for mounting Anything Cage-style racks or low riders. Flock also said he was committed to keeping the fork free of integrated threads that could theoretically strip in the field. The disc posts, fender mounts, and proposed rack mounts all feature some sort of captive nut system for easy replacement.

Known for building bikes and parts for the fixie/urban crowd, Fyxation surprised with their Sparta All-Road carbon fork. Using a straight alloy steerer up top and a 12mm thru-axle at the bottom, the Sparta features three mounting holes designed for a Blackburn Outpost or Salsa Anything cage.

Tested to mountain bike standards (like the Co-Lab), the Rodeo Labs Spork carbon fork was spec’d on a beautiful Eriksen bike in Shimano’s booth, and I nearly missed it. Luckily, the grinning spork logo caught my eye, as did the low-rider rack mount just below it. Drilled for racks and fenders (including a molded crown-mount) and sporting a 15mm thru-axle and flat mounts for disc calipers, this thoroughly modern fork looks every bit race-ready but packs a number of features for light touring. 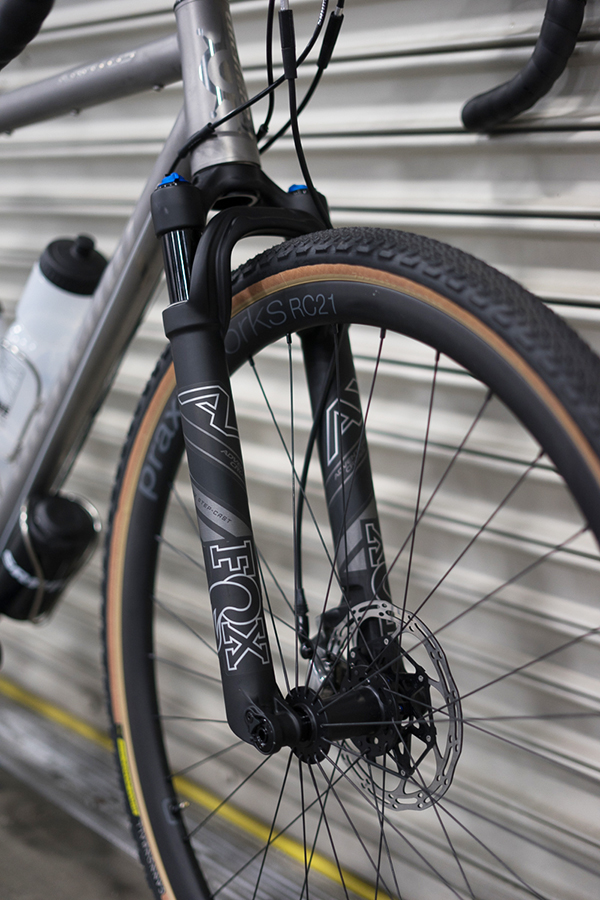 Details are scant, but rumors of a new suspension fork from Fox for the gravel and adventure crowd have been circulating for a few months. A very finished-looking prototype was seen on an Alchemy bike. And although we weren’t allowed to ride it (or even give it a little push), the super-short—travel modified version of a Fox 32 is certainly interesting. We’ll be watching it closely.

Alex Strickland is the Editor-in-Chief of Adventure Cyclist. This was his first time at NAHBS.