Well, this one is different. First, it’s got a belt and an internal geared hub. Second, as a sticker on the stem reminded me each time I threw a leg over the double “top” tube, it has four quick releases. Oh yeah, it folds. And it has 700c wheels. There’s nothing on the market quite like the Montague.

When I first met with the company at a tradeshow, I couldn’t quite figure out why they were making the bikes they did. What’s the point of a folder if it can’t skirt airline fees and/or slide under a desk? Why compromise a full-size bike? After a month on the Allston commuting daily, making grocery runs, and answering a lot of questions from curious colleagues and friends, I think I’ve discovered some answers.

Montague’s Ryan Walas acknowledged from the get-go that the Allston is an urban rig first, but it holds potential for serving double duty as a light touring/credit card–style bike. With an included clever rear rack (more on that in a minute), the Allston can carry a couple of bags, although because of a lack of fork mounts and a frame that would send shivers down a bikepacking bag maker’s spine, a couple is the limit. 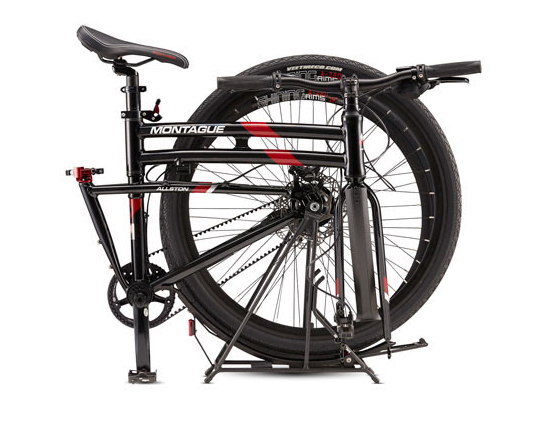 That’s not a bad thing, as Shimano’s Alfine 11 has a range of 400 percent, which would leave a fully loaded rider yearning for a lower option. The internal gearing and belt drive make for a killer commuter setup, and there is a unique satisfaction in not having to protect my pant leg from anything when I hop aboard in the morning. A belt/Alfine–equipped bike has been part of my family’s quiver for six or seven years now, and my experience with the 8-speed version of Shimano’s hub has been excellent. No maintenance, no fuss, and consistent shifts. The 11-speed version was notably sharper feeling than mine (likely having more to do with its newness), but I did have a consistent issue with the trigger shifter — which can dump more than one gear at a time à la Shimano’s higher-end mountain bike shifters — firing twice in the middle of the range with no reaction from the hub. Punch it once more and you’d drop three gears. That said, the muscle memory of a derailer-acclimated rider quickly evaporates in the pleasure of shifting through the range while coasting to a stoplight or with both feet on the ground. So convenient!

On the subject of Shimano, Montague spec’d hydraulic Deore disc brakes on the Allston, a powerful brakeset capable of slowing hard-charging mountain bikes. I’m a firm believer in the benefits of hydros for their power, modulation, and lack of need for adjustment as pads wear and was pleasantly surprised at the choice. My only complaint was the inclusion of three-finger levers, normally included on the brand’s Alfine-labeled brakes. Only one finger is needed, but because of the lever size, you’re essentially forced to use three just to move them out of the way.

The other potential stumbling block of hydraulic brakes on a folding bike seems fairly straightforward: if you pop a hose as you’re contorting the bike, you’re in a spot of trouble. But folding the Allston proved to be easy, and brake lines were spared any maneuvers that had me reaching for a bleed kit. As mentioned before, there are four quick releases on this bike — one for the front wheel, one for the seatpost, one monster on the center mast, and one for the “RackStand” rack, which releases to spin the rack around under the rear wheel, creating a type of stand. This is extremely handy when it comes time to fold the bike.

Popping the front wheel off is easy thanks to a CLIX quick release that doesn’t require unthreading the axle to clear fork tabs. You then loosen a nut on the front fender to drop it between the fork blades, undo the main quick release, and rotate the front of the bike around toward the back on the non-drive side. Velcro the bars to the rear wheel, try not to forget the front wheel(you’ll want that later), and Bob’s your uncle. It takes only a few seconds, and it halves the size of the bike. But what, exactly, does that get you?

Well, it won’t get you around an oversize baggage fee (probably, it’s definitely over the 62 linear inch limit if bagged or boxed), nor will it slip under a desk like a Brompton. But it will go in the trunk of a car or the corner of an apartment, which is more than a traditional 700c bike can claim. And unlike a Brompton or other small-wheeled folder, it looks fairly traditional and rides like a “normal” bike.

I’d admit that from moment one I expected the Allston to flex like crazy thanks to the lack of a downtube, assortment of quick releases, and point of rotation in the seat tube. That wasn’t the case, though. The bike was reasonably compliant for an aluminum frame with relatively narrow rubber (burly 38mm trekking tires from Vee Rubber), and it was plenty stiff to offer predictable handling. Shows what I know.

Though my relatively short test period didn’t uncover any creaks, with its proliferation of quick releases, rotating seat tube, and eccentric bottom bracket to tension the belt drive, the Allston is a recipe for annoying sounds as dust and dirt work their way in. The cheap stock platform pedals were also quite uncomfortable underfoot, but most riders would likely swap out their pedals of choice anyway. My only other complaint is the front fender, which was far from full coverage and prone to loosening on its own (a lock washer would’ve probably solved this).

So should you buy an Allston? Well ... maybe. It’s not a bad bike — quite the contrary, it proved a capable commuter that has a lot of potential for versatility — but it is a very specific one. The added weight (30 lbs.) and complexity required to shrink this 700c bike don’t add up for most riders who would be well served by a traditional bike with a similarly smart spec. That said, if you eschew bike racks on your vehicle, want to store a bike in tight quarters (boaters and RVers comes to mind), or simply don’t have room for a standard bike but want the ride characteristics of standard wheels, the Allston offers an intriguing option.

Alex Strickland is the Editor-in-Chief of Adventure Cyclist magazine.