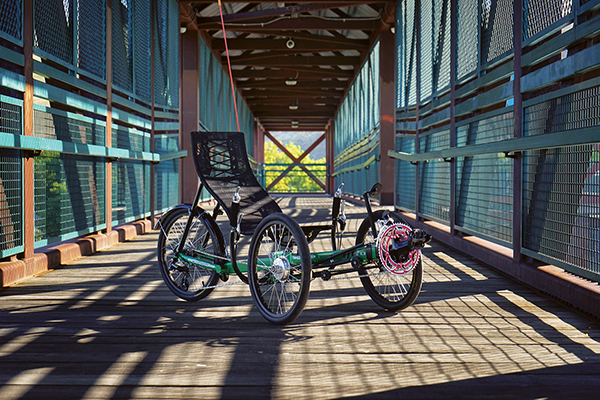 Embarrassingly, this was my first thought after plopping down in the seat of Greenspeed’s new folding GT20 recumbent tadpole trike. It was the first time I’d ever settled into such a machine, and its low-slung position and airplane-like hand controls had my mind racing to, well, racing. Which is exactly what I did — until I very nearly capsized in a too-zealous turn and decided that crashing Greenspeed’s prototype would be frowned upon by the friendly Australian recumbent makers.

I’ve been riding bikes with some level of sincerity for almost 20 years, but until this summer I had never piloted a recumbent of any type. In fact, until joining Adventure Cyclist a few years ago, I’m not sure I’d ever even seen more than a handful of recumbents. But the laid-back lobby isn’t always so, and on more than one occasion I’ve received an earful from a recumbent rider concerned that we weren’t giving the ‘bent its due.

So after Greenspeed exhibited at Adventure Cycling Association’s Montana Bicycle Celebration this summer and offered to leave a prototype model with me for a few weeks, I couldn’t say no. The GT20, a folding, 20-inch–wheel trike modeled after their popular Magnum series, sports a square-tubed mast to resist twisting, a 3x8 drivetrain, drum brakes, Greenspeed’s lauded seat, and enough quick releases to make my head spin.

Fast forward for a moment to prepping the GT20 for its next destination — I recovered the shipping box Greenspeed had left, set it next to the bike, and uttered a long tirade. How, I profanely wondered, was this medium-sized bike going to fit into this decidedly small-sized box? Those quick releases were the answer, and after a bit of figuring (and the removal of both front wheels), the trike was packed up and ready for shipping. It was perhaps the most impressive full-size folding mechanism I’ve seen.

But those quick releases come at a cost, and that’s rigidity. The sextet of quick releases used to adjust the cockpit controls (two for the seat angle, two for the mast, and one on each side for the steering arms) were prone to slippage if I got overzealous at the controls or on the power. Some of this was certainly user error, and as I settled into riding the GT20 over the first week, the slip frequency dropped sharply as I began to use more subtle inputs and resisted some knee-jerk movements that had caused issues early on.

In fact, subtle inputs proved to be the key to getting the most from the Greenspeed. A light touch on the steering arms, a gentle feather of the inside turning wheel’s brake (the right and left brakes are operated independently), and a downshift-and-spin cadence instead of trying to mash big gears combined to make the experience downright dignified. It was a big upgrade from my first few days on the trike, where I no doubt looked like a lunatic as I wiggled my way down the road, locked up the brakes, and was forced to stop and re-adjust after pushing too hard against some part of the trike and causing a bar to slip.

If I sound generally underwhelmed, that’s not quite right. Somehow the sum of these rather unusual (to me) parts added up to something that was undeniably fun. And it wasn’t just me. I’d estimate that half of Adventure Cycling staff took the Greenspeed for a spin on the surface streets around our offices, and they all seemed to return a bit bewildered but grinning. The little trike is infectious, and for those of us used to sitting atop a diamond frame, there’s a certain something about the low-slung position and different steering inputs that’s instantly a blast.

As for the nuts and bolts of the thing, the highlight of the component spec was the Shimano Ultegra bar-end shifters, which managed the 8-speed Alivio rear derailer and Microshift triple front with the perfect action and feel you’d expect from Ultegra-level components. In fact, I’d say shifting the front derailer on the Greenspeed — on full display right in front of you while riding — was perhaps the best front shifting experience I’ve ever had. Left and right Sturmy Archer drum brakes were fine, though I still think I’d prefer mid-level mechanical discs for better modulation. Of course that would have an effect on how the front wheels popped off and stowed, so the drums make sense on this particular model. Greenspeed’s own 20 x 1.5in. slicks were fine rubber for tarmac, but a few short excursions onto gravel quickly set the tires into “drift mode.” Fun, yes, but probably a bit outside the performance envelope the company’s engineers recommend.

It wasn’t so much the tires themselves but the diameter of the wheels they wrapped that I found was perhaps the most singular feature of the so-named GT20. Twenty inches proved very susceptible to the expansion gaps, potholes, and pock-marked cobbles that characterize my favorite Missoula test loop, delivering a jolt when the small hoops were sucked into various obstacles. Some of this was rider error, to be sure, as I found I had a penchant for splitting potholes right between the front wheels and getting shocked out of my self-congratulatory smugness by the rear wheel catching the impediment with perfect accuracy.

This mini road test feels all over the place, which closely mirrors my thoughts on the little Australian trike. Riding the GT20 in town behind angle-parked cars and up to intersections with poor sightlines was among the most vulnerable I’ve ever felt on two (or three) wheels. But spinning along a bike path or an open road was a blast, and a comfortable one at that. I ride a lot of eye-catching bikes, but none has ever received more comments than the Greenspeed, which, depending on your point of view, could be a pro or a con. The GT20 packs small, delivers some grins and some small frustrations, and if you’re feeling frisky is more than happy to go through a corner in a manner that’s reminiscent of a kid putting a go-kart through its paces. In short, I came to feel the way about the Greenspeed that I feel about the eBikes I’ve ridden over the years: not for everyone, but surprisingly fun and a great fit for the right rider.