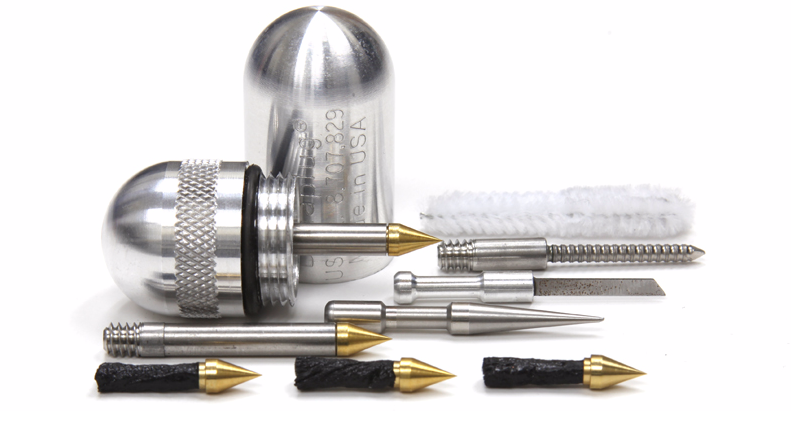 If you run tubeless tires, punctures are hopefully a rare occurrence. But latex sealant can only fix small punctures. For larger holes, a plug kit can keep you rolling on your next trip. Dynaplug makes kits for all sorts of tubeless applications including motorcycles and ATVs. The company’s Micro Pro comes with everything you’ll need to fix two punctures in a nice aluminum case. That it’s made in the U.S. doesn’t hurt either.

While riding the rocky terrain of Sedona, Arizona, the Dynaplug was called into duty. Included is a sharp, pointed air stopper to insert into the puncture hole and prevent unnecessary air loss. Then you prepare a plug in the insertion tool. Pulling the air stopper out and quickly inserting the plug is easy. Then you rotate your wheel so the plug is at the bottom, allowing the liquid sealant to fill in the gaps around the plug. Once sealed, a tiny knife is included to help trim the tail of the plug. The entire process is very clever, and the hard goods are exceptionally well conceived and executed. –NL 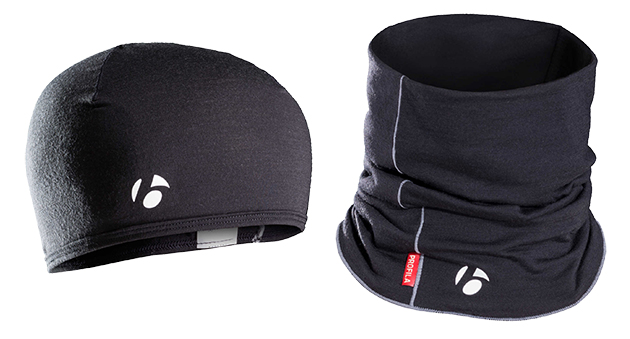 Thermoregulation is one of winter’s biggest challenges, but a few key articles of clothing can make a big difference. Once you have the right mix of insulation and windproof/waterproof layers for below the neck, look to headwear. This is an area where I’ve struggled in the past: I tend to overheat during rigorous winter rides, but as soon as I find a hat that is thin enough, I freeze on descents. It’s a difficult balance.

Bontrager has been hitting it out of the park lately with its apparel line, and the B2 Merino wool Beanie and Neck Warmer are both winners. The Beanie has quickly become a regular in my winter wear lineup. It’s thin enough to easily fit under a helmet and still keep me warm without overheating. It doesn’t have a windproof layer so it can be a little chilly on downhills, but for temperatures down to 35 degrees Fahrenheit it keeps me cozy.

The Neck Warmer is a bit thicker and, like a Buff, can be worn around the neck or pulled up over you mouth and nose. On days in the 40s I’ll keep it in my pocket and put it on as the day cools or for descents. When it’s colder, it’s on from the time I leave the front door. It’s a new favorite. –NL 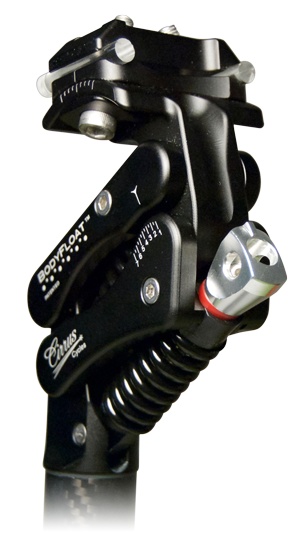 The BodyFloat from Cirrus Cycles is a suspension seatpost that provides additional comfort and increases pedaling efficiency in rough terrain. It is available with an aluminum or carbon fiber shaft, four different color-coded sets of springs, and a clamp that allows for either 7mm or 9mm saddle rails. The aluminum version is $249, and the carbon model goes for $395.

I used the BodyFloat at a couple of cyclocross races, during a number of mountain bike excursions, and on a 170-mile mixed-surface bike tour. In terrain with a lot of small, high-frequency bumps, such as on a ’cross course or a gravel road, the BodyFloat allowed me to pedal through sections where I would otherwise have had to stand up to absorb the hits. While touring the seatpost drastically increased my comfort level — my new Brooks saddle felt like a pillow made of kittens. In short, it worked as promised.

The BodyFloat has downsides, though. One, it’s expensive. Two, it’s heavy: the aluminum model I tested weighed in at 535g, which is well over twice the weight of my usual Thomson Elite post. The carbon model should be less porky, but not much. And three, it has a 24–28mm setback, which could be an issue if you usually run a zero-setback post.

If you ride on gravel roads and you want to go faster — or you have comfort issues — and you don’t mind a little extra weight, the BodyFloat is for you. Assuming you can afford it. –DM 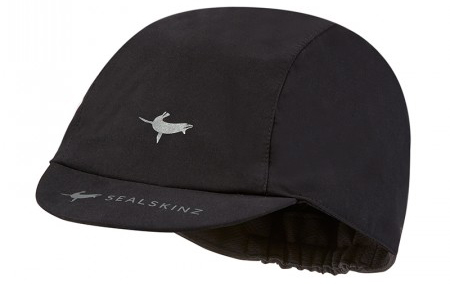 The Sealskinz Waterproof Cycling Cap is, well, exactly how it sounds. It’s windproof, waterproof, breathable, and not to mention stylish — it comes in black with tasteful, minimal graphics, and the brim is nicely firm. Two sizes are available, small/medium and large/extra large, and it’ll run you $40.

I’d never been much of a cycling cap enthusiast, but on a bike tour through the Bitterroot Mountains last October, I brought the Sealsinz waterproof cap as my primary headwear. Nothing like a bad-weather bike tour to test new gear.

The Sealskinz cap kept my head warm and dry in driving rain, even when the temperature dropped below 40 degrees. The cap fit easily under my helmet, was all-day comfortable, and breathed well. A mesh lining helps to wick perspiration.

The one time the Sealskinz cap came up short was when I rode straight into a surprise blizzard at the top of a mountain pass, but you can’t really fault the cap — it’s not intended as winter gear. And after three days and 170 miles, it smelled pretty funky, as one should expect. Luckily it’s machine washable and dries quickly.

This Sealskinz hat changed my mind about cycling caps. It's coming with me on every cool, wet ride from now on. –DM 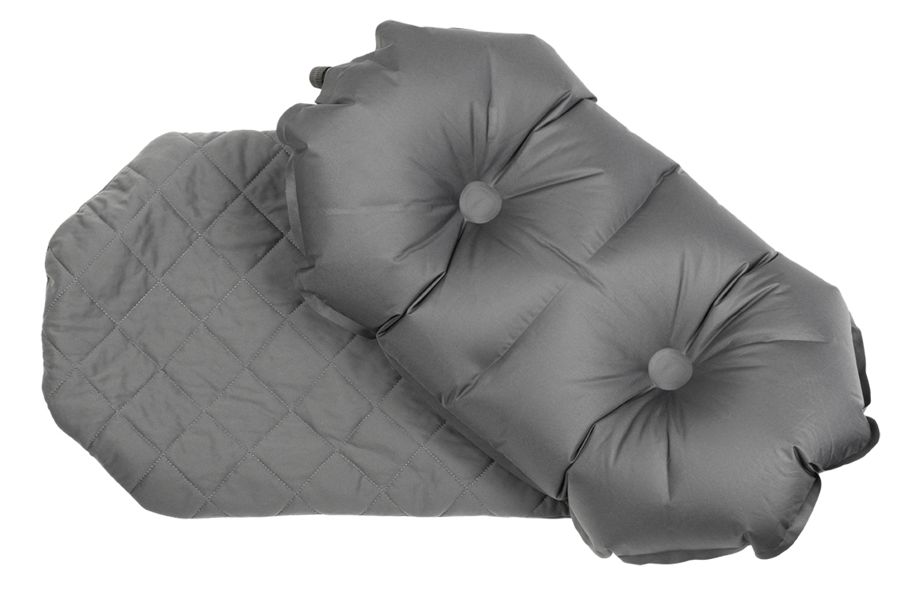 Luxury is a concept I despise and one that I think has become an albatross to humanity. And the word luxurious is overused almost as much as epic. But the Luxe pillow from Klymit is no luxury item. Sleep is one of the most basic and necessary human needs. Without it we become disoriented and show poor judgement, which can result in bad decision making, leaving you stranded in a precarious , maybe even life threatening situation. Scared yet? Well, you won't have to be if you decide to pack along Klymit's Luxe Pillow because you'll sleep like a spent puppy.

Constructed of 75D polyester, the 22 x 12.5-inch Luxe pillow weighs in at 6.2 ounces. It inflates with about five full breaths and cradles your noggin nearly as well as your pillow at home, maybe even better! Believe me, you won't regret packing the Luxe along and, if you're traveling with a partner, they'll not only be jealous, they'll likely be frustrated by the amount of time they spend pestering you to get up and get moving. –MD 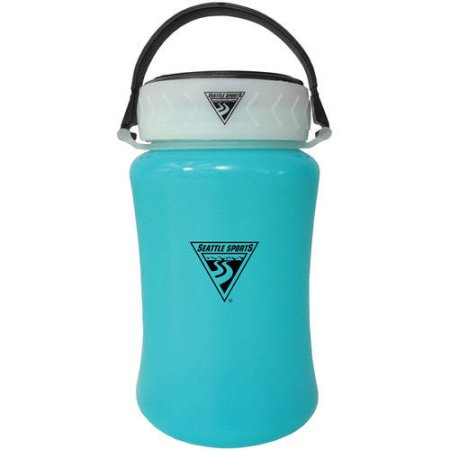 The FireWater by Seattle Sports is a 700ml, multi-purpose bottle that features a 100-lumen LED-equipped lid that can be used as a flashlight and also to illuminate the bottle's food-grade silicone body turning it into a lantern. The light has three settings: high, low, and strobe and will run for five hours on high and 12 hours on low. The light can be charged via micro USB by lowering the lid's protective rubber ring opposite the power button or via solar power. Charging takes five hours via USB and eight hours in direct sunlight.

Of course the FireWater can be used to dump H20 down your gob and perform as a waterproof container for items you'd like to protect from the nastiest of nature's elements. And, when you're not using the Firewater to drink, store, or illuminate anything, you can collapse the bottle by removing the lid, rolling it up, and clipping the handle closed around the body. The ability to unclip one side of the handle also allows you to hang the Firewater on your gear line inside or outside your tent.

The FireWater's dimensions are 6.57 x 3.93 inches, and it weighs 7.2 ounces when empty. All in all, it's a pretty handy device and makes a great addition to your bike travel kit. –MD

The Toolcard by Lever Gear is a credit-card–sized multitool that features 40 tools and can perform hundreds of functions. Yup, you read that right. I'm not going to list them all but, from a bike traveler's perspective, some of the most important are .25-inch hex bit holder, 5-13mm and 5/16-1/2-inch wrenches (plus an open-ended wrench), Phillips and flathead screwdrivers, a cord cutter, a pry bar, and both a bottle and can opener.

When its clip is engaged, the Toolcard acts as a money clip. When you remove the clip, it slides easily into your wallet. (But why use a wallet when you've got the Toolcard? That would be silly.) The Toolcard is made in America from 420 stainless steel, is TSA compliant, weighs a mere one ounce, and is available in silver or black. For me, carrying the Toolcard is a no brainer. If you don't feel the same way, check out their website. There are a couple of videos that may change your mind. –MD