Geared Up: The Gizmo Edition 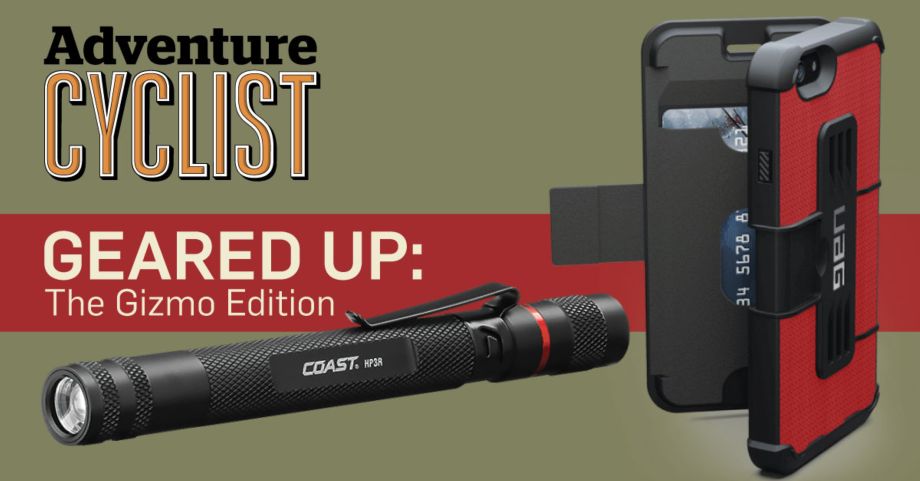 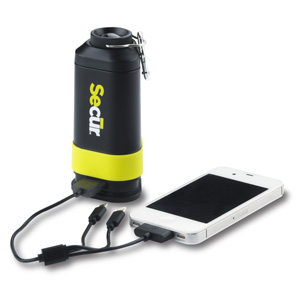 When preparing a packing list for a tour or bikepacking trip, today’s hybrid products are worth a look. If you want to save space and reduce the aggravation of searching for separate items, the Secur SP-1100 4-in-1 Light & Power Bank is one you’ll want to consider.

The combo unit offers a 150 LED flashlight that converts to a lantern when you pull the unit open from the top, a flashing red emergency light, and a 6,000mAh power bank that offers 2000mA DC out and can charge a mobile device 3 times.

Other features include a power/battery-capacity check button, charging indicator, micro USB DC input for charging the unit, standard USB type A DC output port for charging electronics, carabiner and hangar at the top (for lantern feature), and a base magnet for securing to metal objects. The SP-1100 comes with a micro USB cable, has dimensions of 4.375 x 2.125 in., weighs 8.6 oz, and is water resistant.

The power bank holds a full charge for months, at least 3 so far, which is impressive. The flashlight, lantern, and emergency light features all perform quite well, and the unit stores power to keep the flashlight and lantern burning for 17 hours and the emergency light for 34. And when you’re not on two wheels, the SP-1100 is a great item to keep in your car’s glove box. 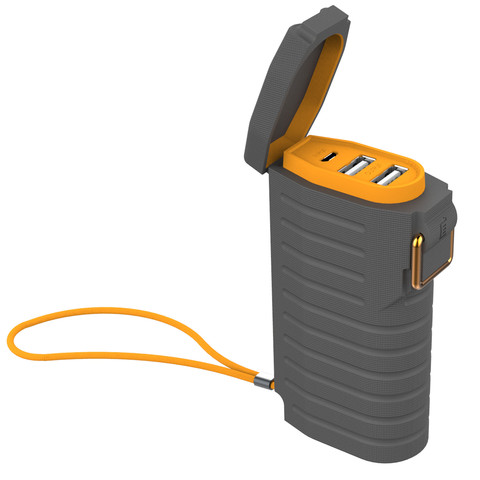 If you’re looking for a single-purpose power bank that can take a beating, be dropped in a lake, and still provide your mobile device with 3 full charges, look no further than the myCharge All Terrain+. According to myCharge’s website, the All Terrain+ (and its smaller sibling the All Terrain) is waterproof, temperature proof, dirt proof, and shock proof. I’ve buried it, left it in 100° F direct sunlight for hours, and kicked it about 40 yards on pavement then ran it over with my Dodge Durango, submerged it in water for hours, but it kept working. With an International Protection Rating (IP) of 68, it’s rugged indeed.

The All Terrain+ is charged through micro USB (cable included), features a four-light charge indicator, and charges (itself and devices) slightly faster than most other power banks I’ve tested. It charged an iPhone 6 from 16 to 90% in 70 minutes, and it still had 3/4 of its power remaining. It maintains a full charge for 1 year (my unit has so far held a full charge for over 5 months), features two 2.4-amp USB ports, and pass-through charging (can be charged and charge at the same time). And at 4 x 2.2 x 1.1 in. and 6.7 oz., you’ll barely notice it in your pack.

Note: The All Terrain is no longer available, but the AdventureMax is similarly featured.

Nomad offers a couple of units that can be used to charge your devices while on a bike trip, at home, or in your car.

The NomadPlus is an interesting AC wall charger because it’s also a DC charger. The unit accommodates an Apple wall plug and allows you to charge just about any handheld device. While it’s charging your device, it’s also charging its own backup 1800mAh battery. When it’s time to hit the road, you remove the wall plug (if you want to) and take the NomadPlus with you. If you need power while you’re out on an overnighter or two, the NomadPlus will give your handheld about a 65-70% charge, enough for regular use and certainly enough for any emergency purposes. Pretty slick. The Plus weighs 2.8 oz with dimensions of 2.15 x 2.15 in. 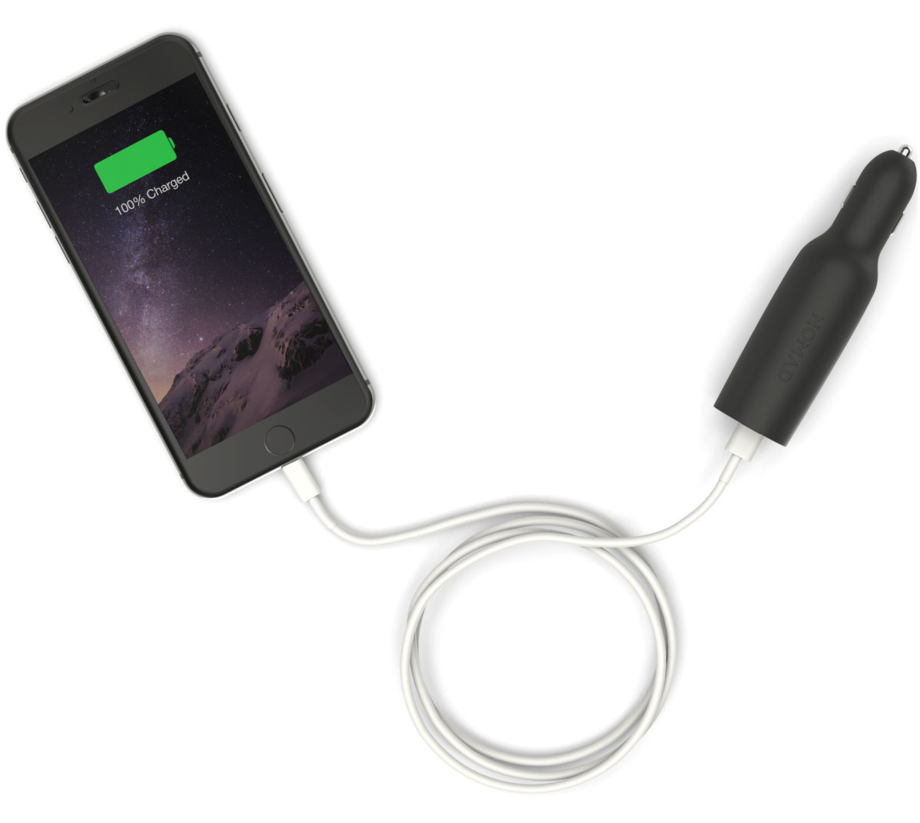 The Nomad Roadtrip is similar in concept except it’s a car charger. While it’s plugged into your automobile’s 12V receptacle, like the NomadPlus, it’s also charging its 3000mAh backup battery, although only once your handheld is charged. And the Roadtrip is up with the times featuring a USB type C outlet in addition to the standard USB type A port, both offering an output of 1.5 amps. It provides enough juice for about 1.25 charges. The Roadtrip weighs 7.7 oz. with dimensions of 4.75 x 1.25 in.

Caveat: Many backup battery solutions claim they’ll charge an iPad, but iPads (and, I assume, other tablets that I don’t own) are much more power hungry than iPhones and Android “phones” and you should look for something with at least 12,000mAh for proper charging.

Sure, it’s great to be able to power your favorite devices up, but you also need to protect them from the elements, and, cough, from you! The UAG Folio case provides just that. Your device fits snugly inside while the left side of the Folio provides a place to securely stash up to 3 credit cards, licenses, or whatever cards you carry.

The Folio protects your device with a rubberized surround hard shell and rear skid pads in addition to the water-resistant FrogSkin grip fabric and a soft impact-resistant core. The enclosure is magnetic, and the screen, ports, lenses, and buttons are all available so you don’t need to remove your device from the Folio to use all of its functions.

To some degree, you’re going to have to trust UAG’s claims about how protective the Folio is because, although I threw it around a bit, I’m not going to drop my device from any great height to test the case’s efficacy. Sorry ‘bout that. But it is a nice case, it feels good, and it only adds about .125 in. to the length and width and .25 in. to the devices depth. Plus, it looks pretty good, especially the Magma (red) model, and the Folio is available for iPhone 6/Plus and many Android devices. 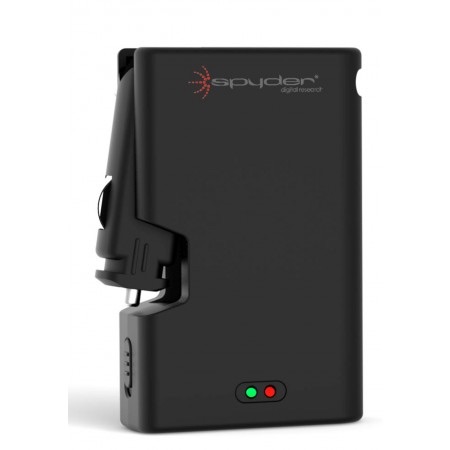 Talk about a jack-of-all-trades, the Spyder Commuter is the Swiss Army Knife of device chargers. It features a foldable AC wall plug, a switchblade-like plug for your car’s 12V receptacle, a standard type A USB port, and a 2600mAh lithium-ion polymer backup battery that offers 1 amp of output and provided a 70-75% charge to the iPhone 5 I tested it on. 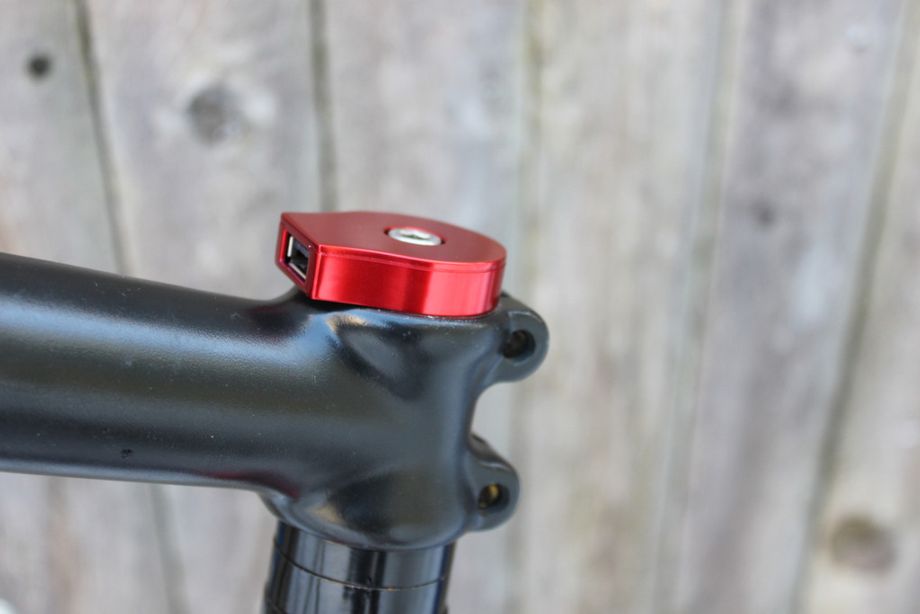 Taking device charging a step further, what if you used the power you generate by pedaling your bike into power for your gizmos? Seems reasonable. First thing you’ll need is a dynamo hub (check out: cyclingabout.com/dynamo-hub-recommendations-for-bicycle-touring). Once you can generate power by pedaling, you’ll need another gizmo, this one to convert your dynamo’s power into usable output, and that’s where the SineWave Reactor comes in.

Compatible with 1 in. and 1 1/8 in. threadless headsets and available in silver, black, and red, the Reactor sits atop your steertube acting as a stem cap, and that’s all you see of the unit. Once it’s installed, you simply plug a USB cable into it, pedal away, and you’re powering all your devices as you travel down the long, lonesome road.

Installation of a unit like the Reactor is something some people can do in their sleep while others may struggle. If you’re the latter type of person, head over to you local bike shop for installation. If you’re the former and you want to install the Reactor yourself, check out Ryan King’s excellent step-by-step, picture-filled guide.

Once you’re generating your own power from the saddle by doing what you’re already doing, you’ll wonder why you hadn’t installed the Reactor sooner. If you don’t want to mess with your headset, check out the Reactor’s cousin, the SineWave Revolution. 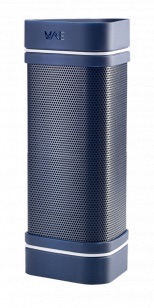 Music. It makes most people really happy. So happy that, whenever possible, they want to be listening to their favorite tunes, even when — gasp! — riding a bicycle, tricycle, or quadricycle. Yes, I know some people don’t think there’s any place for music when riding, and I agree people shouldn’t use earbuds when cycling, but as long as ambient sounds are still audible, I say to each their own. That’s where the WAE Outdoor Speaker comes in. It comes with 2 mounts so you can attach it to various points on your bike frame, wherever it suits you best.

The WAE is wireless, using Bluetooth 3.0 A2DP technology. It’s shock resistant, offers very good sound with a frequency response of 130-20,000 Hz and peak power of 10 watts through 2 active drivers, is magnetically shielded, and will produce music for about 12 hours at medium volume. It weighs 13.8 oz. with mount and its triangular dimensions are 6 x 2.75 in.

Whether you listen to music while riding or wait until you get to camp or your hotel room, the WAE unit is worth carrying. It comes with a micro USB cable and wrist band, and it’ll act as a speaker for your mobile phone if you make a lot of check-in calls while your touring or bikepacking. It will also stay connected to 2 devices at once, although you can only listen to one at a time. 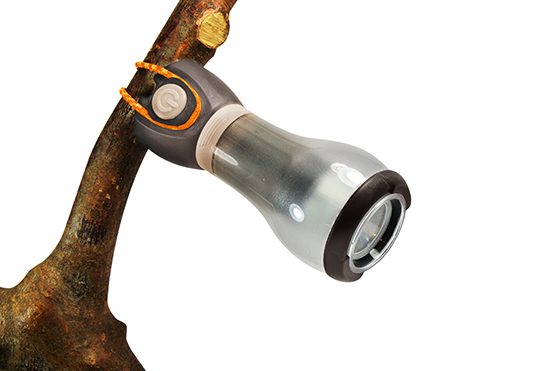 Sometimes you just need a little light, am I right? You roll into camp at the end of a longer-than-expected day in the saddle and you’re starving. Well, not really, but you’re very hungry and eating is the first thing on your mind. On the other hand, you also need to set up your tent while the waning light lasts. And you absolutely need to inspect your map because you need to know where you missed your turn, resulting in your late-to-camp arrival in the first place. Seem familiar? Well, avoid this flabbergasting situation on your next bike adventure by packing the Alki Lantern + Flashlight along.

The Alki is a collapsible light that functions as a flashlight and lantern. When you need a beam, it’ll provide that for you. When you need diffuse light provided by a lantern, pull it open and you’re golden. The Alki is powered by an R3 XP-E Cree LED and offers 4 settings: low, medium, high, and strobe (5, 65, 150, and 65 lumens respectively) with the high setting providing a beam that reaches over 400 feet with a runtime of about 5 hours. When you click it on, it’s in low mode and you cycle through by lightly pressing the on/off switch. And it only weighs 4.5 oz. including with the 3 AAA batteries installed. When in flashlight mode, the Alki is 4.5 in. long and 6.5 when in lantern mode.

The Alki is water resistant and includes an integrated shock cord for mounting to various branches, posts, and straps. For my money, the Alki could be the best value I’ve come across for $20. 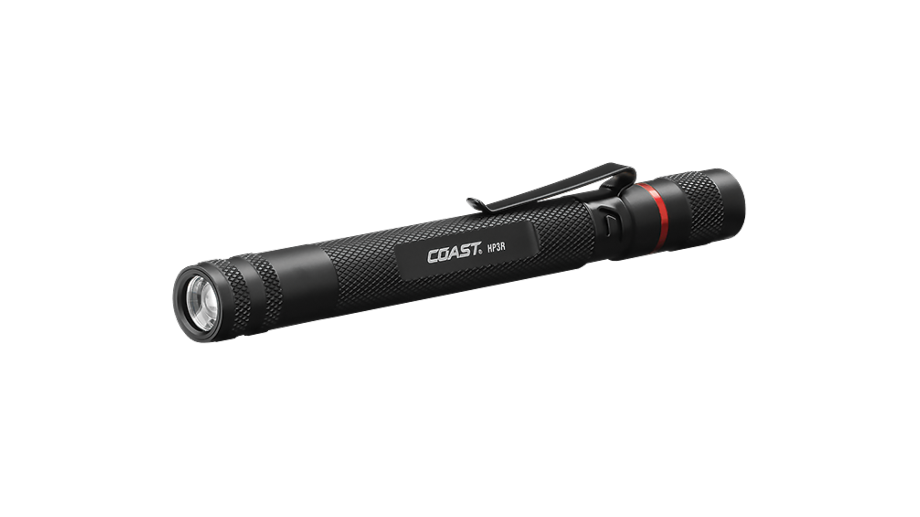 Looking for a flashlight that’s shaped like a Slim Jim? The Coast HP3R might fit the bill. At nearly 6 x .6 in. and weighing only 1.8 oz., this supersized-penlight will slip into just about any pocket in your pannier, frame bag, or handlebar bag. And let’s not forget your shirt pocket too!

The HP3R’s 245-lumen casts both a spot (300 ft.) and flood (8 ft. wide) beam by twisting the bulb end and provides a low and high setting with runtimes of 6 and 1.5 hours respectively. It’s powered by a Li-Polymer battery that can be recharged via micro USB, but it can also operate using 2 AAA batteries.

The HP3R is constructed of high-grade aluminum, is impact resistant, and the LED is recessed and protected to the point where you’d have a difficult time breaking it unless that were your purpose.

One thing to note is that the pocket clip is just that. It’s at the base and faces toward the bulb end so it cannot be clipped to a hat bill. Otherwise, it’s an excellent light. 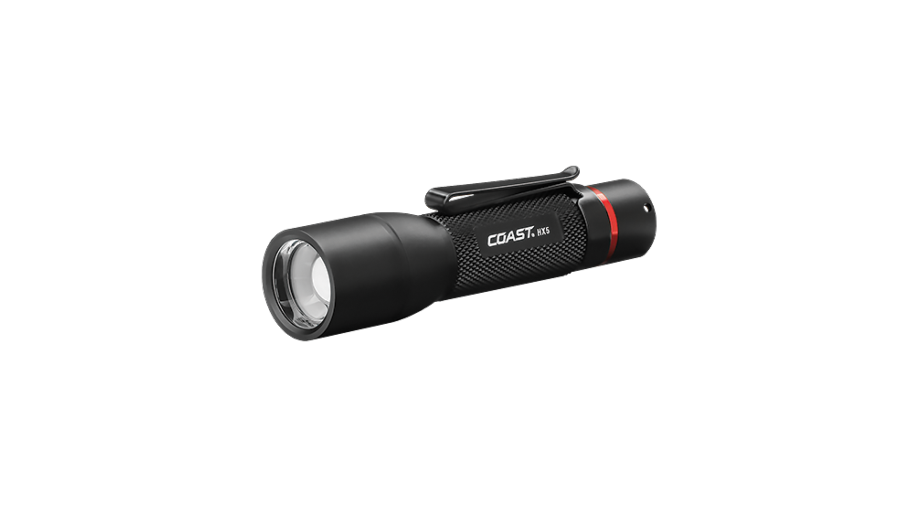 If that’s a deal breaker, you should consider the Coast HX5 ($26). This 4 x 1 in. form factor offers 130 lumens, a 765-ft. beam, and can be powered by both a single standard alkaline, rechargeable NiMH, or rechargeable Lithium 14500 AA battery. Coast claims the output jumps by nearly 3 times if using the Lithium option. I don’t know how to measure that, but it’s noticeable brighter. While the HX5 shares the same build quality as that of the HP3R, the spot and flood beam is activated by pulling the head instead of twisting, it can’t be charged via USB, and it features a 2-way clip so it can attach in either direction, and to a hat bill.

If neither of these options tickles your fancy, head over to Coast’s website. They’ve got a model to suit just about any need.