Geared Up: Start Your Season 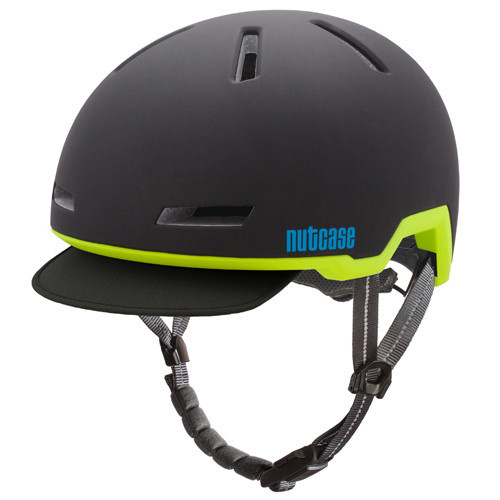 Not all of us need the fanciest, lightest, most high-tech helmet, at least not all the time. Sometimes I just want to throw a bucket on my head and ride to the grocery store. Nutcase has been making casual cycling helmets for years, and their latest, the Tracer, carries on the tradition of providing a basic helmet but this time with a few added flourishes. The Tracer features a magnetic strap closure, a retention dial, and a removable visor that I took off on my first ride — it’s probably more useful if you ride in an upright position. But the best feature is the adjustable vents. I used the Tracer mainly in the winter and, with a knitted hat underneath and the top vents closed, my head stayed nice and warm. The Tracer is pretty fetching, too, in Eclipse Black — matte black with a lime green accent. $90 isn’t cheap for fairly basic brain protection, but the Eclipse’s all-weather capability is hard to beat. –DM

Shimano’s new Explorer series is a line of packs, shoes, and apparel for commuters, touring cyclists, and casual riders. Within the Explorer series is the Transit line of apparel, which includes the shirts and jacket reviewed here. The common thread among the items offered in the Explorer series is they give you what you need to cycle comfortably — freedom of movement, breathability — while still looking snappy both on the bike and off. Not everyone wants to seem like they rode straight from the Giro d’Italia to the coffee shop. –DM 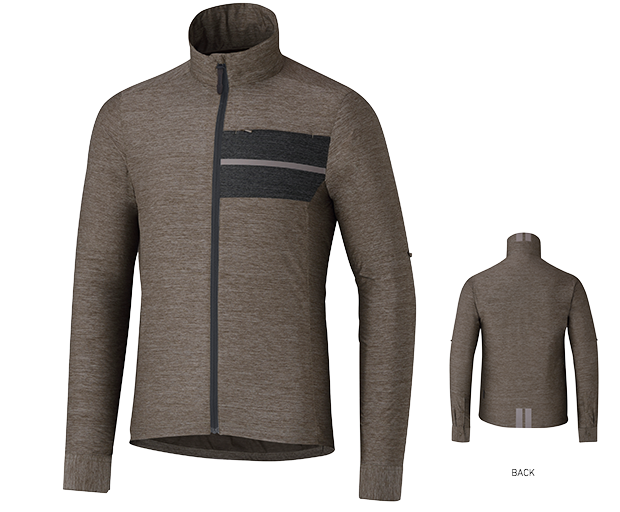 The Windbreak Jacket is an attractive piece with a modern heathered look that is echoed throughout the Explorer series. It’s kept me warm on cool rides and has a water-repellent coating that can shrug off a quick shower but nothing more. I wore the Windbreak during a downpour and it soaked through in minutes. Luckily, it dries quickly as well. 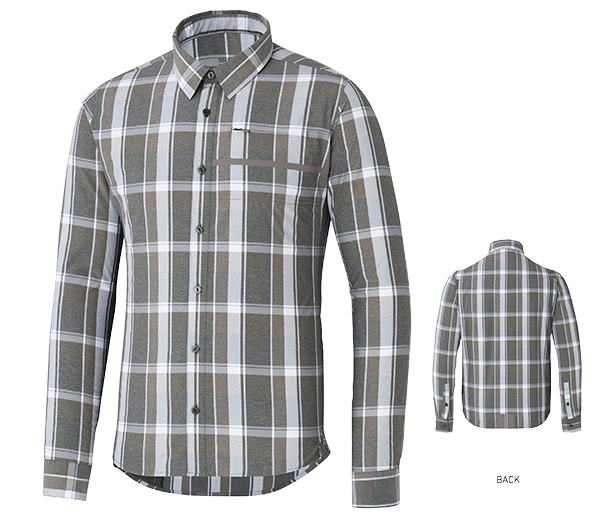 The Check Button Up Shirt (Plaid Button Up might be a more accurate name) is breathable, quick drying, and protects you from the sun all while sporting a sharp look that doesn’t scream “road racer.” It even features reflective accents and two zipper pockets, but storing anything heavier than a gel in the rear pocket will cause the shirt to list to one side. The fabric has an odd papery feel to it, but the Check looks good and performs well for commuting and casual rides. 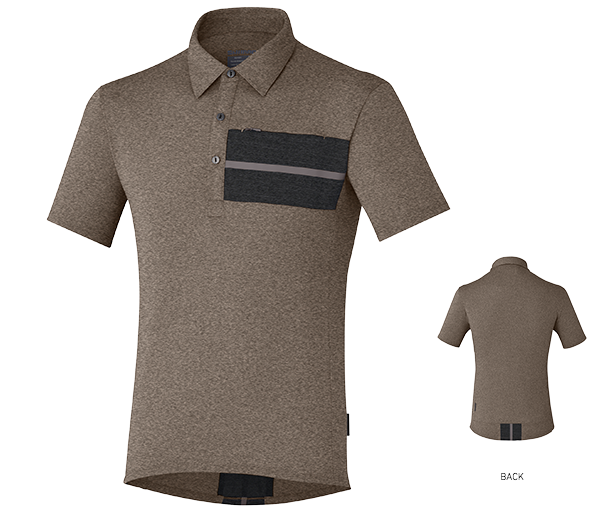 The Polo claims all the same features of the Check Button Up but with a tighter fit and a much softer fabric. It looks like any other modestly appointed polo shirt, but it has quite a bit of stretch and breathes very well. I wore this shirt on long mountain bike rides and barely noticed it was there — high praise for a shirt. Note to Shimano: if you’re going to put a rear pocket on a shirt, put it in the center. 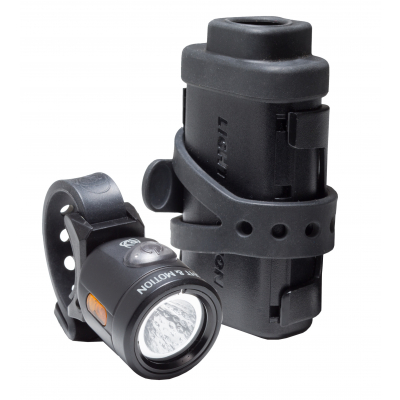 It's not exactly night riding season, but the Imjin from Light & Motion has stayed near my pack even as daylight has started lingering until bed time. The small and versatile unit throws out a healthy 800 lumens and has found homes on my handlebars, helmet, and in hand through the spring months. For a tour, it's more than enough light to show the way if you're out after dark and as a camp flashlight that offers megawatt output. Plus, as a mountain bike (or fat bike) light, it's fantastic as part of a pair to extend the season.

Downsides? There are a few, namely the connection between the light's cord and the battery. It's snug to keep elements out, but it's also really snug. When pushed together, there isn't a satisfying click to confirm everything's solidly joined — and if I'm totally honest, I also missed the large silver arrows to show correct alignment on my first try and was perplexed as to why I couldn't get the darn thing to turn on.

All in all, the Imjin is a fantastically versatile light from a company that makes their products in America, a combo that's hard to beat. –AS 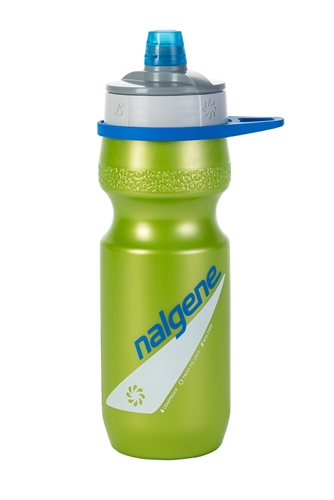 I seem to collect water bottles like fleece jackets collect dog hair, but there's only one brand I've ever had any allegiance to — heck, only one brand I could probably name: Nalgene. Fond memories of Boy Scout trips of yore are peppered with groups of us attempting to break the brand's "unbreakable" wide-mouth bottles and enjoying the status that came with the widening sticker collections and battle scars that adorned them. So the brand's new bike bottle caught my attention when it showed up.

All in all, it might be a few bucks more than a random shop bottle, but the clever cap is worth it if you ever place your bottles in bags or otherwise non-upright positions, and while I haven't filled it halfway and heaved it off a small cliff as I once did with another Nalgene, durability over some six months of regular use has been excellent. –AS 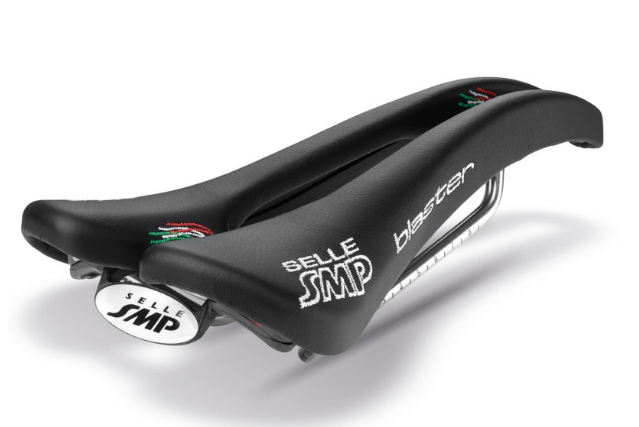 Despite their unique shape, I’ve been a fan of Selle SMP’s curvy saddles for several years. My go-to choice is the Drakon, and this is coming from a guy who never used a cutout saddle model until he found Selle SMP. It was a big departure from my usual perches, but for me, there’s no turning back.

The Blaster is the newest model from the Italian firm. It has a slightly flatter profile than my usual Drakon. This makes it great for mountain biking and for people who like to move fore and aft on the saddle as they ride. With minimal padding, it may scare off some, but focus your attention on its shape. The curvature cradles your pelvis and the large cutout helps promote circulation to vital bits. The shape takes a short adjustment period, but in the case of this reviewer, my hindquarters have never been happier. –NL 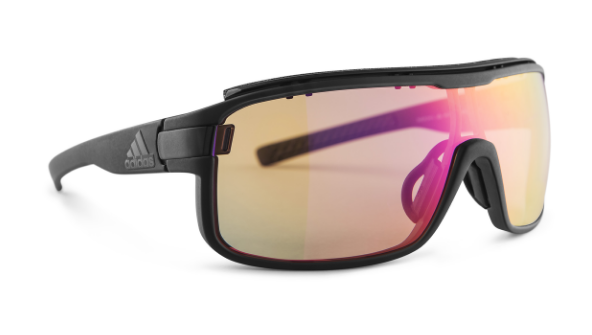 Adidas’ apparel and sneakers may be more popularly recognized, but the German firm has been in the eyewear business for some time. The Zonyk Pro sunglasses come in a variety of colors and sizes and pack in features that any cyclist will appreciate. The fit is adjustable thanks to the inclusion of two nosepieces. Additionally, the angle of the ear pieces can be adjusted at the temple, ensuring that the glasses vent properly and fit closely to your cheek.

On my narrow head, the smaller of the two sizes fits nicely, providing great field of vision without devouring my face. I used the included detachable foam bar that runs across the top of the glasses to keep out sweat on a few occasions but left it off for the most part. My favorite feature though is without a doubt the Vario photochromic lenses that automatically adjust to changing light conditions. I rode in the Zonyk Pros at night and on sunny days with no problems. These lenses are amazing, but it’s worth noting that they also drive up the price. Need prescription lenses? The Zonyk Pros are compatible with those too. –NL