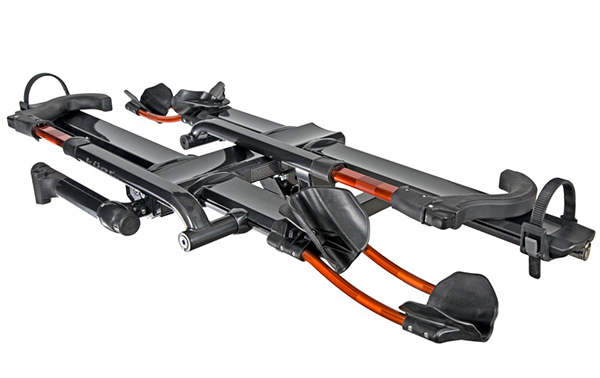 If trailhead rack envy is any indication, Küat already had a winner on their hands with their original NV hitch rack. Still, with the release of the updated NV 2.0, they found room for improvement, making its sleek design sleeker still, and growing its already robust line of features.

The NV 2.0 needs some light assembly before installation, but it comes with the required tools, clear instructions, and a branded tote sack to store these essentials. Right out of the box, it’s clear that Küat put considerable effort into making a rack that’s both functional and attractive. At 50ish pounds fully assembled, it has a comforting heft to it — the kind of heft you appreciate at highway speeds with precious two-wheeled cargo — and the glossy powder coat is downright pretty (and appears durable).

Assembling the rack took around 20 minutes. It was helpful to have a second pair of hands to hold the rack during some of the final stages of assembly, but you could certainly put this rack together solo. Once assembled, installation was just a matter of slotting the rack into the hitch receiver on my Subaru, sliding the hitch pin and included lock through, and cranking down the knob to tighten the connection between the rack and the hitch. Küat’s hitch cam system snugs things up nicely, but speaking from experience, be sure to tighten the knob fully with the included Allen wrench (conveniently stored in the rack itself) or risk a wiggly connection after a few bumps on the road.

Rack assembled and installed, I loaded up my road and mountain bikes for a weeklong desert road trip. In rack terms, nothing compares to the ease of loading bikes onto a well-designed hitch rack, and the NV 2.0 is dead simple: lift each bike onto its tray, secure the front wheel with the ratchet arm, and cinch down the rear wheel with the rear ratchet strap. Despite its rugged construction, the rack’s components move smoothly and easily.

Here’s where I noticed a bit of trouble: Küat recommends positioning the front ratchet arm as close to the fork as possible for the most secure grip, but after a few hours of highway chatter, the ratchet arms had migrated to the point of actual contact with the frame. This also had the effect of lessening the arm’s grip on the tire, so while neither bike was in danger of falling off, they were jostling around — and the cable guide on my mountain bike had started to wear away at the inner material of the arm. Küat was very responsive, explaining that they’d designed the arm’s inner material to be softer rubber for this very reason, but I still found myself checking for wear and tear on my fork and the ratchet arm (and on the arm’s grip strength) at most gas stops. Eventually, I got used to it.

One other caveat: at five-foot-six and not much of a power lifter, I sometimes doubted that I had the leverage to ratchet the arms down to their full grip potential. This was confirmed when my six-foot-three younger brother was able to lean down and get a few more ratchets in despite my best efforts. Not enough of an issue to make me uncomfortable transporting bikes without a giant on hand to help out, but worth noting.

Those nitpicks aside, the NV 2.0 functions so smoothly, it’s almost elegant. When not loaded, the rack folds vertically, a move made easy thanks to its redesigned pivot and foot pedal. Using the pedal, you can swing the rack upright, back down to horizontal, and also tip the rack backwards to allow for access to your car’s rear hatch, even with bikes loaded. Since the best bike lock is the one you have with you, I really appreciated the integrated cable locks, which make securing bikes a no-brainer. The cable locks (keyed identically to the hitch lock) did seem to suffer a bit from road gunk buildup — nothing some slight key jiggling couldn’t solve.

The rack’s wheel cradles, redesigned to fit a wider range of tire sizes (up to 4.8 inches with the addition of a Phat Tire adapter kit), have a series of channels that held both my mountain and road tires securely, and can be adjusted up and down to improve clearance between saddles and handlebars. The rack will support a maximum weight of 60 lbs. per bike, wheelbases up to 48 inches long, and wheel sizes from 20 to 29 inches. Two hitch sizes are available (1.25 inch, tested here, and 2 inch), and the 2-inch hitch size offers the option of bolting on another two-bike rack for a total carrying capacity of four bikes.

The NV 2.0 also includes a nice bonus: the Trail Doc, an integrated repair stand that can be extended from the rear of the rack for maintenance at the trailhead or on extended road trips. I was lucky enough to not have to use the Trail Doc much on this trip, but setup was easy and it’d be a welcome perk when needed.

The rack retails for $629 — a pretty penny that might not be worth it for looks alone. But the NV 2.0 delivers solid functionality and is a pleasure to use, too, justifying its place in the top tier of hitch rack pricing and performance. –CN 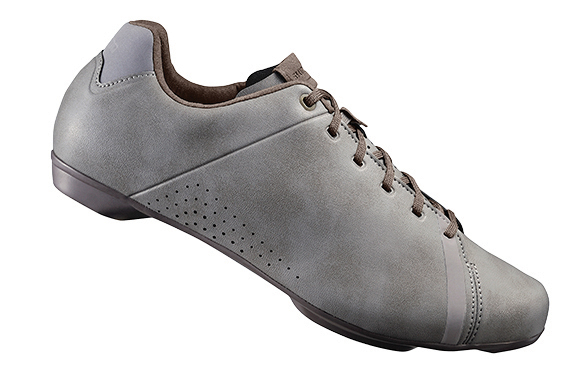 Like the rest of the Explorer line, Shimano’s RT4 SPD shoe is intended for commuters, touring cyclists, and casual riders. It has good, old-fashioned laces with a lace keeper, reflective accents, and the look of a snazzy bowling shoe. With a glass fiber reinforced shank, it rates a five on Shimano’s own stiffness scale (compare that to a 12 for their new S-Phyre racing shoe), but I found them plenty stiff enough for daylong rides on road and gravel. I’m a solid size nine and the RT4 fit spot on with room for thicker socks. You may want to size down if you’re a thin sock person. What the RT4 is missing is much in the way of ventilation — it has holes in the tongue and on either side of the arch, but nothing on the toe. But fewer holes mean it’s a pretty decent shoe in the wet. I wore them in a few downpours, and my piggies stayed warm and dry much longer than they would have in my other, more ventilated, shoes. The Shimano RT4 has comfort, high style, and the features to cross over into long rides. And at $120, it doesn’t lighten your wallet much more than a pair of good bowling shoes. –DM

Sometimes it’s the simple things that are the most satisfying. After falling for the Swift Industries Sugarloaf Bag (see my review in the August/September 2017 issue) I realized that my bar-mounted light now had part of its beam obstructed by the bag. Long summer days in Montana mean there’s not much use for lights, but I found myself caught out after dark and had to rig up a very temporary solution to light my way home. So instead of freelancing my own ideas — a journalism degree is not conducive to great engineering — I reached for a Paul Gino mount. The simple machined cylinder attaches to mid-fork or rack mounts, or directly to existing racks outfitted with the required braze-ons. One M5 bolt threads in and a lock washer holds it all snug. You attach a light as you would to a handlebar and you’re off to the races. Besides moving the light to a spot where it actually works (in my case to a mount on my Soma Champs Élysées Mini Rack), a lower-angle beam on the road tends to better illuminate potholes and surface conditions. –AS