From Campaign Trail to Tour Divide 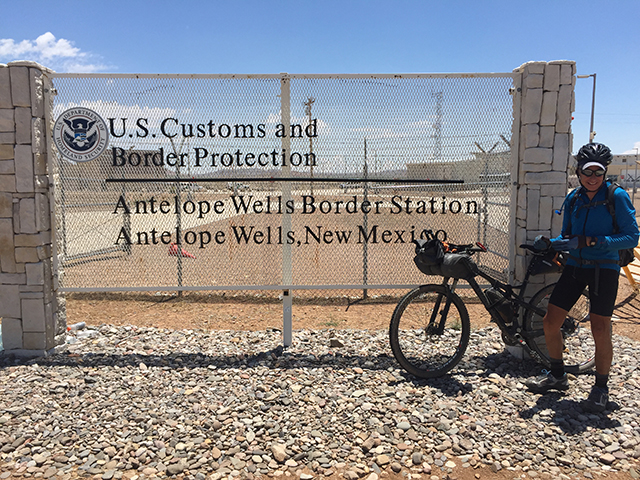 A little over two years ago, Gary Johnson hit the trail for the ride of his life. He knew from the beginning there would be a crowded field, steep, climbs, lots of winding roads, plenty of wrong turns, lots of self-doubt, and, of course, exhaustion.

What was his plan after crossing the finish line in third place on the 2016 campaign trail? A trail with that same description: the 2,700-plus miles of the 2017 Tour Divide, a bikepacking race on the famed Great Divide Mountain Bike Route. (Follow Johnson's progress in real time here.)

For this race, though, the Libertarian presidential candidate was on a literal trail and competing only against himself, only trying to finish. Thirty-five days after leaving Banff, Canada, Johnson did just that in crossing the finish line in Antelope Wells, in the southernmost part of the state where he served two terms as governor.

While he says he won’t be running for president again (he also ran in 2012), he had such a great experience on the Tour Divide last year that he is tackling the course again in 2018.

“It was a wonderful event,” Johnson said. “It was an adventure. It was really fun to see arguably the most beautiful 2,800 miles in the United States.”

Johnson is no stranger to challenging feats of endurance. He’s run 17 marathons, including an impressive personal best of 2:47. He’s completed four Ironman triathlons in Hawaii, including a 10:39 in 1999. His mountain bike resume is equally noteworthy, including eight Leadville 100-milers, the six-day Breck Epic, the 425-mile Cape Epic race, and the 625-mile TransPortugal course. On top of that, Johnson is one of only about 400 people to scale the Seven Summits, the highest peaks on all seven continents.

For Johnson, the Tour Divide was on par with those climbs.

Johnson says there was only one thing that really made him question whether he would finish, and that was a literal pain in the rear.

“I seriously wondered about my ass,” Johnson said, half joking. “That was what was going to do me in — my inability to deal with it. I had problems for about half of the ride. I thought I would need ass replacement surgery. At least three times a day for about 18 days I was just slathering with butt butter. That prevented any sores or chafing. After 18 days I was able to give up the butt butter. All of a sudden I had a leather ass.”

Outside of reaching, um, bottom on those early days, Johnson had to contend with two other obstacles that the Tour Divide is famous for: bears and mosquitoes. The bears ended up not being much of a problem.

“I saw a couple grizzly bears,” Johnson said. “I saw both of them from about a 50-yard distance. They were on the downhill and I was on the uphill. When they saw me, they were gone. They didn’t want to have anything to do with me — you could see that.”

The mosquitoes also were not too much of a headache, thanks to a friend who gave him a mosquito net for his head prior to the race. Johnson originally refused the offer, but finally accepted the gift and is glad he did.

While Johnson plans on bringing the mosquito net again, he doesn’t expect to pack quite as heavily as he did last year. He estimates that with all of his gear — bivy sack, food, repair kit, three liters of water — that he was going down the road at 54–62 pounds. For the 2018 race, he plans to swap his bivy sack (“like sleeping inside a plastic bag; you end up soaking wet) for a tent and to camp more. He says he lost many hours by stopping late in the afternoon when he came upon lodging instead of continuing on for several more hours.

“I camped out 13 days and stayed in a hotel 21 days,” said Johnson, who averaged 80 miles per day. “I need to reverse those numbers, which I think I can do.”

A change in equipment could also help him shave time. In 2017, he rode a Specialized S-Works Epic full-suspension mountain bike. This time around, he’ll be riding a hardtail S-Works Fuse with three-inch tires. He’ll also bring a light, allowing him to ride later into the evening.

Perhaps the most time-saving bit of equipment will be better navigational tools. While he mistakenly missed a turn coming out of the Tetons that ended up saving him about 90 minutes — he didn’t realize it until two days later, when it was too late to go back and be course-legal — he took more than a half-dozen wrong turns that he estimates cost him half a day.

He’ll also be provisioning differently now that he knows where the food and water are and how much he needs to carry with him, and packing less will allow him to go a bit faster. Presuming he’ll have the good fortune again of not having much bad weather or mechanical problems, he hopes to finish in under a month, although his main goal is once again just to finish.

“Everything being equal, I could maybe cut seven days off,” he guessed.

He’ll also be entering the race in better shape. From the end of his presidential campaign to the end of the race, Johnson shed 30 lbs.

“The Continental Divide diet — guaranteed to leave you lighter or double your money back,” Johnson joked.

Johnson is looking forward to the hospitality of the people on the route once again.

“Everyone was terrific. People were always helpful, always offering things,” he said.

Regardless of whether he cuts time off this year, Johnson is looking forward to not only the challenge, but also the time of Zen.

Bob Bergland is a professor of journalism and digital media at Missouri Western State University.