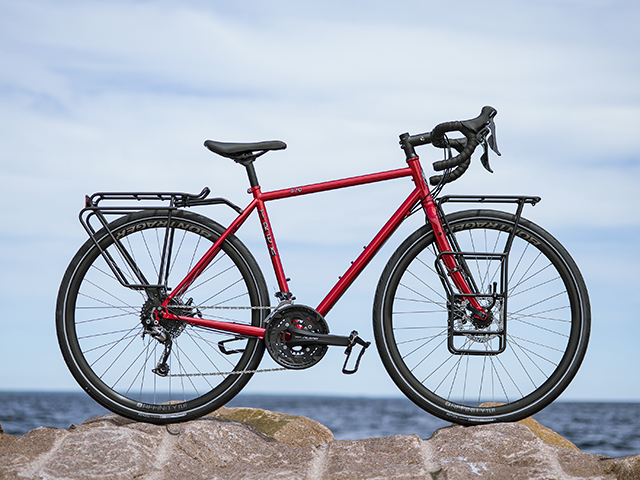 Trek’s longest-running model is one of the touring world’s foundational bikes. The 520 turns 36 in 2019, and true believers in the Wisconsin brand’s touring heritage search out vintage editions with as much fervor as they watch for new releases.

Well, after releasing the 520 Disc a few years ago to provide a slightly more modern option, Trek has dropped “Disc” from the name but made the change to disc brakes permanent, along with a few other deviations from the traditional.

First and foremost, rim brakes are nowhere to be found, and the 520 Disc’s adequate Hayes CX mechanical discs are upgraded to TRP’s excellent Spyre-Cs, which combine the field-serviceability of cables and the closest approximation to a hydraulic feel without any fluid involved. Gone too are bar-end shifters, with Shimano’s Sora brifters taking over the work of shifting the venerable 3x9 drivetrain.

That switch to brifters also comes with a change from the old model’s Deore drivetrain to Shimano’s latest Alivio group. I was skeptical of this value-oriented mountain bike group at first, but shifts have been smooth and all parts trouble-free.

Most other parts, from the cockpit to the wheels to the rubber, wear Bontrager branding and have been no-nonsense. The armored 700c x 38mm H1 Hard-Case Ultimate tires sport reflective strips and a ride reminiscent of Schwalbe Marathons, which is to say firm but predictable. Plus, they should be good for about a zillion miles.

The frame remains Trek’s chromoly — clad in either “Diablo Red” or a silver “Anthracite” paint job and retro badging — but the new 520 breaks from tradition with an aluminum alloy fork. I’ve been testing the red bike, and it must be said, this thing looks fantastic. The art deco branding was a big hit with Adventure Cycling’s design staff, who claim to have good taste in such things.

The 520 adds a front rack to its included equipment, and it’s a doozy with a top deck and multiple options for mounting luggage. Because it’s bespoke, installation was a breeze, something anyone who’s fought with front rack compatibility issues can appreciate.

So does the 520 remake betray its heritage, move it to the top of the heap, or something else entirely? Watch the December 2018/January 2019 issue of Adventure Cyclist magazine for our full Road Test.

Alex Strickland is the Editor-in-Chief of Adventure Cyclist Magazine.