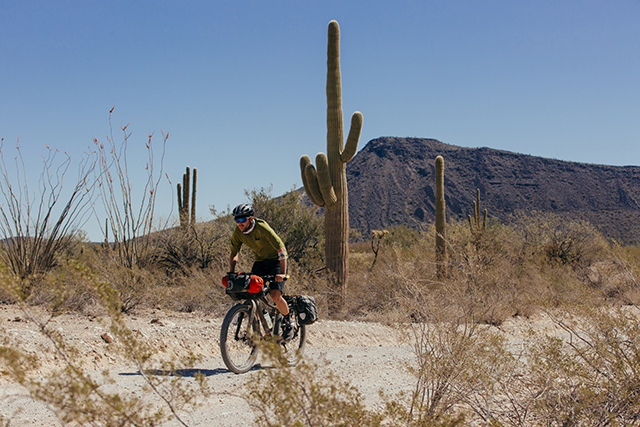 Ajo, Arizona. It’s just two hours south but a world away from the bustling city of Phoenix. Saguaro cacti vertically punctuate the arid landscape, one with rolling terrain and nearby mountains. The Plaza, with its beautifully maintained Spanish Colonial colonnade, frames two gleaming white churches and the impressive Curly School, now converted into artist apartments. The vibe is friendly and relaxed, with a sun-baked mañana feel. Life might move slowly here, but that’s just how Ajo residents, a wonderful mix of Tohono O’odham Native Americans, Mexican-Americans, and Anglo retirees, like it.

I was there at the invitation of REI for a three-day bikepacking trip starting and finishing in the former copper mining town. Headquarters were at the Sonoran Desert Inn and Conference Center. Like the Curly School it neighbors, the Inn is a series of tastefully converted classrooms. Built around a central courtyard that is now a community garden, the hotel is managed by Emily and Stuart Siegel, a passionate pair of Ajo transplants with an amazing story of their own.  The Siegels took great care of us, with catered meals and locally roasted coffee. 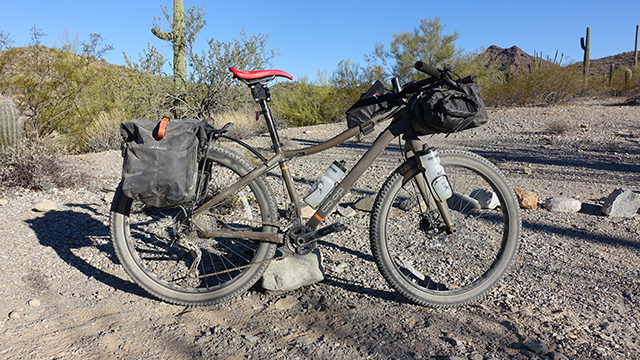 Beyond tourism, we were there to check out the latest Co-Op Cycles line of adventure bikes, getting them dusty in rough conditions. For this desert trek I was lent Co-Op Cycles' new ADV 4.2, a 27.5+ tired, Jones Loop bar, off-road explorer. On paper it looked like the bee’s knees for our upcoming ride.

Its rigid aluminum frame and fork feature rack mounts as well as myriad braze-ons and a threaded bottom bracket. Each fork leg has three bottle bosses, great for water bottles or cargo cages. The underside of the down tube receives the same treatment, providing a great spot to carry heavier items or extra water.

Shimano SLX cranks, bottom bracket, derailers, and hydraulic disc brakes are joined, in a nod to reliability, by Microshift thumbshifters. Cane Creek’s Thudbuster seatpost added an extra measure of comfort on the washboard rocky roads of southern Arizona. Up front is an aluminum Jones Loop handlebar with its many hand positions and accessory-mounting possibilities. 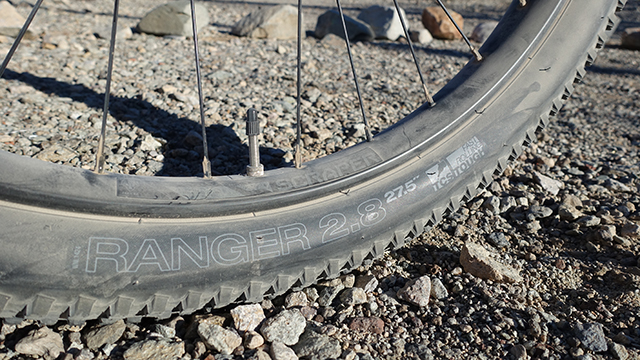 WTB provides both the wide Scraper rims as well as the tires on the ADV 4.2. On the rugged, prickly terrain of America’s Southwest, the 2.8in. Ranger Tough Casing tires were a good call and are certainly up to the task of off-road touring anywhere.

Also included at the $1,899 price is a pair of stout front and rear racks. For the three-day ride I only used the rear rack, preferring to run a Revelate Sweet Roll and Egress pocket instead of front panniers. I also used Revelate’s excellent Mag Tank top tube bag to keep snacks handy. Ortlieb provided Gravel Pack panniers for the rear rack. I installed my go-to saddle, a Selle SMP Blaster, and a pair of Shimano SPD pedals, and I was ready to roll.

Over the rugged Arizona roads, I bounced my way through sandy sections, jagged rocks, slow climbs, and fast descents. Long sections of dirt were punctuated with bits of paved road. In all cases, the ADV 4.2 performed exceptionally well. I loved the comfortable, upright position afforded by the Jones bars and the dropping top tube provided ample standover clearance. The shifting was crisp and the thumb shifters were easy to use. Stopping was never an issue with the hydraulic Shimano brakes and large front rotor. Other journalists and REI representatives on the trip were aboard Co-op’s ADV 3.1 and 3.2 models. These too shine on paper with reliable parts, touring-focused features, and affordable prices. Both are dropbar models with disc brakes and Donnelly MSO 650b x 50mm tires retailing for $1,199 (3.1) and $1,699 (3.2). For more details head here. 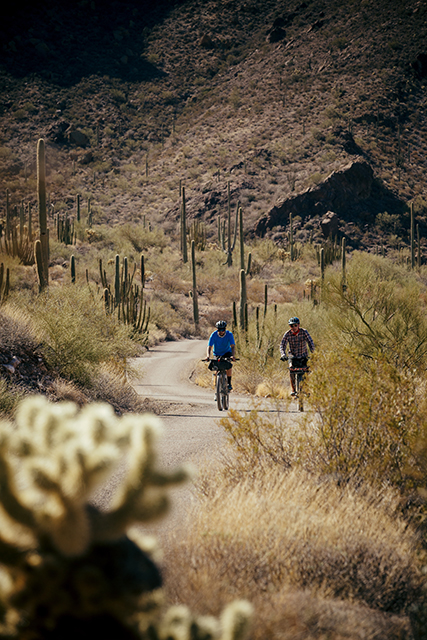 While these bikes were certainly up to the task of the Sonoran roads, those of us on the ADV 4.2 were definitely smiling through the technical terrain more than the riders on narrower tires. The ADV 4.2 is a well-executed dirt road and trail machine. The tough, wide tires, spot-on geometry, and Thudbuster seatpost all help take the edge off of bad (and by “bad” I mean the best) roads. If your rides stick to more manicured surfaces, then perhaps other Co-op Cycles options will suit you better.

That said, I do have a couple criticisms on the ADV 4.2. It doesn’t have a bottle cage on the seat tube despite plenty of room for it. The seat tube does have a curve to it and that probably explains it for some.

The ADV 4.2 also presents a bit of a conundrum for me as a bike that is so capable in rough terrain but which arrives equipped with racks. On our trip, the number of issues our group encountered with both the racks and the panniers rattling loose was too large for my taste. Even with additional straps and an elastic net to help my panniers stay in place, they still managed to come unhooked on the rough tracks we covered. Unless the dirt roads you have in mind are a bit smoother, I would recommend using soft, bikepacking bags on a bike like the ADV 4.2.

But in the end, our entire crew, regardless of bike choice or mid-ride mishaps, made it back to our starting point at the Sonoran Desert Inn. Doing so felt like a small homecoming. There is something special about Ajo. While some might point to the intriguing mining history of the area or the beauty of the Sonoran Desert, what sets Ajo apart is the passion of its residents and fans. The Siegels at the Sonoran Desert Inn who, after selling off their worldly possessions, set out on a yearlong road trip to rediscover their love for life and settled in Ajo. Brian Jump, a local guide for REI Adventures, has obvious love for the area. The kooky, artistic lady who saw a dozen riders pass by her front yard and wished us a good trip and counseled caution on the highways. Or Bob Hightower, the 87-year-old retired miner who enthusiastically described the Ajo mining glory days. They all bring a desert-crisped energy to an area that many discount as a border wasteland. So grab a bike — a Co-Op Cycles ADV 4.2 is a great option — and head down. Tell Emily and Stuart I sent you!

Nick Legan is the Technical Editor of Adventure Cyclist. Photos by Jill Richards/REI and Nick Legan.