The annual Interbike tradeshow that takes Las Vegas by two-wheeled storm every September might be the American mecca of cycling gear, but some six weeks earlier outdoor enthusiasts of all stripes make a pilgrimage to Salt Lake City for Outdoor Retailer, a summit of all that is gear from pretty much every corner of the outdoor world.

This year’s OR Summer Market runs through the weekend (sorry, it’s not open to the public) and Adventure Cyclist is roaming the floors to find the latest and greatest in gear for the bicycle traveler. Most of these items won’t hit shelves until next Spring, but a few will be available before the holidays, or are out now. Keep an eye out on Monday for another dispatch from the show, but in the first two days, this is what we’re seeing: 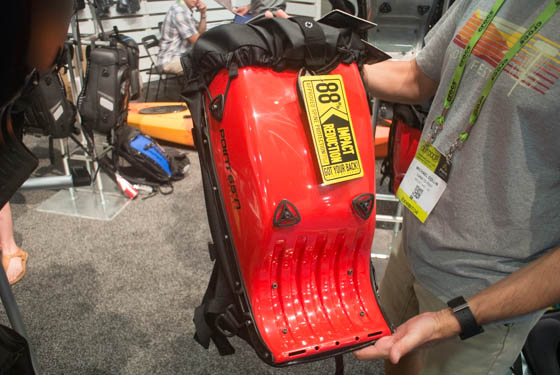 A hard shell backpack? Yeah, a hard shell backpack. Probably not for most, but offering an absurd amount of impact protection for anyone who wants a little more safety for themselves and their gear, these packs in 20 and 25-liter sizes from the Swedish brand could do the trick. If you have any doubt about their toughness, just break out your old softball bat and take a swing. We did. 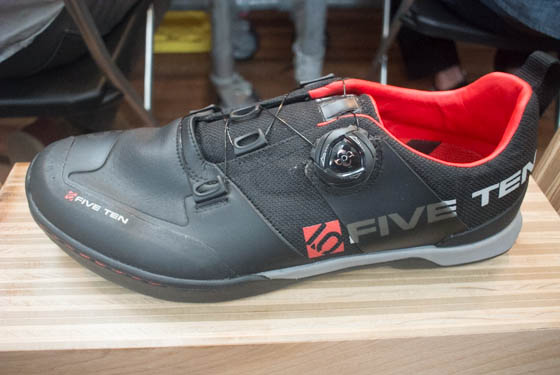 Most roadies or gear nuts have probably seen the Boa system on a shoe before—the company’s cable and tensioning wheel system is found on shoes from Specialized, Five Ten, and others. And at Outdoor Retailer the brand employs a fleet of workers to swap out the laces of footsore attendees for a Boa system to get them familiar with the product. We’ll be keeping an eye out for a big partnership launch from the brand with a bike industry heavyweight next month in Vegas. Rumor is, big things are afoot! 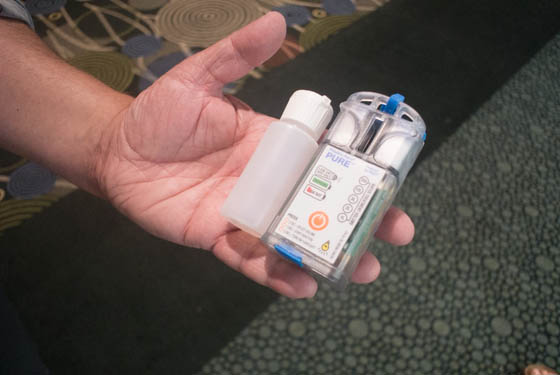 As a Boy Scout, we didn’t trust any kind of mechanical water filtration system, we demanded the assurance (and awful, if memorable flavor) of chemical purification via iodine drops. Well, the maker of that ubiquitous brown medicine bottle of our youth has developed a tiny water purification factory called the Pure that can fit in your pocket. Requiring only a charged battery (each charge can purify 150L of water) and table salt, this fascinating device pumps a small electrical charge through a salt and water solution to create a small amount of hydrogen peroxide that you then drop into your bottle of water and in thirty minutes, presto, you’re good to go. Though various methods of purification certainly have their distinct pros and cons, one upside of chemical treatment is the ability to burp water into the bottle threads to make sure that your safe-to-drink container of H20 isn’t passing through a minefield of nasties on its way to your lips. No, the Pure isn’t a small as a purification tablet, but no matter what corner of the world you’re in, we bet you can find a dash of salt to make your drinking water safe. 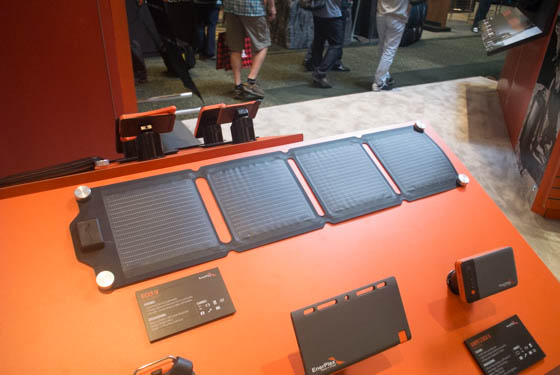 Portable power is everywhere at Outdoor Retailer, but the flexible plastic panels from Enerplex caught our eye. The company holds the patent for the plastic-backed construction and the solar elements feel almost printed on the waterproof, flexible panels, meaning there’s no fear of dropping/bending/smashing your source of backcountry juice. Available in multiple configurations and able to charge some devices straight from the panels without the need for an intermediary power pack, the more modest panels look like a great option for a lightweight setup. If you’re planning a film shoot complete with laptops and video cameras, they’ll outfit you for that too, but you better have a cargo bike booked for the trip. 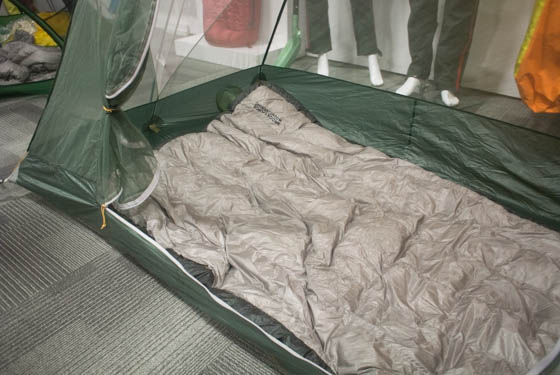 Associated with the sport in their name, Brooks Range has some intriguing options for the bicycle traveler. A clever, short-sleeved, fleece-backed windbreaker shirt has potential as a Goldilocks layer in certain conditions and the brand was one of a few offering a new blanket-style sleeping solution. Nothing revolutionary about a blanket? Maybe not, but options rates down to 20 degrees and filled with hydrophobic down (so it’s not a useless lump if it gets wet) make for options beyond the standard mummy bag setup. 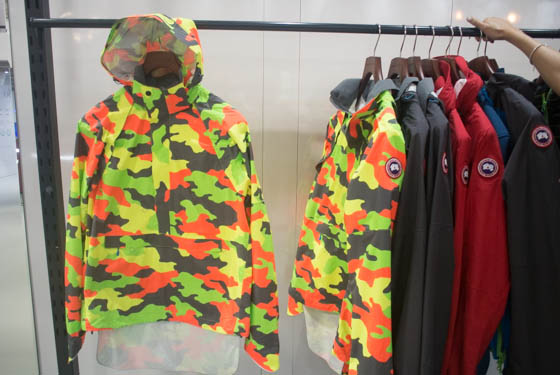 In a booth outfitted with a giant freezer set to 15 degrees to showcase the company’s cold-weather offerings, Canada Goose continues to display influence from its cycling-enthusiast designers. A new anorak (available in standard colors as well as a sounds-like-a-contradiction-until-you-see-it camouflage) features thoughtful touches for the cyclist: a drop tail that stows out of the way via hidden magnets when not in use, and a helmet-compatible hood and sleeves that are removable (again, thanks to hidden magnets) to leave a vest behind. The company’s line of laminate shells and associated down and soft-shell layers are up for pretty much anything up to an including an Arctic expedition, and the brand’s waterproof laminate shells offer a few small but important features that keep them from clamming up against your skin when things get wet. 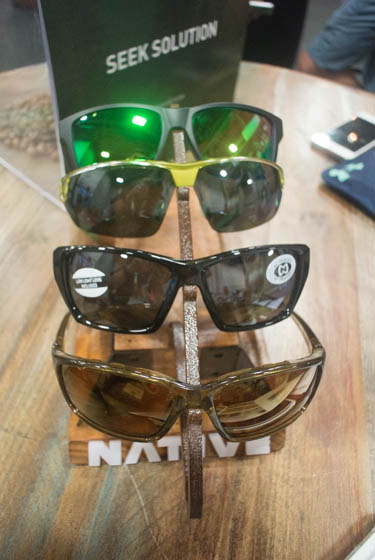 Though rooted in a performance-focused past, the folks at Native are embracing the do-it-all eyewear trend with a line of sunglasses that are pretty well equally at home on a bar stool or a bike. The brand’s Flatiron combines high-quality optics with a classic frame design that looks great in town too. New green mirrored lenses might be a little on the flashy side for some, but the copper-tinted perspective remains one of our favorite variable light lenses. 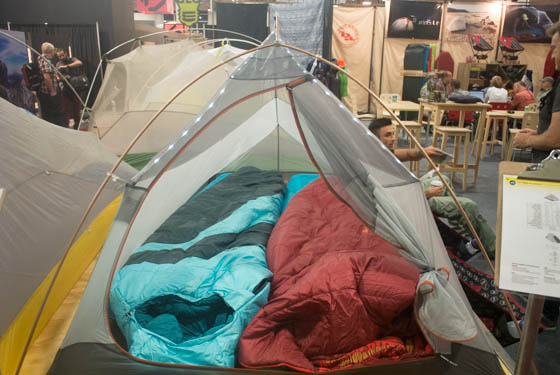 Here’s a question we posed to the folks at Big Agnes: Do we need LED lights in our tent? The answer is “no, but you probably want them.” We believe them. The company’s super light mtnGLO lights are sewn into the seams of popular tent models and add convenient ambient lighting with a mere 2 oz. weight penalty. A Big Agnes spokesman put it like this: “With a headlamp there are shadows and you’re looking for stuff and it feels like a cave. With these lights the tent feels like a room.”