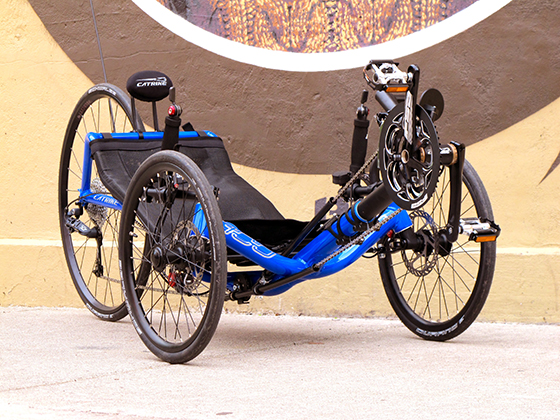 In 2000, Paulo Camasmie, a mechanical engineer from Brazil, became infatuated with recumbent trikes. So much so that he left his job behind and decided to start building and selling them himself.

It was easy to look at this as a foolish proposition. This was long before the recumbent trike market exploded, and even now it’s not much more than a blip on the overall cycling market’s radar. However, 14 years, thousands of trikes, and numerous awards later, Paulo’s leap of faith looks like a pretty smart move.

“I had this concept in my mind that I wanted to push the envelope and see how fast a trike could go. How low? How cool?” Camasmie said in a 2010 promotional video.

The answer to all of those questions has turned out to be “very.” There are two major reasons for Catrike’s success. One is the trademark aluminum spaceframe that Camasmie surprised the triking world with in 2002. This design makes their trikes very light and stiff and gives them a signature look that is immediately recognizable.

The other reason is their sprawling high-tech production facility in Orlando, Florida. In little more than a decade, Catrike has gone from being handmade in a storage unit by Camasmie himself to the 15,000-square-foot factory they opened last year. Most U.S.-based recumbent manufacturers produce at least a portion of their bikes and trikes overseas to stay competitive. Catrike has always built everything in-house.

Because recumbents are built in comparatively small numbers, you can’t always get exactly what you want out of Taiwan and China, and you may have to make sacrifices. Catrike doesn’t have to do that.

General Manager Mark Egeland explains, “There are several advantages to making your own products. I think the biggest is that you learn so much about product design and designing for manufacturing when you do it yourself — the tooling you need to create; every machined part you develop; every tube that is bent, fabricated, and welded together gives you knowledge and insight into how to make better products. Prototyping is a huge advantage as well. You have the resources to make as many iterations as you want and constantly improve your model until you are 100 percent happy with the final product before you start production.”

Remaining cost-competitive while keeping production in the U.S. is a big challenge. Camasmie used lessons he learned while working for Toyota and adapted those just-in-time, streamlined supply-chain theories to work for his company. This lean manufacturing process means that Catrike doesn’t have piles of money tied up in stock and can instead use that cash to reinvest in production and development. 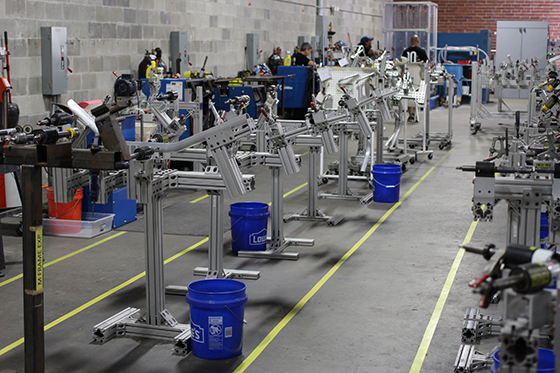 And reinvest they have. In just the last five years, Catrike has invested well over one million dollars on powder coaters, multi-axis benders, CNC machines, and wheel-building machines. This equipment allows their 15 full-time employees to build 2,500 trikes a year with capacity left over for the growth they and the rest of the recumbent trike market have consistently experienced.

Catrike offers tours of their factory once a year at their annual Catrike Rally. It’s easy to see why they would want to open their doors to their customers and dealers. The building is modern and spotless, and the expanse of machines and welding jigs is hugely impressive. The entire staff gives off an air of competence and confidence, and they are very pleasant people to talk to as well.

Over 260 people from all over North America attended the event in March. This number is made all the more impressive by the fact that the largest recumbent rally in the world (the Midwest Recumbent Rally in Stevens Point, Wisc.) rarely breaks the 300-attendee barrier, and it focuses on nearly every recumbent brand rather than just one. Catrike fans are a very passionate bunch.

“After owning a number of other trikes from various manufacturers, I always felt that I was riding on their trikes. After purchasing and riding a Catrike, I no longer have the feeling that I am riding on[ital] their trike, I feel like I am part of the trike. The way in which their trikes are designed and the way the seat is incorporated into the frame, you become one with your Catrike,” said Dan Peters, an owner of multiple Catrike trikes. 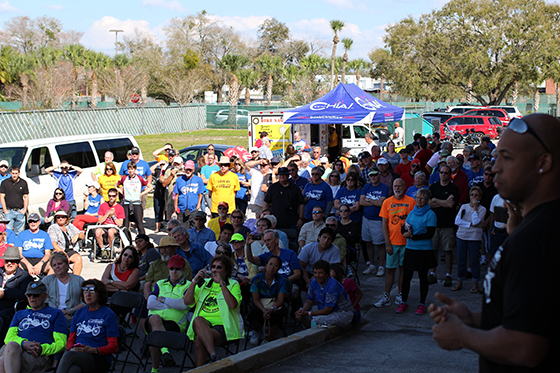 The annual rally is also sort of an impromptu convention that allows the company to touch base with its dealers. Catrike’s worldwide network of 130 dealers is vital to the company’s growth.

“We are always willing to consider new dealers, but we’re very loyal to the ones we have. We turn a lot of shops away,” said Egeland.

Catrike’s dealers have returned that loyalty. Some of their dealers are even more fanatical than their customers. One of these is Lisbon Rail to Trail in Lisbon, Ohio. Owner Wayne Wallace only sells Catrike products and keeps over 100 in stock. He is Catrike’s largest dealer.

When I asked Wallace why he chose Catrike above others and why he has remained so loyal to them, he said, “We looked at trikes costing $5,000 or more and realized that you can get something just as good for half the price from Catrike. We believe that their uncompromising quality and service has placed Catrike above all others.”

In Catrike’s infancy, it appeared to be a company more focused on performance than anything else. In more recent years, their lineup has expanded to include touring trikes, trikes for children and small adults, suspension trikes and now a folder.

Their number-one-selling model, the Expedition, was introduced in 2007 and has held the top spot in their range almost ever since. The Expedition is a 26-inch rear-wheel design that is just as capable of heavily loaded touring as it is of blasting around on your local bike path. Unlike most of Catrike’s other models, it’s undergone relatively few changes since its introduction. The company has flirted with the idea of updating the Expedition a few times, but dealers have demanded it stay just as it is.

This doesn’t mean that the company has been idle by any means. Engineers and designers at Catrike have veered slightly from their spaceframe design a few times over the last few years. Two models introduced in 2011 are still undeniable descendants of the original spaceframe, but they feature adjustable seat angles to accommodate a wider range of customers. In 2012, they introduced the Road with a rear-suspension design that was much more advanced than anything else in the recumbent trike market. At Interbike 2013, Catrike revealed a folding version of their entry-level Trail model.

In the pursuit of even more performance than their trikes could offer, Catrike introduced a two-wheeled lowracer in 2010, but it was short-lived. Trikes are dominating the recumbent market right now, and the bike’s sales didn’t justify its space on the factory floor.

It sounds trivial, but many of the riders I spoke to at the rally mentioned that one reason they chose their Catrikes over other brands was the color. Most trike manufacturers offer their product in only one or two colors. Because Catrike has their own powder-coating booth, they offer every model in seven colors year round and even one or two more during special promotions that take place a couple of times a year. Never underestimate the power of customization.

Recumbent group rides and clubs are few and far between. Most trike riders commune online. Catrike was one of the first companies in the marketplace to really take advantage of that. In addition to their own forum, they are also active on many other message boards and forms of social media.

I was given nearly full access to Catrike’s factory during my visit with one notable exception. Their chief design engineer’s office had obviously been sanitized before I was allowed to peek through a window. It was obvious they didn’t want their secrets out quite yet, but I could see enough to know that big things are still on the horizon for Catrike.