Bikepacking: Searching for a Definition 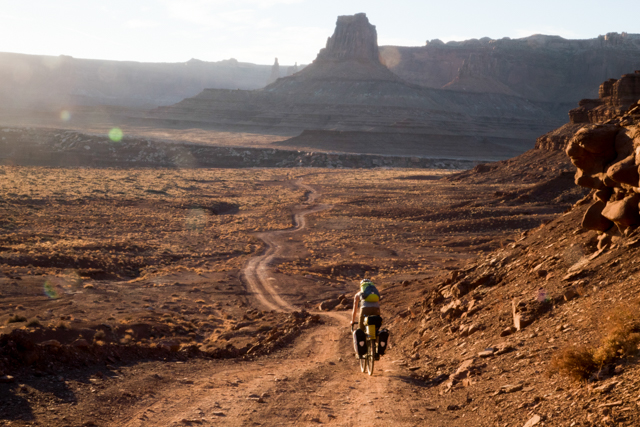 At the Shafer Trail Overlook in Utah’s Canyonlands National Park, I lowered four two-liter soda bottles filled with tap water (16 pounds) into my panniers, then a full four-liter MSR Dromedary (eight pounds) into the framebag strapped to the front triangle of my gravel grinder/touring/commuter bike, then slung my backpack with a full 100-ounce hydration bladder (six pounds) onto my back. As I pushed my bike away from the car it had been leaning on, I cringed at how much it weighed, then reminded myself that the first day was almost all downhill.

Not that many people ride the 100-mile White Rim Trail self-supported because of the almost complete lack of water sources. And if they do, they usually drive the route the day before so they can cache water in a few spots instead of carrying it all with them. But we’re not very smart, so, you know, there we were, the day after Thanksgiving, heading out for four days of riding dirt roads and three nights of camping, 30 pounds of water apiece. 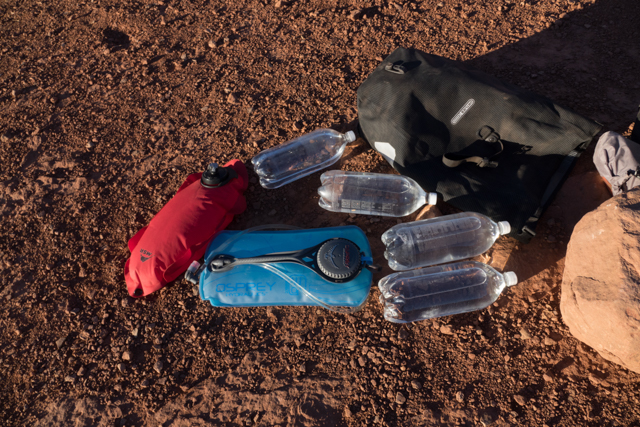 I like bikepacking. I’ve mountain biked a little bit and enjoyed it, but what I really like to do is travel by bike, on dirt roads. I love packing a trimmed-down list of everything I need into a bunch of little bags on my bike and then rolling through someplace I haven’t seen before. But I have wondered: what is bikepacking, really? If you’re on pavement, is it bikepacking? If you use panniers, is it bikepacking? Or bike touring? Is bikepacking just a cool new word for bike touring?

When I did a cross-country ride on the Southern Tier Route in 2010, we called it “bike touring.” Around the same time, I noticed people taking bags that looked like smashed burritos and strapping them under the seats of their mountain bikes and going “bikepacking.” Which seemed pretty rad too — basically, bike touring on dirt. But maybe that was too simplistic.

But when packing for the White Rim Trail, we wondered how we’d fit all our water for four days on our bikes — Hilary’s Surly Cross-Check and my custom steel Chocolate Spokes bike. To carry 15 liters of water, we’d need panniers. Which, to me, are “bike touring” bags — as opposed to “bikepacking” bags.

We started down the Shafer Trail, coasting down 1,300 vertical feet in about five miles, then pedaled a few easy miles to the White Rim proper. During our first 20 miles, we were passed in both directions by the following fellow travelers:

I’ll just go ahead and say that a rigid frame and with 43mm knobby tires is probably not the most comfortable way to ride the White Rim Trail. It’s rocky, sandy, and riddled with bumps that are most comfortably experienced with shock-absorbing technology under your butt. On a touring bike loaded with a couple dozen pounds of water, we pedaled in short bursts, steered around rocks, carefully avoided any drops, and, during the infrequent steep climb or descent, got off and pushed. 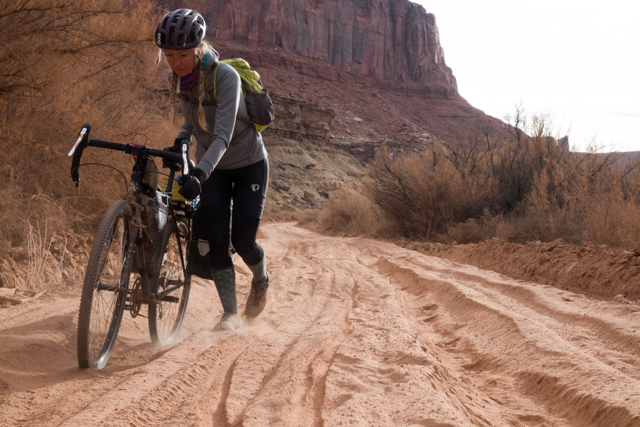 I didn’t track our progress, but rough math had us going an average of 4.5 miles per hour, including breaks to eat and snap photos. Was this bikepacking, or backpacking using bicycles as luggage carts? Not that I was complaining — it was beautiful, the temperature was perfect, and even a slow bike ride is better than walking, in my book. And almost always faster than walking.

On our second day, we encountered a fourth classification of White Rim traveler — a group of semi-self-supported mountain bikers who were riding it in three days, enabled by a pair of friends who hiked in a supply of water to their second-night campsite.

On our third day, around the 65-mile mark, a man with a small backpack hustled down the road toward us, briskly walking and then breaking into a jog. We waved as we passed him, then looked at each other: Was he … ultrarunning the White Rim Trail unsupported?

We pedaled on, our bikes losing weight as we drank water and cooked. I continually checked in on our water supply, doing rough math to estimate whether we’d have enough left for the rest of the miles. The temperature stayed mercifully cool, never rising above 65 degrees, keeping us from losing too much water through sweating. 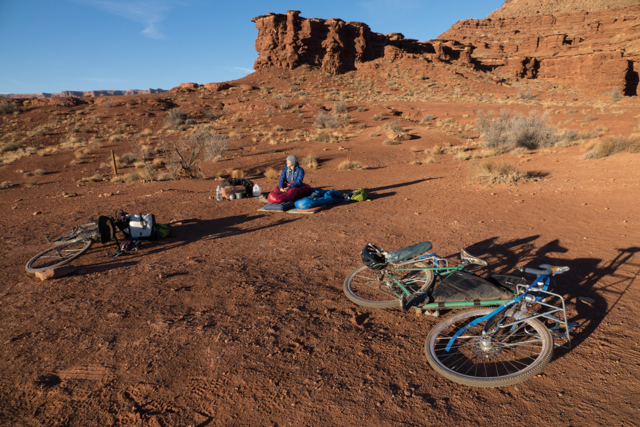 I pushed my bike up the final 850-foot climb zig-zagging up from the Green River, and then we had a mellow, if slightly uphill, 20 miles to the car on a wide, graded dirt road. It was our first time really getting into any sort of consistent pedaling cadence on the whole trip, and with a few ounces left in my water bottle, we turned onto asphalt for the final few miles to the car. And whom should we see but the ultrarunner shuffling toward us on the shoulder. I stopped to chat with him and found out he’d done the entire White Rim Trail in one push, having cached some food and water just below his final climb out, around his 85-mile mark. When we saw him on the road, he had about eight miles left. As we pedaled down the road, I did some rough math and figured he’d finish somewhere around 30 to 36 hours. So much for bikepacking being faster than walking.

Bikepacking has taught me a few things: that you don’t need a four-wheel-drive vehicle to experience Jeep trails; that packing everything into oddly shaped bags that will stay on your bike during even the bumpiest descents is an art; and that pushing your bike is okay.

And after a handful of trips, I’ve had some time to hammer out my personal definition of bikepacking. It’s not necessarily faster than walking. It’s not always on unpaved surfaces, and doesn’t necessarily require a mountain bike or bikepacking-specific bags. The only real, true-to-my-experience definition I have is that it’s just like backpacking, but with coasting. And you don’t have to carry all your stuff on your back, which is nice. And although riding isn’t always faster than just walking, it’s usually more fun. And that’s good enough for me.

Brendan Leonard rode across the Southern Tier in 2007 and his most recent piece for Adventure Cyclist was "Island Hopping in Norway" in the October/November 2015 issue. Read more of his musings at semi-rad.com.