Anatomy of an Event Ride 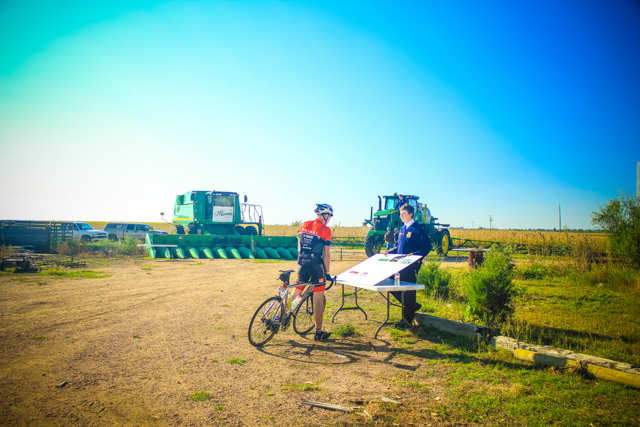 That’s what a friend who lives in Denver said last summer when I told him I was planning to participate in September’s Pedal the Plains. My friend grew up in Iowa (as did I), and he has evolved into a certified mountain nut since relocating to Colorado. He sees no sense in heading to the flatlands to recreate.

“There’s nothing wrong with bicycling in Iowa,” I responded. After all, the 10,000-plus official riders (and many more who ride as unregistered pirates) taking part in the Register’s Annual Great Bike Ride Across Iowa (RAGBRAI) can’t be all wrong. Especially when you consider that nearly two-thirds of them come from out of state — representing all 49 of the non-Iowa states along with a dozen or two foreign countries.

I actually enjoy zipping down roads with corn to my left, corn to my right, and only minor hills to contend with. Pedal the Plains provided just such a setting, taking place as it does in that part of Colorado that’s in Kansas.

Due to an overseas flight coming up the following Monday, my wife Nancy and I, along with my brother Roger from the Denver area, took part only in the Saturday century ride from Fort Morgan to Sterling. It was one of three registration options, the other two being the family ride (a leisurely 5.4-mile spin around Fort Morgan with an aid station placed — where else? — at the John Deere dealership) and the three-day, Friday-through-Sunday ride beginning and ending in Wiggins, with overnights in Fort Morgan and Sterling. 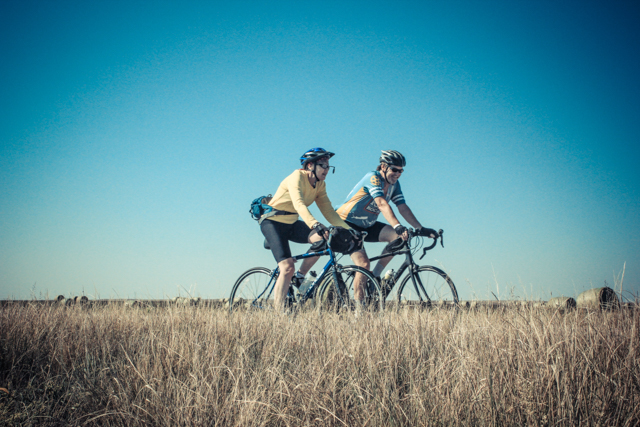 Consequently, we missed Sterling’s 34th annual Sugar Beet Days festival, but we did not miss the Fort Morgan Fall Harvest Car Show participants parading through downtown in their classic Corvettes and Ford convertibles. As we enjoyed supper alfresco at a Main Street eatery on Friday evening before the Saturday ride, American Graffiti came to life before our very eyes. At the other end of the ride on Saturday afternoon, the ice-cold chocolate milk provided by the Colorado Dairy Association was an unforgettable highlight. Then, after watching our bikes be professionally loaded into a Ryder rental truck for their return to Fort Morgan, we jumped aboard a shuttle bus to begin the same trip.

The one-day Pedal the Plains was a fun ride, in an ambience of sky-high spirits and cycling camaraderie; fun enough that I’d like to return to for the full three-dayer sometime. The Brush Area Cultural Center, which hosted food stop number-one, was a fine small-town museum that took a while to get through, and the “raptor stop” out in the country somewhere — a live-bird (big birds!) exhibit presented by the Fort Collins-based Rocky Mountain Raptor Program — was extraordinarily cool. Additional education stops included an irrigation demonstration and another on hydroponic farming. Sporadically along the route, temporary signs had been posted holding brief text blocks (though often not brief enough to read without stopping) that interpreted for riders the Native American, pioneer, and agricultural roots of eastern Colorado.

With so many event rides already circuiting through the spectacular mountainous western two thirds of Colorado, I grew curious about the origins of Pedal the Plains, which, considering the scenery, could have been in Iowa — although the air is considerably drier in eastern Colorado in September than it is in Iowa in July, when RAGBRAI takes place. And, to tell the truth, as far crops go it wasn’t all corn — although I can’t say I noticed any fields supporting Cannabis sativa. That’s not out of the question for future Pedal the Plains riders, given the recent legalization of marijuana in Colorado.

A few weeks after the event I caught up with Liz Brown at the Denver Post. Liz is the event coordinator of both Pedal the Plains and its much older sister event, Ride the Rockies. She’s one of three year-round, full-time staffers who work on the two rides.

Liz told me that Governor John Hickenlooper hatched the idea for Pedal the Plains. After doing so, he got together with Dean Singleton, then-publisher of the Denver Post (he retired late in 2013), which had already been organizing the ultra-popular Ride the Rockies for 25 years. “Compared to most of the hundred or so event tours already running in Colorado, this one would be easier, flatter,” Liz said. Hence the descriptor “a ride for the rest of us,” a phrase coined by Hickenlooper.

The 2014 event was the third annual Pedal the Plains. Participation in the inaugural event in 2012 was strong, Liz explained, then down a bit in 2013. But the numbers were back up in 2014, she said, adding that they would like to see participation continue to grow as the years go by, equaling and eventually surpassing the 2,000 rider cap set for Ride the Rockies.

“It’s great — we don’t have to put a cap on numbers out here in eastern Colorado, because of the roads,” Liz said, meaning that the flatlands are webbed with a greater concentration of highways and byways than the mountains, equaling more ways to get from Point A to Point B — and more options for motorists who want to avoid the cyclists.

I asked Liz about the demographics of Pedal the Plains compared to Ride the Rockies. I guessed that a greater percentage of folks would come from out of state for the latter, since mountains are what Colorado is best known for. That’s true, she said, but not to the extent I’d have thought — and probably even more states will be represented as word about Pedal the Plains continues to spread. 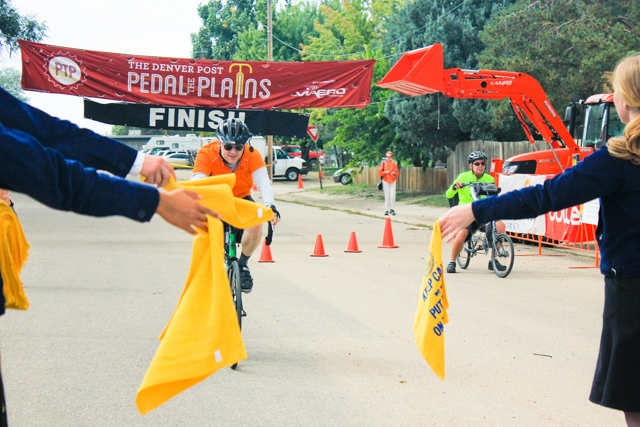 When it comes to feeding hungry cyclists, Liz explained that they take different approaches for the two rides. “For Ride the Rockies, we bring in all our own vendors for meals. Pedal the Plains is much more community-oriented; they bring out the local groups like the Lions Club and churches, and local [commercial] vendors. In 2013, for instance, we added on a loop to visit Rocky Ford farmers and ranchers, who sliced and diced their famous cantaloupe. We also encourage the riders to get out into the communities in the evening for dinner at the local restaurants. The beer garden is organized by community volunteers. We arrange shuttles so that locals — not just riders — can visit the educational opportunities, like the raptor exhibit. It’s a way of thanking the hosts for doing so much work.”

Like RAGBRAI, Ride the Rockies, and a host of other statewide bicycle events, the Pedal the Plains route changes from one year to the next. How is it chosen? “We have a Route Committee that gets together every year to talk about where we’ve been and where we’d like to go,” Liz said. “We ask, ‘What potential host communities can put up 1,500 cyclists, including indoor and outdoor camping, as well as have the footprint for the entertainment venue, and so forth?’ Some communities come to us, which is great — they have to want it to get it. We provide a $2,000 grant for the foundation or organization of choice in each host community, with a ‘jumbo check’ presentation every afternoon of the ride.”

Pedal the Plains also grants $5,000 to Future Farmers of America and 4-H Colorado, “both of which provide many wonderful volunteers,” Liz said. “We’re a nonprofit, so the excess money after grants are made goes into the Denver Post Community Foundation.”

The 2015 route will be announced in April, Liz said, adding that the organizers probably won’t be able to map an entirely different route every year in eastern Colorado. The other side of the coin to plenty of low-traffic rural roads is a limited number of towns large enough to qualify as host communities.

I asked Liz if the organization will make any changes for 2015 based on feedback from 2014 riders. Her response hit home, because Roger, Nancy, and I were surprised and disappointed to find no true lunch served at any of the aid stations on Saturday — only the same snacks at food stop after food stop.

“First of all,” she said, “we really urge people to fill out the post-ride survey, because comments help. The number-one thing we heard after the 2014 ride was that there wasn’t enough food on the century ride. We need to work closer with the host community to make sure they have a real meal at the second or third food stop. If that can’t be arranged, we’ll bring in our own vendor for lunch in the future.”

Indeed, good food and lots of it is important when you’re riding through farm country — or anywhere else, as all traveling cyclists know. With fine-tuning like Liz detailed, Pedal the Plains is bound to only get better and better; its riders, less and less hungry.