By Josh Tack and Mike Deme 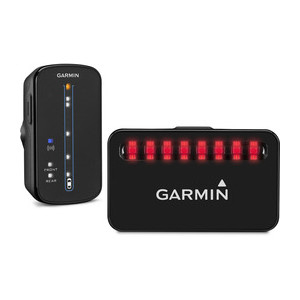 Not a fan of mirrors or constantly checking over your shoulder for traffic? Maybe Garmin’s new Varia Rearview Radar will be up your alley. The system consists of a rear-facing radar that mounts to your seatpost, as well as a stem-mounted display that indicates whether a vehicle is approaching from behind. The radar only detects objects that are closing in on you at a decent clip, so you don’t have to worry about false positives such as parked cars or cyclists riding along at a similar pace.

The display that tells you when vehicles are approaching consists of a bar and sequence of illuminating lights. When a vehicle approaches, a light will show at the bottom of the bar and move upwards as it gets closer. The display can show multiple cars approaching at once, so if there are two lights moving up the bar, there are two cars behind you.

As an added safety feature, the rear facing radar has eight red LED lights. On an empty road, only a couple lights will stay illuminated, however, when a vehicle comes up on you from behind, more lights will illuminate and begin flashing. Some Garmin Edge series cycling computers, such as the Edge 1000 and Edge 520, will sync with the Varia radar, so you can get all your traffic alerts on your regular bike computer screen.

Both the front display and rear radar charge via a USB cable, and provide about five hours of runtime on a full charge.  –JT 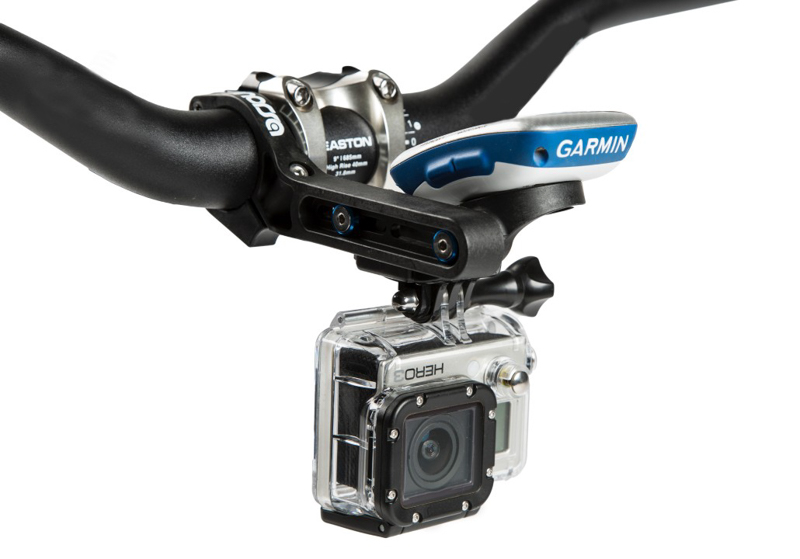 There’s a lot of stuff you can bolt and/or strap to your handlebars. (This holiday gear guide is evidence of that!) To help declutter, consider using the Universal Bike Mount by Morsa Designs. It will take two devices that would normally affix to your bars, and bundle them into one slick package. In my case, I was a big fan of pairing my Garmin Edge 520 and GoPro Hero3 Black edition to a single mount. It cleaned everything up, and made my camera a little less conspicuous.

This modular system centers on a composite Nylon arm that will attach to 31.8mm handlebars. By itself, this is pretty useless, so you’ll want to get started with at least one adapter to mount to the arm. There are four adapters to choose from — one for a camera, cycling computer, phone case, and a universal adapter. The cycling computer option has you covered for any quarter-turn–compatible device, such as the Garmin Edge or Magellan Cyclo series computers. With a camera adapter, you can use any camera that will accept a GoPro buckle clip attachment. The phone mount works with Rokform cases, while the universal adapter is just a knob that will handle anything that would normally strap around your handlebars; such as a light or a bell.

All of the hardware here is rock solid. I took this out on washboard dirt roads, and rocky singletrack with no issues. This is a great solution to decluttering the handlebars and the modular design means you can customize the setup based on your ride or rotating fleet of gadgets.  –JT 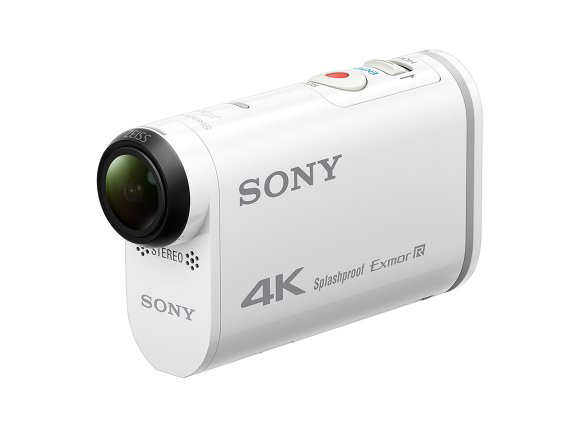 When a big-name company tries to bust into a niche market, it’s easy to have a level of skepticism. For years, the action camera market has been dominated by companies who kept a narrow focus on the segment. That said, after putting Sony’s new X1000 HD camera through it’s paces, I can confidently say that this thing is legit.

With video quality that can reach up to 4K resolution, you can capture some incredibly crisp footage. I found myself bumping down to a more traditional 1080 HD resolution, since the file sizes are more manageable, but it’s nice to know you can go big if you want to. In addition, there are some fun settings for shooting super slow motion video, time lapse photography, and live video streaming with a wifi connection.

The X1000V camera package includes a waterproof case and some adhesive mounts at $499. There’s also a X1000VR package that will get you everything mentioned above, plus Sony’s Live Remote for $599. The live remote straps to your wrist and has a display that shows you what you’re recording and lets you control the shooting functions remotely.

To get this ride ready, you can purchase either a handlebar mount and/or a helmet mount. Controls are intuitive, and the display screen does a nice job helping you toggle through menu options quickly. I was also excited to see that it includes threads on the bottom, so you can mount it to a tripod for off-the-bike shooting.  –JT 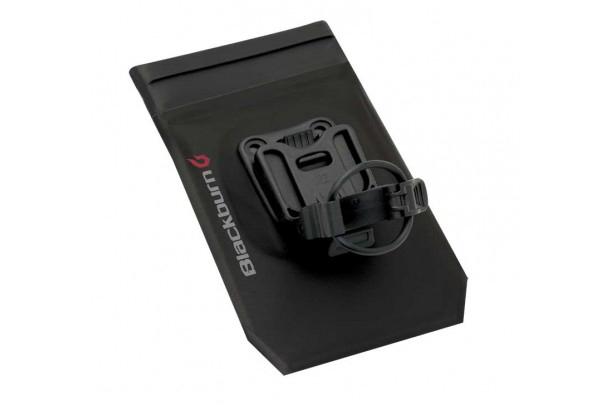 I’ve seen a lot of smartphone mounts over the years, but this is one of the best. It will work with any phone so long as it’s no larger than 3x5 inches, so there’s no need to replace the case if you change phones — a regular issue for me. The clear window is not only touch-screen friendly, but is also seems to be somewhat scratch resistance. It doesn’t create a great deal of additional glare in direct sunlight, and the case seals up for rainy days.

This will mount to your bike’s stem, and I feel most comfortable using it on the road. It did bounce around a bit off-road and the mount is plastic, so you probably don’t want to be too harsh with it. Don’t relegate this to your bike only, it’s a great waterproof case for toting around off the bike as well. Toss some cash in there, and ID, and take it with you anywhere.  –JT 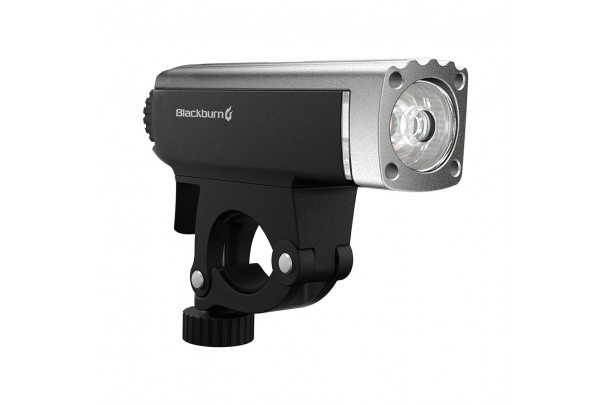 It’s great to see an improvement with bike lights that isn’t just increasing the lumen output. The Blackburn Central Front Smart Light boasts a wide range of 18-500 lumens, but more importantly, it can auto adjust to changing conditions of darkness. This is awesome for those dawn and dusk rides to and from work, or the early morning miles that I avoid like the plague.

While the smart light function is really cool, you’re not limited to it. You can also run the light at high, low, or blinking settings. Other key features include USB rechargeable battery, illuminated battery life indicator, and an easy-to-use tool-free mount. On a full charge you can get about an hour and a half of battery life at the brightest light setting. If you’re using this for commuting purposes, that’s more than enough, considering you can just plug it into your computer during the day to recharge.  –JT 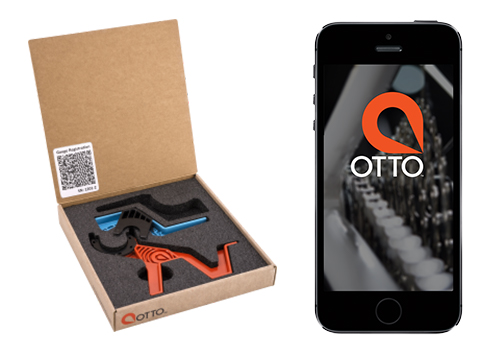 If you’ve got a minute, that’s plenty of time to dial in your bike’s shifting with the OTTO Tuning System. Using a pair of plastic gauges and an iPhone, the OTTO Tuning app uses your phone’s camera to lock onto various targets along the gauges, and will use voice instructions to tell you if you need to make adjustments to your rear derailer. You can either set this up for limit screw adjustments or barrel screw adjustments. At the time of writing, there’s a set of gauges available for Shimano/SRAM 10/11-speed cassettes, as well as another set for Shimano 9-speed cassettes.

Even if you’re already an accomplished mechanic who can quickly assess derailer issues, this is a handy way to check your bike’s rear shifting without tossing it into a work stand. The $39 price will only get you the tuning gauges and access to basic functions within the app. If you want to make full barrel and limit screw adjustments, you’ll have to make some in-app purchases. You can either buy a single tuneup for $0.99, or grab a full year’s subscription for $29.99.  –JT 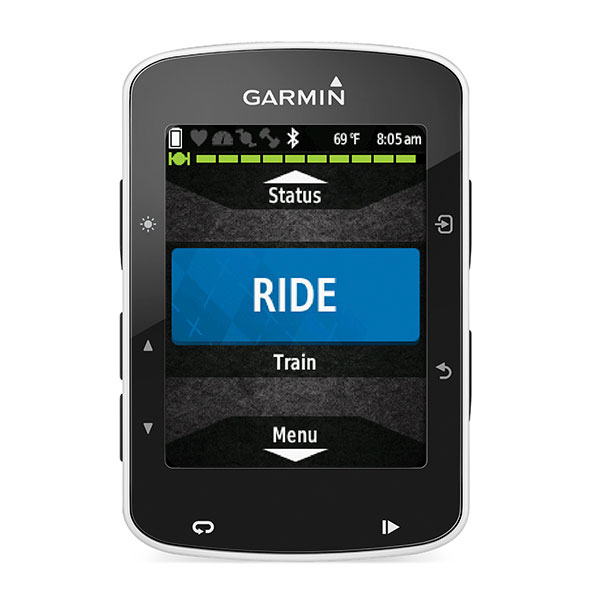 Garmin’s new Edge 520 GPS bike computer packs a lot of punch in a small package. Despite it’s size, you still get a 1.4-inch x 1.9-inch display that is crystal clear and easy to read from the saddle. While it’s not a touch-screen monitor, the buttons are well labeled, easy to access, and organized for intuitive use.

The Edge 520 offers features for just about any rider. If you want to push yourself, you can set training goals or upload live Strava segments to test yourself against other riders over various sections of road or trail. For adventurous riders, you’ve got 15 hours of battery life on a full charge that allows to lose yourself on the bike, and review where you went afterward. This device is also fully compatible with ANT+ sensors, meaning you can pair it to compatible cadence and heart rate monitors, power meters and Garmin’s VIRB action camera and Varia radar and smart lights. You can even pair the Edge 520 to Shimano’s electronic Di2 shifting systems to view what gear you’re in at any given time.

Unfortunately this will not plan routes for you like the Edge Touring, but you can load .GPX files to the device and follow them on the map view screen. Two mounts, and a USB cable are included. 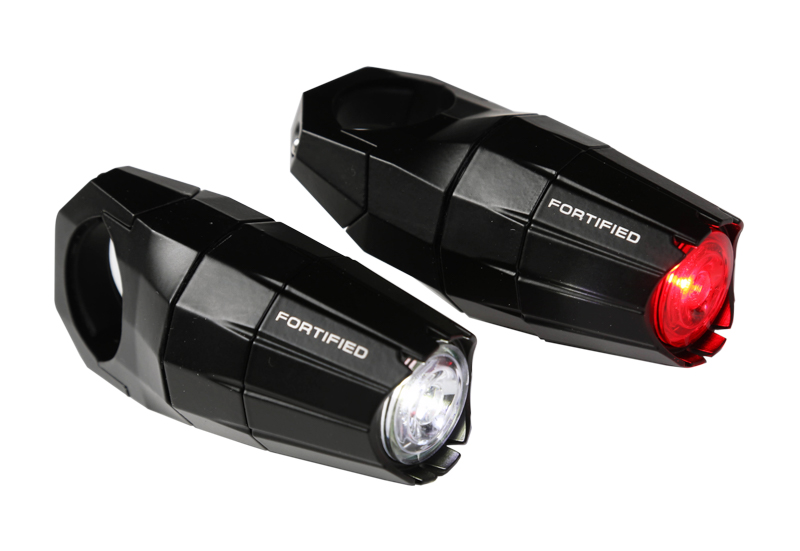 Fortified has come up with a set of lights that are very well thought out and designed to be nearly theft proof, using a unique system for attaching them to you bike so that they cannot be easily removed. Each light clamps to your handlebar or seatpost and is meant to stay on your bicycle not be removed with each use.

When I first mounted the lights, the process seemed a bit odd but the system is actually very clever and effective and the functionality becomes obvious. Once the lights are mounted, you twist the inner ring clockwise and the light's body opens like a hatch with both pieces remaining attached to one another revealing the removable battery, which is what gets charged via micro USB. Confused? If so, you can watch a video that shows the system better than I can describe it here [LINK: youtube.com/watch?v=-DmquIi6XFo]. Fortified's FAQ is also very informative.

Now that you've been shown the light (wink), I can get on with it. The lights are made of lightweight Aluminum and weigh 4.1 oz. (Aviator) and 4.4 oz. (Afterburner). Dimensions are 4.2 x 1.9 x 1.7 in. and the Aviator fits handlebars between 22mm and 31.8mm and the Afterburner fits seatposts of 22mm to 31.6mm. The battery is USB rechargeable removable Li-ion with runtime of up to 5 hours (Aviator) and 24 hours (Afterburner). Modes are boost (300 lumens Aviator/60 lumens Afterburner), steady (150 lumens Aviator/30 lumens Afterburner), flash, and eco-flash. The cool thing about the removable battery is that you can carry an extra giving you twice the burn time.

One thing of note: at the upper end of the handlebar size limit, you may need to use an extender. My 31.8mm handlebar gets even larger at the center, closer to 35mm. Since this was the only place I could mount the Aviator, I used a handlebar extender.  –MD