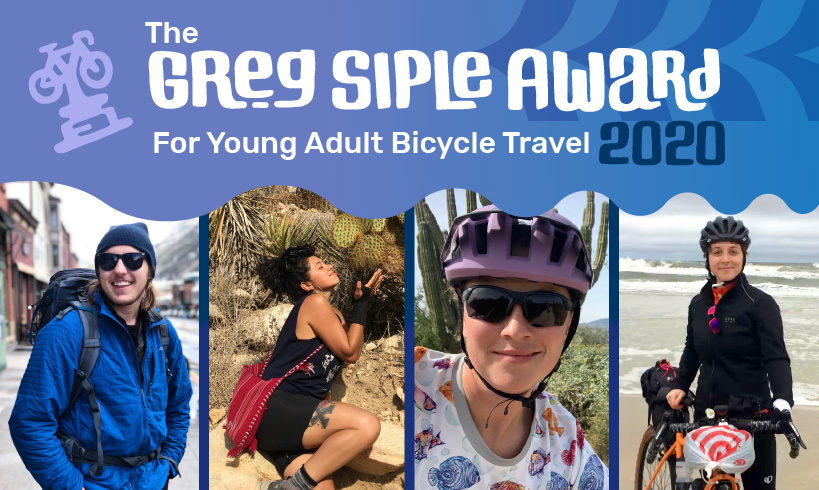 The Greg Siple Award covers the cost of attending an Adventure Cycling educational course and provides the winners with bike touring gear. In return, each recipient will perform an outreach project to promote bicycle touring to underrepresented communities. Applicants proposed their projects in written applications, and 10 finalists in each award category were asked to make short videos about their projects.

Now in its seventh year, the Greg Siple Award was developed to introduce more young people to bicycle travel. The award is named in honor of Adventure Cycling’s cofounder and longtime art director Greg Siple, who discovered bike touring as a young adult and inspired generations of people to travel by bike.

Keys and Lopez Marchena were chosen from 44 applicants for the Intro to Bike Touring award. They will learn more about the logistics of bike travel by taking one of Adventure Cycling’s Intro to Road Touring courses. Keys and Lopez Marchena will be outfitted with new Surly touring bicycles and other gear courtesy of Big Agnes, Arkel, and Bedrock Sandals. Their new bikes will be shipped to and from the educational course thanks to BikeFlights.com.

Keys and Lopez Marchena will open the world of bike travel to underrepresented communities, including LGBTQ+, women of color, and youth. Keys will host conversations with high school and college LGBTQ+ groups about bike touring while trans. “Adventures are fully accessible,” Keys wrote in his application. “They shouldn’t see cycling for its neon skinsuits and fancy components, rather for its community of folks who love living life on a bike.” Keys also hopes to partner with Venture Out Project to help expand their programming to include bike touring.

Pauli and Wollmann were chosen among 34 applicants for the Outdoor Leadership Award, intended for young adults who want to get more involved in outdoor leadership. Both will complete an Adventure Cycling Leadership Training Course, with bike shipments covered by BikeFlights.com. They will then put their new skills to the test when they go on an Adventure Cycling self-contained tour. They also received Bedrock Sandals and a $100 gift certificate to Adventure Cycling’s Cyclosource store to update their gear.

Pauli will create an annual event called Pride Packing that will include workshops, information, and resources for LGBTQ+ people to access in person and online. Pauli’s resources will include information about safety, selecting a bike, affordability, and creating community agreements. “Through this project, I want to identify opportunities for LGBTQ Montanans to experience the sense of freedom that traveling by bike gives me," Pauli says. "I want to create space for queer folks to be their most authentic selves.”

Working with the Washington Area Bicycle Association, Wollmann will host potlucks to introduce nonbinary and trans people to bikepacking through “food, good conversation, and an inclusive and inviting atmosphere.” Wollmann wrote in their application: “By advocating that there is no ‘right way’ to look like a cyclist, we can eliminate the gatekeeping that impacts people’s engagement in the community, especially for people of color and those outside of the cis-hetero-binary norm.”

Donations to the Greg Siple Award for Young Adult Bicycle Travel can be made on Adventure Cycling’s website.

Special thanks to the following sponsors who are generously outfitting the 2020 award winners: Surly, Arkel, Big Agnes, BikeFlights.com, and Bedrock Sandals. New Belgium Brewing, the Seay Foundation, and the Henry Family Foundation also supported the Greg Siple Award in 2020.

Contact us for photos or to arrange interviews with the winners.