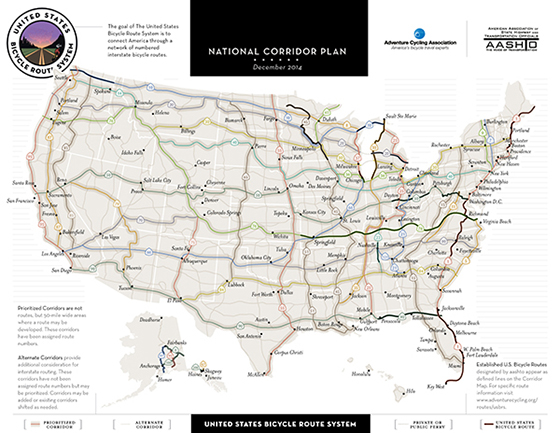 Missoula, Montana, December 16, 2014 — Adventure Cycling Association and the American Association of State Highway and Transportation Officials (AASHTO) today announced that AASHTO’s Special Committee on U.S. Route Numbering has approved 1,253 miles of new U.S. Bicycle Routes (USBRs): USBR 1 in Massachusetts and Florida, USBR 10 in Michigan, USBR 11 in Maryland, and USBR 90 in Florida. Realignments were also approved for USBR 76 and USBR 1 in Virginia, which were originally designated in 1982. The U.S. Bicycle Route System (USBRS) now encompasses 8,042 miles of routes in 16 states and the District of Columbia.

“We continue to be impressed by the strong work of state Departments of Transportation and congratulate them on their designations,” said AASHTO Executive Director Bud Wright. “We also wish to acknowledge our partnership with Adventure Cycling Association and the expertise they bring to the process.”

“With each new route and each new state in the U.S. Bicycle Route System, we will soon see this network reach every corner of America, from urban to rural areas” said Jim Sayer, executive director of Adventure Cycling Association. “Given the project’s momentum, we expect that, over time, the USBRS will become the largest official bicycle route network on the planet.”

U.S. Bicycle Route 1 follows Florida’s Atlantic coast from Key West to Jacksonville, where it ends at the Georgia State Line. Much of USBR 1 follows the East Coast Greenway and Adventure Cycling Association’s Atlantic Coast Route. The route includes many scenic beaches and intersects cities and towns along the way.

Florida Department of Transportation Secretary Ananth Prasad commented, "We're very pleased that Florida now joins other states in establishing U.S. Bicycle Routes. Milepost 0 in Key West will now be the starting point for U.S. Bicycle Route 1 as it is for U.S. Highway 1. The Sunshine State invites cyclists to enjoy our great state."

Florida DOT Secretary Ananth Prasad said, "cyclists can now follow USBR 90 across Florida from the coast to Alabama. We'll guarantee to keep the route free from snow year-round and provide plenty of sunshine."

Bicyclists interested in riding U.S. Bicycle Routes in Florida can find maps, turn-by-turn directions and other information at http://www.dot.state.fl.us/planning/policy/usbr.

US Bicycle Route 11 runs for 34 miles from the Pennsylvania state line northwest of Hagerstown to Harpers Ferry, West Virginia. There are a variety of urban and scenic attractions along the route, which follows a combination of rural roads, state highways and off-road trails. Cyclists can stop in downtown Hagerstown and explore its historical and art museums located in the picturesque Hagerstown City Park. For bicycle travelers interested in civil war history, there are many historical attractions along or near the route, including the National War Correspondents Memorial in Gathland State Park, the Antietam National Battlefield, and Harpers Ferry National Historical Park. USBR 11 also traverses the traffic-free, scenic Chesapeake and Ohio Canal Towpath (also designated as U.S. Bicycle Route 50) for 2.6 miles until it reaches Harpers Ferry.

“US Bicycle Route 11 will be a great asset for bicyclists and Washington County businesses,” said Richard Cushwa, Acting Chair of the Maryland Bicycle and Pedestrian Advisory Committee. “By connecting with U.S. Bicycle Route 50, this designation will help enhance safety, travel, and tourism throughout Western Maryland and beyond.”

For more information on bicycling in Maryland, visit the Maryland Department of Transportation Bicycle and Pedestrian site.

The more northerly segment of USBR 1 in Salisbury and Newburyport straddles the majestic Merrimack River. USBR 1 here offers views of watercraft and reminders of the area’s rich nautical history. While the Salisbury Old Eastern Marsh Trail provides proximity to expansive Atlantic Ocean beaches, Newburyport’s Clipper City Rail Trail reminds riders that the City’s clipper ships were once the fastest on the seas, spawning a global maritime trade. Both communities also offer nature preserves and museums in close proximity to USBR 1.

Further south, USBR 1 traverses through the communities of Topsfield, Wenham, Danvers, and Peabody, which are removed from the Atlantic and offer a different experience of Massachusetts. The Topsfield Linear Common and Wenham Swamp Walk wind their way through these communities, and riders are treated to a number of river crossings. Wetlands remind cyclists of glacial epochs long past, and boardwalks provide opportunities to explore these landscapes and natural history. Timeless town centers and deep woods also attract riders. Further south, USBR 1 enters busier settlements via the Danvers Rail Trail and Independence Greenway where cyclists can buy needed provisions.

U.S Bicycle Route 10 stretches for 193 miles along U.S. 2 and connects the eastern and central portions of Michigan’s Upper Peninsula. The eastern terminus connects with U.S. Bicycle Route 35 in St. Ignace. As the route travels west to Iron Mountain, Michigan, travelers are presented with stunning views of the Mackinac Bridge, rolling sand dunes along Lake Michigan, and tourist attractions like the famous Mystery Spot. The gently rolling route passes numerous parks, state and national forest lands, and scenic overlooks. Along the way, small lumber towns and rural communities offer everything a bicycle traveler could need every 20 to 30 miles.

A recent study initiated by the Michigan Department of Transportation showed that bicycling brings $668 million per year in economic benefits to Michigan's economy. The state’s third U.S. Bicycle Route designation, USBR 10 will bring bicycle tourism revenue and new economic growth opportunities to Michigan's Upper Peninsula. The designation is also part of a regional effort to complete U.S. Bicycle Routes around Lake Michigan and market the area as an active tourism destination.

Kerry Irons, a USBRS coordinator for Adventure Cycling based in Michigan, noted that “with the addition of USBR 10, Michigan is now tied with Florida for second place among states for USBR mileage (1,008 miles), with Alaska having the highest mileage (1,414 miles). We're looking forward to the connection of USBR 37 to Wisconsin and the completion of USBRs all the way around Lake Michigan."

The Virginia Department of Transportation has realigned U.S. Bicycle Route 1 in Northern Virginia to provide a safer and more reliable route for cyclists. Increased traffic volumes, changes to access through Ft. Belvoir, and the closure of a bridge on Gunston Cove Rd were all factors which triggered a re-evaluation of the existing route. The realignment improved the scenic appeal of the route by adding more mileage along the Potomac River.

The Virginia Department of Transportation (VDOT) has realigned U.S. Bicycle Route 76 in the Staunton District to provide a safer, more direct route for cyclists. The route was realigned just north of Lexington to Route 56 near Vesuvius and matches the existing Adventure Cycling TransAmerica Trail route. The new route follows roads with lower-volume traffic and avoids two interstate interchanges.

This section of USBR 76 passes through the historic city of Lexington, home of the Virginia Military Institute and Washington and Lee University. For eastbound cyclists, this section of USBR 76 is the last part of the route in the Shenandoah Valley and skirts the western foot of the Blue Ridge Mountains. The northern end of the realignment ends at Route 56 which then quickly climbs 2000 feet over four miles to the Blue Ridge Parkway. The 17-mile section of the Blue Ridge Parkway offers numerous scenic views and is consistently noted as one of the highlights of the TransAmerica Trail by cross country cyclists. Maps of the TransAmerica Trail are available at Adventure Cycling and more information about the USBR 76 route changes is available on the VDOT website.

AASHTO's support for the project is crucial to earning the support of federal and state agencies. AASHTO is a nonprofit, nonpartisan association representing highway and transportation departments in all 50 states, the District of Columbia, and Puerto Rico. A powerful voice in the transportation sector, AASHTO's primary goal is to foster the development of an integrated national transportation system.