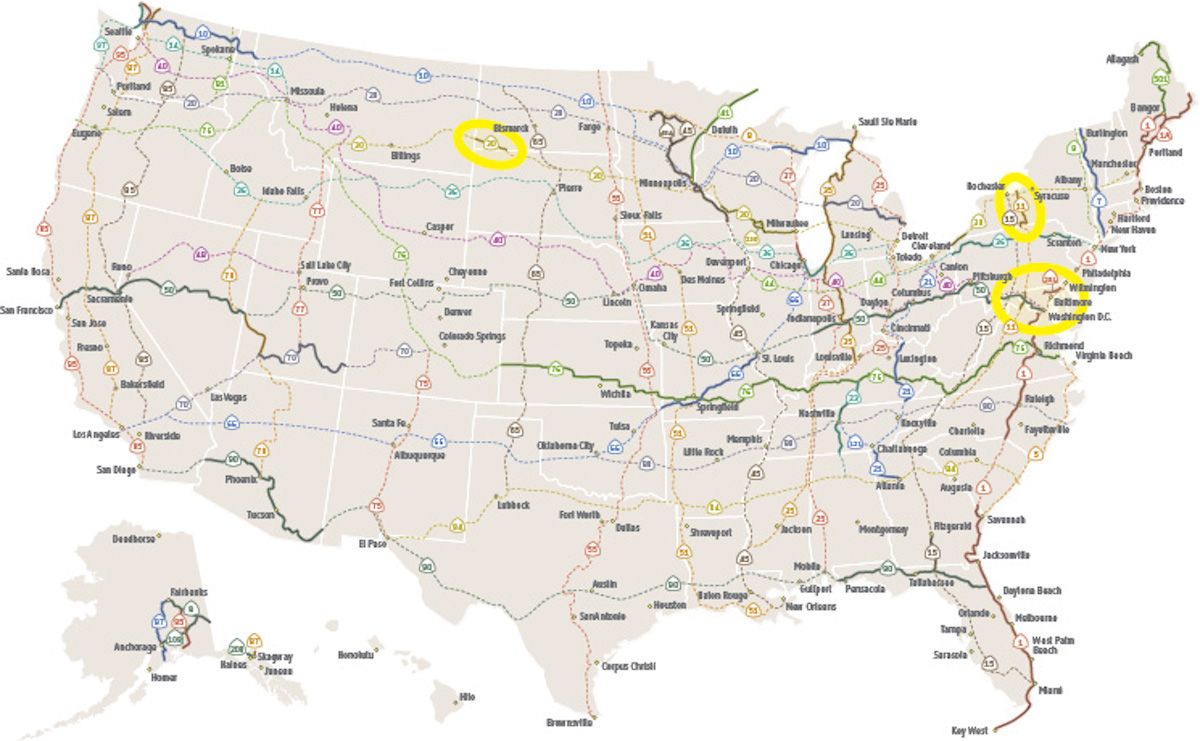 In Maryland, USBR 201 shares routing with the East Coast Greenway on-road routing. In New York, the north-south USBR 11 travels from the shore of Lake Ontario, crosses the Erie Canalway in Lyons, then ends at the border with Pennsylvania. In North Dakota, USBR 30 takes riders across country where the wildlife outnumber people on U.S. 12. In Washington, DC, USBR 1 follows Capital Crescent and Rock Creek Trails along the Potomac River. In West Virginia, USBR 11 captures Appalachian farm country and history while connecting to existing USBRs in Maryland.

“Interest in bicycling has grown in recent years, and especially in recent months as the coronavirus pandemic has prompted many people to turn to bicycling for daily commuting, recreation, and tourism,” said Jim Tymon, American Association of State Highway and Transportation Officials (AASHTO) executive director. “The expanding USBRS network is an important contribution to the nation’s transportation system.”

The USBRS is a developing national network of officially recognized, numbered, and signed bicycle routes. All U.S. Bicycle Routes are designated by AASHTO. With the new designations, the USBRS now boasts 14,841 miles of routes in 31 states and Washington, DC. Nearly 40 states have or are currently developing U.S. Bicycle Routes.

Digital maps for all designated U.S. Bicycle Routes are available to the public for free, thanks to a partnership with Ride with GPS, from the Adventure Cycling website.

Adventure Cycling Association, a nonprofit organization that provides national coordination for the U.S. Bicycle Route System, partners with AASHTO to ensure states have the resources and expertise needed for successful route designation.

The Mason-Dixon line, which most people think of as the dividing line between Maryland and Pennsylvania, also takes a 90 degree turn to divide Maryland from Delaware. This is where the 62.5-mile USBR 201 begins. The route showcases the historic centers of several northeast Maryland towns. USBR 201 uses the current on-road route along rural and suburban roads of the East Coast Greenway, parallel to the Greenway’s planned off-road route. The USBR 201 and East Coast Greenway promote bicycling tourism in Maryland while offering the community connections to shopping, dining, and parks.

“Designation of USBR 201 will promote bicycle tourism in Cecil County, inviting travelers to explore the County’s historic towns, unique shops and restaurants, and scenic views. Through our planning in Cecil County, including the Cecil County Bicycle Plan, Wilmington Area Planning Council (WILMAPCO) has also documented a local demand for bicycle routes that provide transportation and recreational benefits such as this route,” said Heather Dunigan, principal planner with WILMAPCO.

The first town encountered is Elkton, which was once dubbed “the elopement capital of the East Coast.” Even celebrities such as Debbie Reynolds and Willie Mays flocked there to get hitched. When traveling through Perryville, be sure to stop in at Rogers Tavern where George Washington visited a number of times in his travels up and down the East Coast.

Crossing the Susquehanna River from Perryville to Havre de Grace, you parallel the path of the Philadelphia, Wilmington and Baltimore Railroad Company (PW&B), which is no longer running. Frederick Douglass traveled the PW&B to escape slavery in Baltimore to freedom in Philadelphia. The piers of the railroad bridge are still in the river but will be removed when Amtrak remodels its cross-river bridge. The historic town of Havre de Grace was one tie-breaking vote short from becoming our nation’s capital instead of Washington, DC.

At Bel Air, you near the Liriodendron Mansion, which was the summer home of one of the four founding physicians of the Johns Hopkins Medical College, Dr. Howard Kelly. At Monkton, the western terminus of USBR 201, the route is close to the NCRR (The Torrey C. Brown Trail), which was the railroad line that brought President Lincoln to Gettysburg for his famous Civil War address.

In total, USBR 11 is a long-distance bicycle touring route from western North Carolina at the Blue Ridge Parkway through Virginia, West Virginia, Maryland, and Pennsylvania to New York State at Lake Ontario. The New York State section of USBR 11, codesignated with Bicycle Route 14 (NYBR 14), is 118.8 miles. From Lake Ontario to the farmland and forests of the New York-Pennsylvania border, USBR 11 uses well-maintained New York State Highway (NY 14) with its 5- to 10-foot paved shoulder along its entire length.

Bicyclists can access USBR 11 at its northern end by traveling to Rochester, New York, via Amtrak or intercity bus. All Amtrak trains stopping at Rochester have bicycle racks in either the passenger coaches or in a baggage car. No need to box or bag a bicycle. From Rochester’s Amtrak station, it is a 40-mile bicycle ride along the Lake Ontario shore to Sodus Point.

For the first 16 miles traveling south on USBR 11/NYBR 14, the bicyclist is surrounded by fruit orchards and farms before reaching the Erie Canal and Erie Canalway/Empire State Trail at Lyons. Like most villages along USBR 11, it has many 19th century buildings and churches with unique architecture as well as a grocery store and a restored movie theater showing films or live performances.

After traversing low rolling hills (drumlins), a bicyclist enters Geneva at the northern end of Seneca Lake, one of the state’s 11 Finger Lakes. Geneva has vibrant culinary, music, and nightlife scenes befitting a city with a respected liberal arts college and a State Agricultural Research facility. Eleven miles east of Geneva is the Women’s Rights National Park in Seneca Falls.

Along USBR 11’s 35-mile route overlooking Seneca Lake, a bicyclist will pass more than 35 wineries and many lodging options. Finding a spot to jump into the lake to cool off or throw a fishing line into the water is not hard. At Seneca Lake’s southern end is the magnificent Watkins Glen State Park and International Gran Prix automobile racing track. As befits a village with such attractions, there are many lodging options and restaurants in Watkins Glen.

At mile 90 in Elmira is author Mark Twain’s study on the Elmira College campus. Elmira’s Arnot Art Museum specializes in American art. USBR 11 detaches from NYBR 14 in Elmira and routes through Corning with its noted Corning Museum of Glass, Rockwell Museum (American and Native American art), and Gaffer District with restaurants and stores.

Once again USBR 11 turns toward the Pennsylvania border outside of Corning using NY Hwy 417 and Steuben County Road 115 to go through Lindley, New York, and to Lawrenceville, Pennsylvania, where it begins to use PABR G.

Traveling USBR 11 is a wonderful 118.8-mile ride in an area of the U.S. rarely traveled by long-distance bicycle tourists. This is just an inkling of what the bicyclist can expect along this bicycle-friendly, scenic, historic, and attractive route.

The North Dakota Department of Transportation submitted its first of five proposed bike routes for the USBRS. These routes were identified in the ND Moves Active and Public Transportation Plan and will enhance the state’s transportation system.

USBR 30 follows U.S. Highway 12 through the southwest portion of North Dakota, which consists of prairie grasses and fields of corn, wheat, and sunflower. This route was known as the Yellowstone Trail when it was the first transcontinental automobile highway in the U.S. through the northern tier of states from Massachusetts to Washington. The Dakota Buttes Museum in Hettinger contains interesting Yellowstone Trail artifacts and exhibits. Hettinger, along with Scranton and Bowman, are three of the small towns along this route that offer various local attractions, eateries, and hotel accommodations for travelers.

Although the route is only 87.5 miles, it travels through three North Dakota counties where prairie dogs, elk, antelope, deer, eagles, and falcons outnumber the almost 6,000 people, giving the three counties USBR 30 travels through an average of 1.9 people per square mile. The route has limited shoulders, but when coupled with the very low daily traffic, it is truly a road less traveled. It enters North Dakota on U.S. 12 from South Dakota at an elevation of 2,480 feet, and the terrain slowly climbs to a maximum elevation of approximately 3,225 feet by Rhame, about 40 miles from White Butte, the highest point of North Dakota at 3,506 feet.

The Washington, DC, portion of USBR 1 traverses seven miles of scenic Potomac riverfront along the Capital Crescent and Rock Creek Trails. Perched above the parallel C&O Canal, the Capital Crescent Trail portion begins in Maryland and ends in Georgetown. This rail trail was built upon the former railbed of the Georgetown Branch of the B&O Railroad and was developed as a component of the C&O National Historical Park.

In Georgetown, the route continues in separated bike lanes along Georgetown Waterfront Park before linking to the Rock Creek Trail. Here riders are treated to spectacular views of Theodore Roosevelt Island and the Kennedy Center for Performing Arts. After going under the Theodore Roosevelt Bridge, the route circles the Lincoln Memorial before crossing the Potomac River on the Arlington Memorial Bridge into Virginia. Before heading south along the Mount Vernon Trail, riders are treated to a view of the grand entrance to Arlington National Cemetery.

“The designation of USBR 1 in Washington, DC, creates a critical link in the long-distance cycling route between Florida and Maine. The DC section connects to two of the city’s most popular trails, the Capital Crescent and Rock Creek trails, which allow cyclists to access the C&O Canal, Georgetown, the National Mall and monuments, or venture farther out to the many fine restaurants and neighborhoods in our nation’s capital city,” said Jeff Marootian, Director of the District Department of Transportation (DDOT).

Riders will experience the pastoral beauty of northern Appalachian farm country along its southern portions, where gentle rolling terrain provides a good workout while allowing for an enjoyable experience for riders of differing abilities.

“We’re so excited to have USBR11 designated in West Virginia. The input we received from the local riding community and the public helped ensure designating the best route to show long-distance riders the beauty of Jefferson County,“ said Matt Mullenax, Executive Director of the Hagerstown/Eastern Panhandle Metropolitan Planning Organization.

A cyclist will begin the 17.7-mile USBR 11 by walking their bicycle across the Goodloe Byron Memorial Bridge from Maryland’s USBR 50 into historic Harpers Ferry. Cyclists will strike out westward following the Potomac River on the Armory Canal Trail and Potomac St. While the Armory Canal Trail is currently unimproved with a rough gravel surface, it is accessible by bicycle with short sections of walking required and is under design for an improvement project anticipated to be completed in the early 2020s.

From Harpers Ferry, the route leaves the riverfront for a ride past the Schoolhouse Ridge Park before rejoining a water feature, this time the Shenandoah River, taking in gorgeous views of the river valley and providing connectivity to parks and river access points along the way. At Mechanicstown, a short detour to the northwest offers cyclists the historic charm and business districts of Charles Town and Ranson. Here riders can try their luck at the local casino and horse track before returning to USBR 11 for the final 10.3 miles to Virginia.