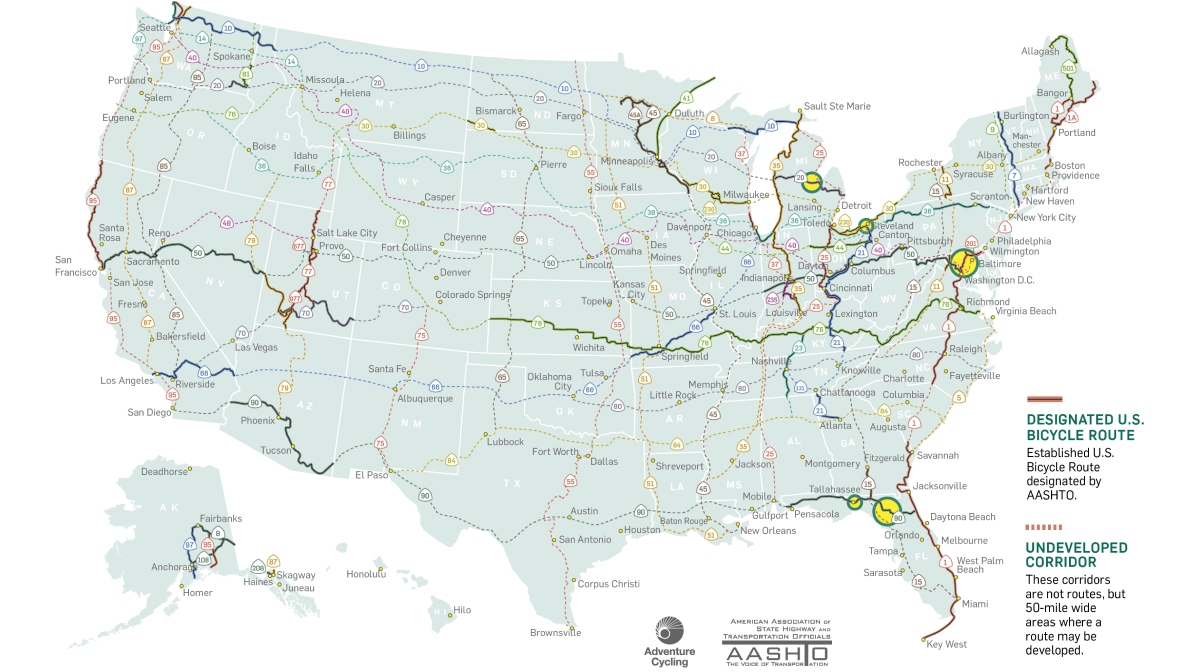 MISSOULA, Mont. (Dec. 6, 2021) – Adventure Cycling Association is proud to announce the designation of U.S. Bicycle Route 1 in Maryland and the realignment of additional routes through Florida, Michigan, and Ohio, adding nearly 150 miles to the U.S. Bicycle Route System and improving connectivity and the cycling experience.

The addition of USBR 1 in Maryland extends the overall length of the route by connecting it to additional segments that exist in Washington, DC, Virginia, and North Carolina. Segments of USBR 1 also exist in Maine, New Hampshire, and Massachusetts to the north, and Georgia and Florida to the south. The realignment of routes through Florida, Michigan, and Ohio were made based on feedback from cyclists and local communities, as well as the completion of infrastructure improvements and other projects.

“One of the most exciting things that we see happening across the country are the partnerships that form around this initiative to grow and strengthen the U.S. Bicycle Route System,” said Jim Tymon, Executive Director of the American Association of State Highway and Transportation Officials (AASHTO). “Working together with communities and cyclists, state departments of transportation are finding ways to improve existing routes while adding new ones every year.”

The USBRS is a developing national network of officially designated, numbered, and signed routes that use existing roads, trails, and other facilities appropriate for bike travel. The USBRS will eventually encompass 50,000 miles of routes and open new opportunities for cross-country travel, regional touring, and commuting by bike. The USBRS benefits communities by providing new bicycle routes, enhancing safety, and increasing tourism and economic activity.

U.S. Bicycle Routes are developed by state departments of transportation and officially designated by AASHTO. With the new designation and realignments, the USBRS now boasts 17,873 miles of routes in 31 states and Washington, DC. At least 40 states are currently developing additional U.S. Bicycle Routes.

Digital maps for all designated U.S. Bicycle Routes are available to the public for free on the Adventure Cycling Association website.

“It’s always exciting to see the U.S. Bicycle Route System grow with the addition of new routes like USBR 1 in Maryland,” said Jennifer O’Dell, Executive Director of Adventure Cycling. “Equally as important, though, is the realignment of existing routes in the system as they increase access to amenities and make the cycling experience safer and more enjoyable. As we continue to map out the USBRS, we commend the efforts of our state department of transportation partners to bring the benefits of bike travel to their communities.”

Highlights of the newly designated and realigned USBRS routes include:

USBR 1 (94.2 miles): USBR 1 connects with the existing segment of the route in Washington, DC, and extends it north to the Pennsylvania border. From the outskirts of Washington, DC, the route travels north on the Capital Crescent Trail through Bethesda, follows Rock Creek, turns northeast and passes Triadelphia and Liberty Reservoirs, then ends along Big Gunpowder Falls and the Torrey C. Brown Trail. Link to map.

USBR 90: USBR 90 travels east from the Alabama border near Pensacola through Tallahassee to the Atlantic Coast near St. Augustine. The realignment moves a portion of the route off U.S. Highway 90 between Palatka and Tallahassee, instead using the Palatka-Lake Butler State Trail, Gainesville-Hawthorne State Park Trail, O’Leno to Ichetucknee Trail, Capital Cascades Trail and Tallahassee-Saint Marks Historic Railroad State Trail. Link to map.

USBR 20: USBR 20 follows the St. Clair River north from Marine City, turns northwest and crosses the Thumb to Bay City, continues on the Pere Marquette Rail Trail between Midland and Clare, climbs to the Muskegon River and the woods of the Huron-Manistee National Forests, and descends to Ludington, on the shore of Lake Superior. The realignment uses separated paths and wider paved shoulders between Bay City and Midland. Link to map.

USBR 21: USBR 21, which was designated in the summer of 2021, follows the Ohio to Erie Trail south and southwest from Cleveland through Akron, Massillon, and Columbus to Cincinnati, then continues southeast along the Ohio River to Aberdeen. The realignment uses new segments of the Ohio & Erie Canal Towpath Trail in the Ohio City and Tremont neighborhoods of Cleveland. Link to map.

Download a USBRS fact sheet and find other USBRS resources