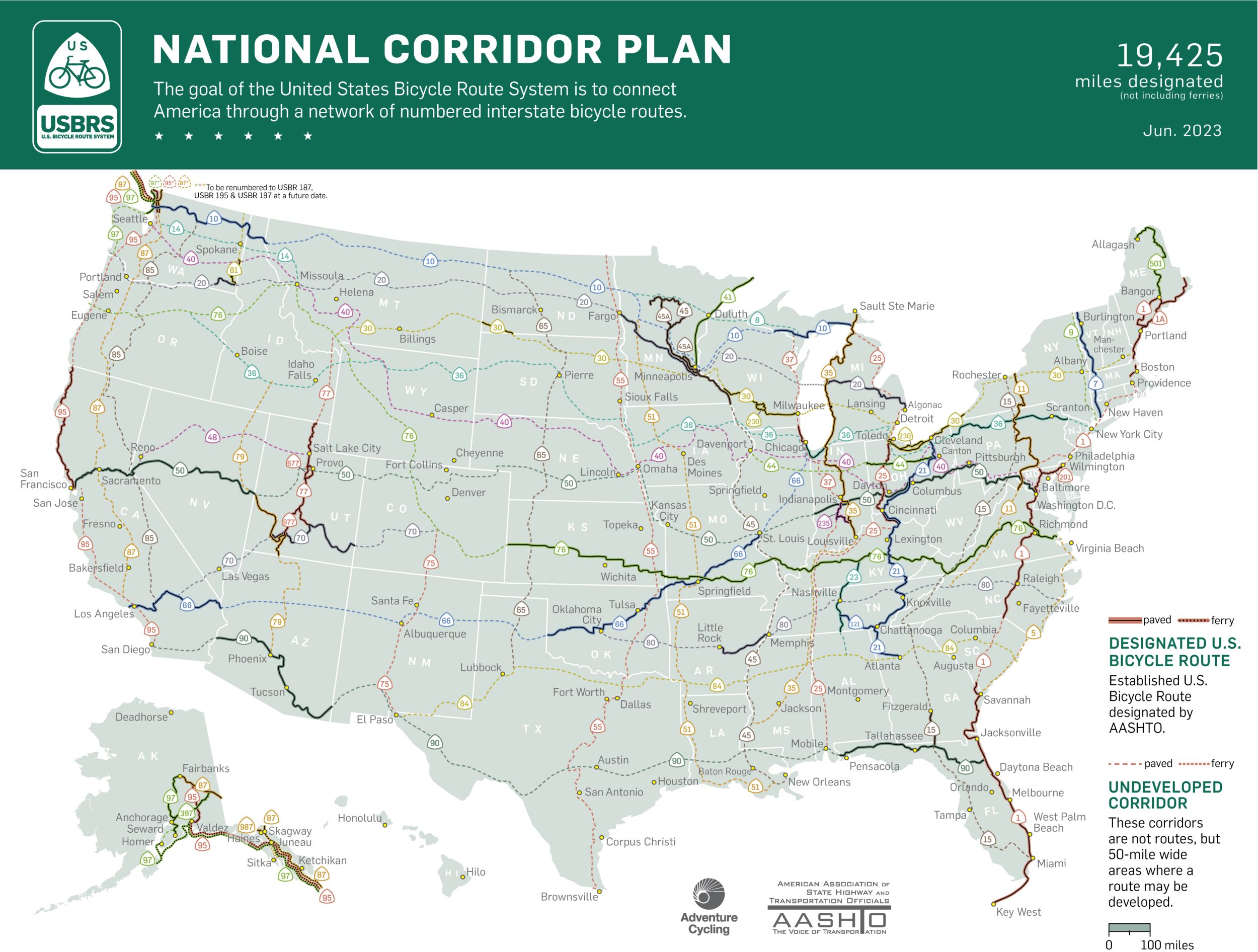 The USBRS expands to include Nevada, with additional new routes designated in Missouri, Kansas, Pennsylvania, and Georgia, following the May meeting of the American Association of State Highway and Transportation Officials (AASHTO).

MISSOULA, MONT., June 12, 2018 — With the designation of USBR 50, Nevada becomes the 26th state to join the U.S. Bicycle Route System (USBRS). Missouri and Kansas joined forces to designate USBR 66, becoming the first states to officially designate the historic “Mother Road” for bicycling. In Pennsylvania, two new U.S. Bicycle Routes - USBR 30 and USBR 36 - connect cyclists across the state from Ohio to New York. And in Georgia, the designation of the first segment of USBR 15 means a bike-friendly connection through rural south Georgia.

“In the 35 years since AASHTO established U.S. Bicycle Route One, through Virginia and North Carolina, the number of participating states has grown to 26, in addition to the District of Columbia,” said Bud Wright AASHTO executive director. “More than half the states are today on the U.S. Bicycle Route System, giving daily commuters, bicycle tourists, and leisure cyclists more options for travel and recreation. The benefits are less traffic congestion, greater economic development, and healthier citizens--three big wins for communities everywhere.”

“We appreciate the efforts of the Michigan Department of Transportation for helping us reroute a portion of US Bike Route 35 through our town. With our one-way streets going in and out of town, we have some unique challenges in providing a single route. With this new alignment, the northern route is different from the southern route and it is more in line with what local bikers use to get through town already. We are excited that our visitors will now ride on this more scenic and comfortable route through Charlevoix. And we are thrilled to be a trail town located on US Bike Route 35.” Luther Kurtz – Mayor, City of Charlevoix

The USBRS is a developing national network of officially recognized, numbered, and signed bicycle routes. The new designations bring the total mileage of the system to 13,099. More than 40 states are working on designating and implementing official U.S. Bicycle Routes.

Digital maps for all designated U.S. Bicycle Routes - including all new routes - are now available to the public for free, using the Ride with GPS online platform, from the Adventure Cycling website.

The 410-mile U.S. Bicycle Route 50 runs east-west across Nevada, following much of the Lincoln Highway, coined “The Loneliest Road in America” by Life Magazine in 1987. Cyclists following USBR 50 through Nevada will experience the vastness of the Great Basin hydrographic region and parallel famous routes like the old California Trail and the Pony Express. The route encompasses 12 summits over 6,000 feet, 9 communities, 10 nearby state parks, Lake Tahoe, and Great Basin National Park.

“USBR 50 will have a positive impact, not only to our residents but to our bicycling visitors from around the world,” said Jamie Borino, Bicycle and Pedestrian Program Manager with Nevada DOT. “We’re proud to share this classic route of the American West as a new U.S. Bicycle Route.”

USBR 50 connects South Lake Tahoe, at the California border, to the existing U.S. Bicycle Route 79 in Utah. With work progressing on USBR 50 in California and USBR 77 in Utah, cyclists will soon be able to ride on officially-designated bicycle routes from Salt Lake City to San Francisco.

U.S. Bicycle Route 66 covers 345 miles across Missouri and 13 miles across the southeast corner of Kansas, connecting cyclists to Oklahoma and Illinois. It roughly parallels today’s I-44, which takes most motor vehicle traffic, leaving the historic Route 66 segments as relatively low-traffic side-roads that wander through the countryside, preserving traces of an American icon as it stood half a century ago.

Cyclists on USBR 66 can visit historic Marsh Bridge, Riverton Store (in continuous operation since 1925), the Galena Mining Museum, Old Chain of Rocks Bridge across the Mississippi River, the Big Chief Roadhouse in Wildwood, the Route 66 Museum in Lebanon, the Uranus Fudge Factory and General Store, Route 66 parks in Springfield and Joplin, Route 66 State Park in Eureka, many period hotels, bridges, and original stretches of historic roadway, and the birthplace of Route 66 in Springfield.

“We are so pleased to see this important historic route—already used by many bicyclists from across the world—officially adopted as part of the U.S. Bicycle Route System.  We much appreciate the work of MoDOT and leaders of communities along the route who have worked hard for this day. Riding this route really gives a glimpse into the soul of the American heartland.” Brent Hugh, Executive Director, Missouri Bicycle & Pedestrian Federation

“We’re excited for the opportunity to designate our portion of Historic Route 66 as a United States Bicycle Route. We’ve been working with other state agencies and local communities to develop and promote active tourism along our state’s byway system. This designation helps support our efforts and attracts travelers to our state.” – Matt Messina (KS Bicycle and Pedestrian Coordinator)

USBR 66 is important for the homage it pays to historic Route 66, but also because it intersects with other key bicycle touring routes, including the Mississippi River Trail, the Great Rivers South Bicycle Route, the Transamerica Trail (USBR 76), the Lewis and Clark Bicycle Touring Route, and USBR 51 connecting Missouri to Louisiana and Minnesota, currently under development. Additionally, with the designation of U.S. Bicycle Route 66 in Missouri and Kansas, interest has picked up in other states located along the historic road.

U.S. Bicycle Route 30 extends 46 miles along the shore of Lake Erie, from Ohio to New York, and is locally known as BicyclePA Route Z. Cyclists along USBR 30 will enjoy sandy beaches, historic lighthouses, ecological diversity – and the 3,200 acre National Landmark, Presque Isle State Park, which is ranked as the #1 Freshwater Beach in North America.

U.S. Bicycle Route 36, extends 398 miles across the center of Pennsylvania, from Ohio to New York, and is locally known as BicyclePA Route Y. USBR 36 follows much of U.S. Route 6, which was one of the first highways used to move natural resources, people, and products across the country. As such, the route showcases U.S. industrial history, including the first underground mine, the first steam locomotive, and the first lighthouse on the Great Lakes. Cyclists along USBR 36 will also experience the Allegheny National Forest, Lake Erie, and the Pennsylvania Grand Canyon.

“Our principal mission is making transportation as safe and accessible as possible, no matter how you travel,” PennDOT Secretary Leslie S. Richards said. “These designations complement our significant investments and focus on connectivity and safety in these regions so people can experience all that Pennsylvania has to offer.”

“These bike route designations will lead to new transportation and recreational opportunities in countless towns across northern Pennsylvania,” said Carrie Lepore, deputy secretary for marketing, tourism, and film. “By building out our bicycle infrastructure, we’re increasing our ability to attract new businesses, boosting Pennsylvania tourism, and making our commonwealth a better place to live, work, and play.”

U.S. Bicycle Route 15 is the second officially-designated route in Georgia and currently extends 92 miles. USBR 15 starts at the Florida-Georgia border and travels north through Valdosta, Nashville, Enigma, Ocilla, Fitzgerald, and ends in Rochelle. The landscape is rural and mostly flat, and cyclists on USBR 15 can expect lots of dense greenery with the occasional large open field.

U.S. Bicycle Route 15 is being designated in segments, and the next stage will see the route extended through Pineview, Hawkinsville, Irwinton, Toomsboro, and Milledgeville, with spurs to Lakeland, Tifton, Atlanta, and Macon. Eventually, USBR 15 will connect to the Georgia-North Carolina border, traversing hilly and scenic North Georgia.

Download web-ready photos and a web-ready overview map of the USBRS. For high-res images, or to arrange an interview, please contact Lisa McKinney at lmckinney@adventurecycling.org or (406) 370.2421.

Tweet: With the addition of USBR 50 in Nevada, and new routes in Missouri, Kansas, Pennsylvania, and Georgia,  the U.S. Bicycle Route System expands to 13,117 miles 26 states. @usbicycleroutes https://goo.gl/34bSCH

Facebook/Newsletter: The U.S. Bicycle Route System expands to 13,117 miles in 26 states with the addition of USBR 50 in Nevada and additional new routes in Missouri, Kansas, Pennsylvania, and Georgia. https://goo.gl/34bSCH