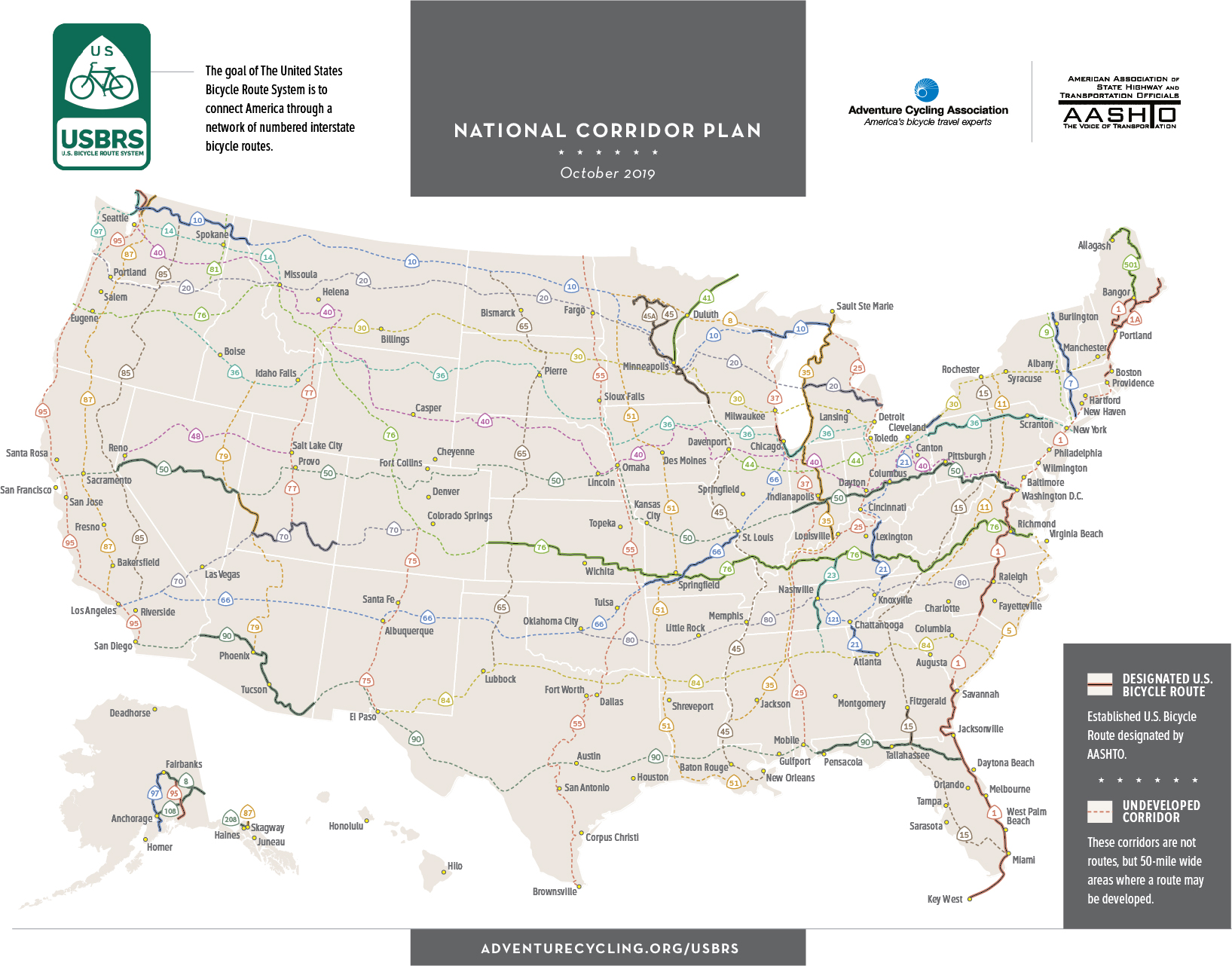 Over 300 new miles of U.S. Bicycle Routes are officially designated in West Virginia and Maine, following the October meeting of the American Association of State Highway and Transportation Officials (AASHTO).

MISSOULA, MONT., November 11, 2019 — With the designation of USBR 50, West Virginia becomes the 27th state to join the U.S. Bicycle Route System (USBRS). In Maine, USBR 501 connects cyclists to the far northern border with Canada. Together, the two new U.S. Bicycle Routes push the total mileage of the USBRS to over 14,000 miles.

“AASHTO’s annual designations to the U.S. Bicycle Route System support local economies and tourism by giving cyclists greater access to communities in urban, suburban, and rural areas of the country,” said Jim Tymon, Executive Director of AASHTO. “This year, West Virginia joined a growing list of states that have designated a bike route, and I see no reason why this trend won’t continue as the popularity of cycling continues to grow."

The USBRS is a developing national network of officially recognized, numbered, and signed bicycle routes. All U.S. Bicycle Routes are designated by AASHTO. With the new designations, the USBRS now boasts 14,070 miles of routes in 27 states and Washington, DC. At least 40 states are currently developing U.S. Bicycle Routes.

Digital maps for all designated U.S. Bicycle Routes are available to the public for free, thanks to a partnership with Ride with GPS, from the Adventure Cycling website.

In West Virginia, USBR 50 crosses the state’s northern panhandle, closing a gap that connects Indiana and Ohio to Pennsylvania, Maryland, and Washington, DC.

“The approved route for USBR 50 in West Virginia is an important connection between Pennsylvania and Ohio, and this short section features low-volume rural roads, beautiful scenery, varied terrain, and the hospitable city of Weirton,” said Perry Keller of the West Virginia Department of Transportation.

Prior to designation, five potential route alignments were studied as options to extend USBR 50 from the Market Street Bridge in Steubenville, Ohio, to the Panhandle Trail at the Pennsylvania state line. A public meeting was held in September 2018 to present the alignments, and the approved route was selected because it provides the most direct connection to Ohio and Pennsylvania. It also provides shopping, food, and service opportunities for long-distance cyclists riding through Weirton.

“This designation puts the Northern Panhandle on the national map for bike touring, and connects West Virginia’s active transportation network with those of other states,” said Michael Paprocki of the Brooke Hancock Jefferson Metropolitan Planning Commission.

With this designation, U.S. Bicycle Route 50 runs continuously from Washington, DC, to the Indiana-Illinois border and will eventually connect all the way to San Francisco.

USBR 501 highlights the region’s cultural resources, including the Swedish Colony, numerous Amish communities of southern Aroostook, and the Acadian heritage of the St. John River valley. “It also highlights the importance of agriculture and forestry to the regional economy,” added Kamm.

Tweet: With USBR 50 in West Virginia and USBR 501 in Maine, the U.S. Bicycle Route System expands to 27 states and 14,070 miles. @usbicycleroutes #USBRS

Facebook/Newsletter: The U.S. Bicycle Route System expands to 14,070 miles and 27 states with the addition of USBR 50 in West Virginia and USBR 501 in Maine.