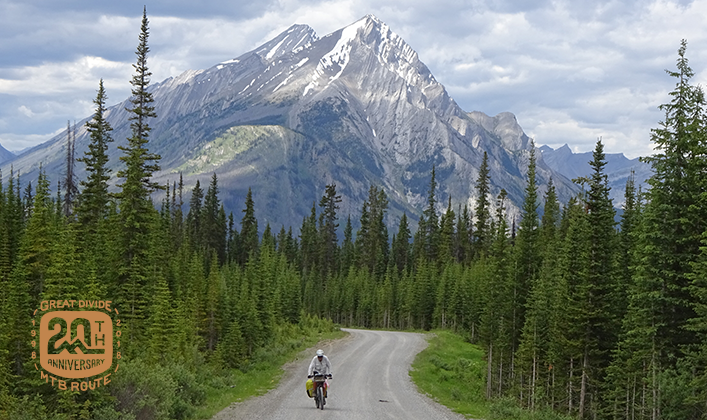 “The redesigned maps will impress anyone who has used our maps and ridden the route in the past 20 years,” said Adventure Cycling’s Routes & Mapping Director, Carla Majernik. “They are easier to read, design updates have made them more user-friendly, and adding south-to-north cues gives the riders what they have asked for. Plus there's new routing northward from Banff to Jasper along the east side of the Rocky Mountains, and a spur into Missoula.”

Tracing the spine of the Rocky Mountains through five of the West’s most spectacular states, the Great Divide Mountain Bike Route now spans more than 3,000 miles between Jasper, Alberta, and Antelope Wells, New Mexico, at the Mexican border. The route is defined by the word "remote" and its remoteness equates with spectacular scenery and terrain: alpine lakes, grizzly bear sightings, moose crossings, wolves howling, and pitch black nights smacked silly by stars. The entire route is basically dirt-road and mountain-pass riding every day. End-to-end, a dirt-seeking bicycle traveler, or “bikepacker”, will clock more than 220,000 feet of elevation gain — similar to climbing Mt. Everest ten times!

“What we learned about the GDMBR, besides how hard it was, is that people are kind, the days are long, but when you set your mind to it, you can achieve anything”, wrote Carrie Morgridge, author of The Spirit of the Trail. “The sights, sounds, and smells of the Great Divide are forever etched on my heart and in my head. There is nothing else I’ve done in my life that has created such lasting and fond memories.” 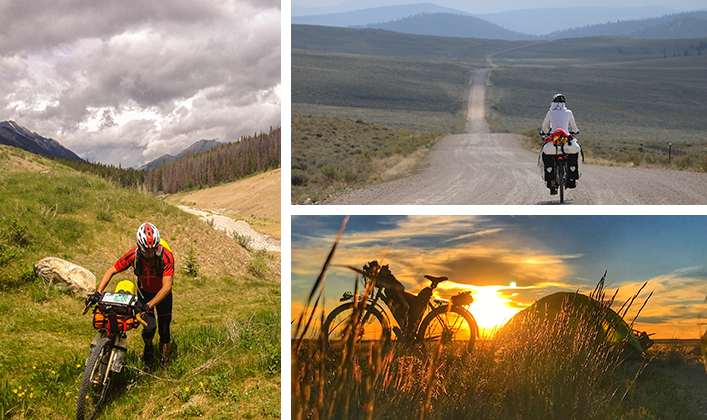 The new routing begins in Jasper, the quieter of the two main national park towns in Alberta, and immediately casts into the wilds on the historic singletrack Overlander Trail, heading north to Hinton and southeast to Banff. Just south of Hinton you are presented with an alternate route that puts you right into the Rocky Mountains and passes by the historical coal mining town of Cadomin. Camping options along this section are plentiful, including Ram Falls Provincial Park, an area of outstanding scenic value.

Further south between Round Prairie and Elko, British Columbia is another route change that follows the brand new Elk Valley Trail (EVT), a component of The Great Trail, connecting the Elk Lakes/High Rockies Trail to the Cranbrook/Wardner Trail. It is the gateway to British Columbia from the east. The EVT traverses over mountainsides and through the Elk River Valley while providing a combination of single-track, backcountry roads, and existing community trails to create an impressive 80 mile, signed route.

Across the border in the U.S. is a spur route from Seeley Lake to Adventure Cycling’s headquarters in Missoula, MT. At just a hair over 65 miles, this is a challenging route through a maze of steep terrain on a mix of surfaces including overgrown old logging roads and singletrack trail. The 29 miles between Seeley Lake, Gold Creek, and the lower slopes of Wisherd Ridge, the Missoula Spur takes you through land currently owned and managed by The Nature Conservancy. Nestled within the sweeping Crown of the Continent ecosystem, this land encompasses some of the most critical Canada lynx habitat in the West and serves as a vital pathway for grizzly bear and wolverine.

These changes increase the total mapped route miles of the Great Divide Canada by 427.5, including 167.5 miles of alternate routes such as the old main route over Flathead, Cabin and Galton Passes and the infamous “Wall” at Wigwam River. A detailed description of the new routing can be read on Adventure Cycling’s website.

In addition to the paper maps, Bicycle Route Navigator app users have gained the ability to purchase map sections within the app. Similar to the GDMBR paper maps, this app has the information you need to navigate with confidence. Some features of the app include: show or hide bicycling services (e.g., campgrounds, bike shops, lodging, and towns), embedded Google search for even more services, contact services with handy click-to-call buttons, the ability to calculate the distance between two points on the route and see the elevation profile, real time wind and weather data, and an offline capability when there is no available cell service. GPX data is also ready for users who wish to navigate via their Garmin device or app that accepts GPX data files.

The Great Divide Mountain Bike Route is for Everyone!

The Great Divide Mountain Bike Route is incredibly popular with riders of all abilities. On a hot June afternoon in 2015, legendary endurance racer Jay Petervary rolled into Ovando, Montana, leading the Tour Divide Race. He stopped long enough to grab a snack and let 13-year-old Julia Todd snap his picture. “So when are you going to ride the Divide?” he asked Julia. She lowered her camera and said with a smile, “I am right now.” Julia, her parents, and her five brothers and sisters were midway through a 10-week family vacation on the Great Divide. They shared the road with everyone from spandex-clad endurance racers to relaxed riders out for a weeklong tour. As a family, they pedaled quiet roads and saw some of America’s best unspoiled terrain while creating memories that will stay with them forever. Over the last 3 years, Adventure Cycling Association reports selling an average of 5,000 map sections per year to bicycle travelers of all levels of ambition.

“Salsa Cycles congratulates the Adventure Cycling Association on the 20th Anniversary of the Great Divide Mountain Bike Route. Thank you for providing cyclists with wildness and self-discovery, an opportunity to disconnect and reconnect, sleep under the stars, and feast on the finest gas station cuisine.” said Mike Riemer, Salsa's Marketing Manager

Cyclists looking to experience the route and bikepacking can simply pick a scenic stretch and go ride — Adventure Cycling’s detailed maps for the route make finding your way easy. For more information about the Great Divide Mountain Bike Route or to purchase maps, visit http://www.adventurecycling.org/GDMBR

About the Adventure Cycling Route Network: The network features rural and low-traffic established bicycling routes through some of the most scenic and historically significant terrain in North America. Currently more than 47,283 miles have been mapped with turn-by-turn directions, detailed navigational instructions for the tricky sections, and elevation profiles in the high country. Adventure Cycling’s maps are also waterproof and designed to fit in a handlebar bag window or jersey pocket. The maps provide information specifically for cyclists, such as the locations of bike shops, sources for food and water, and listings of overnight accommodations including camping facilities, hotels, and cyclist-only lodging. In addition to a Bicycle Route Navigator App, there is GPX data available for all routes that can be uploaded to your smartphone or GPS device. Adventure Cycling’s Routes & Mapping Department is constantly working on research and development of new routes as well as the maintenance of the 47,283 miles of existing routes.