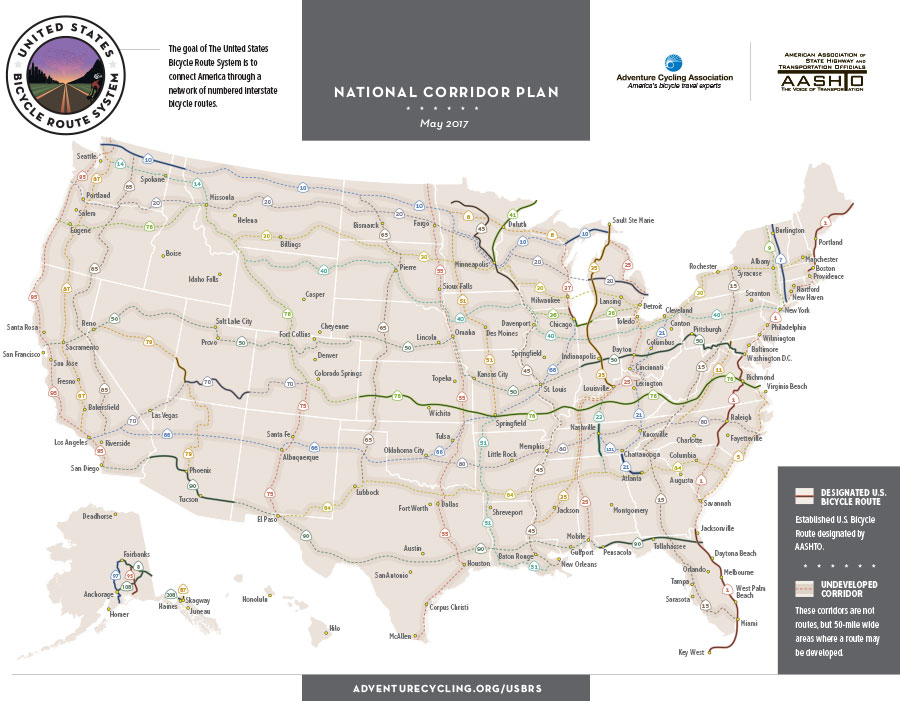 With the addition of USBR 50 in Pennsylvania, the U.S. Bicycle Route System expands to 11,726 miles and covers half the states in America.

Missoula, Montana, June 12, 2017 — Pennsylvania’s first nationally designated bicycle route – U.S. Bicycle Route 50 – was officially approved in May by the American Association of State Highway and Transportation Officials (AASHTO), and makes Pennsylvania the 25th state to join the developing U.S. Bicycle Route System (USBRS). The 163-mile route mostly follows off-road trails, including the popular Great Allegheny Passage, Montour Trail, and the Panhandle Trail. Cyclists can now ride 538 miles on U.S. Bicycle Route 50 from Washington, DC, to the Indiana/Illinois border. Once completed, the route will connect all the way to San Francisco.

“We are very proud to have, along with our partners, developed more than 160 miles of trails and roadway for U.S. Bicycle Route 50,” said Leslie S. Richards, Pennsylvania Department of Transportation (PennDOT) Secretary. “We expect the designation of U.S. Bicycle Route 50 to result in significant transportation, health, and economic benefits to the region.”

The USBRS is a developing national network of officially recognized, numbered, and signed bicycle routes. The new USBR 50 designation brings the total mileage of the system up to 11,726. More than 40 states are working on designating and implementing official U.S. Bicycle Routes.

“The U.S. Bicycle Route System is an important link in America’s interconnected multimodal transportation network” said Bud Wright, executive director of AASHTO. “From highways, transit, pedestrian trails, bridges, waterways, and bicycle routes – state departments of transportation are committed to giving travelers and tourists as many options as possible, to get where they want to go, how they want to get there.”

Adventure Cycling Association, a nonprofit that provides national coordination for the U.S. Bicycle Route System, partners with AASHTO to ensure states have the resources and expertise needed for successful route designation. Executive director Jim Sayer said, “It is really exciting to have half the states in America plus Washington, DC with designated U.S. Bicycle Routes. We think that USBR 50 is going to be very attractive to cyclists around the world, with the route’s combination of trails and low traffic volume roads.”

Pennsylvania’s portion of U.S. Bicycle Route 50 connects Maryland to West Virginia through a variety of natural and agricultural landscapes, historical sites, thriving small towns, and recreational hot spots. Cyclists can visit restored rail stations; Ohiopyle State Park, which has some of the best white water rafting on the East Coast; Point State Park in Pittsburgh; and the nearby Fort Pitt Museum. Additionally, Amtrak’s Capitol Limited route parallels U.S. Bicycle Route 50 between DC and Pittsburgh and offers the opportunity for cyclists to carry their bikes on or off the train at any station. This multimodal option allows for more flexibility to plan bicycle trips without a car.

More information about U.S. Bicycle Route 50 will be available on the PennDOT website at www.penndot.gov/TravelInPA/RideaBike/Pages/default.aspx.  In addition, Adventure Cycling’s website provides a wealth of resources and tools for route implementation, as well as links to maps and other resources for cyclists wishing to ride established U.S. Bicycle Routes. Learn more about the USBRS at www.adventurecycling.org/usbrs.

Download web-ready photos of cyclists and routes, web-ready USBRS shield image, and a web-ready overview map of the USBRS. For high-res images, or to arrange an interview, please contact Lisa McKinney.

Tweet: With the addition of USBR 50 in PA, the U.S. Bicycle Route System expands to 11,726 miles. @usbicycleroutes https://goo.gl/cruh8c

Facebook/Newsletter: The U.S. Bicycle Route System expands to 11,726 miles with the addition of USBR 50 in Pennsylvania. https://goo.gl/cruh8c