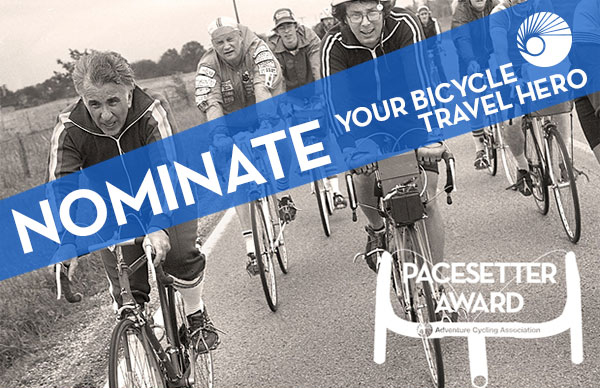 “Adventure Cycling’s national awards program is our way of saying thank you for the generous contributions made by individuals and organizations to improve conditions for bike travel and touring cyclists in the U.S.,” said Communications Director Lisa McKinney.

The Pacesetter Bicycle Travel Award recognizes the efforts of those that have supported or promoted bicycle travel in the U.S. in an exemplary way. This award is named after Charlie Pace (Columbus, OH), who has spent decades creating and supporting bicycle-travel opportunities.

The June Curry Trail Angel Award thanks a generous individual or group that has made a traveling cyclist’s journey easier, or possible, and is named after June Curry (Afton, VA), the famous “Cookie Lady” of the TransAmerica Bicycle Trail. Over the course of three decades June has brightened the journey of over 11,000 touring cyclists by providing them with refreshments along the way.

The Braxton Bike Shop Award honors a bike shop that has promoted bike travel in an outstanding fashion, and built enthusiasm about bike touring in their community. Braxton Bike Shop (Missoula, MT), the inaugural winner of this award, was integral to the success of Bikecentennial ‘76, the event that kick-started Adventure Cycling Association.

The Adventure Cycling Volunteer of the Year Award is presented to an extraordinary volunteer who has assisted the organization in furthering its goal of inspiring people of all ages to travel by bicycle.