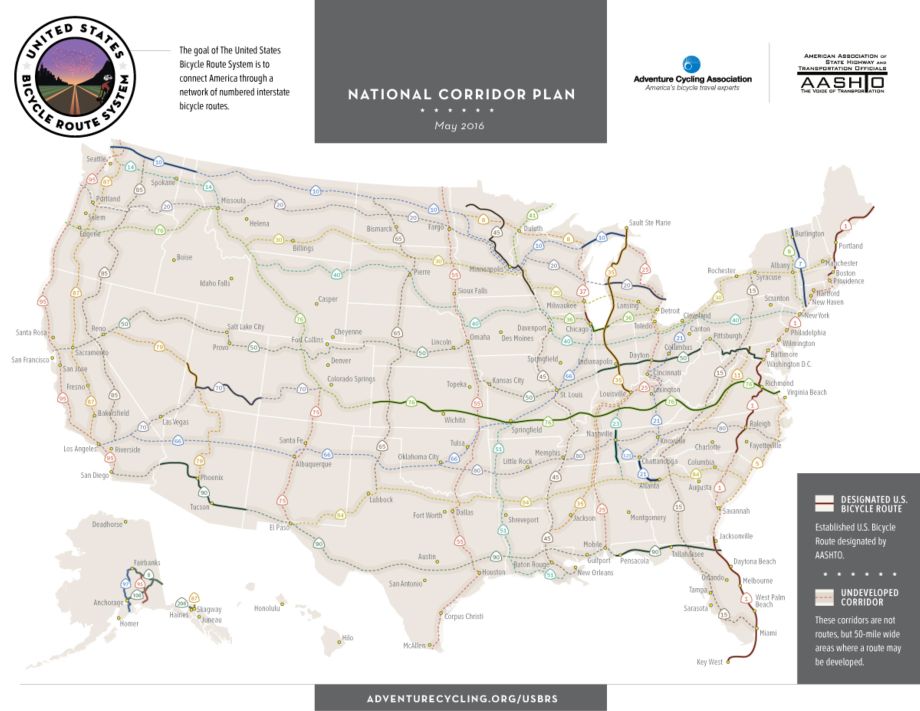 “State departments of transportation (DOTs) know that bicycling for transportation and recreation leads to healthier communities and more vibrant economies,” said Bud Wright, AASHTO executive director. “This spring, state DOTs are adding nearly 200 miles of new U.S. Bicycle Routes to the existing 11,000 miles of the USBRS. Creating safe routes for people to travel by bicycle enhances tourism and economic development opportunities for the communities and businesses along these routes.”

Adventure Cycling Executive Director Jim Sayer commented, “The U.S. Bicycle Route System now connects nearly half the states in the nation — after only five years of route designations. Thanks to hundreds of agency officials, non-profit leaders, and volunteers, we are well down the road to creating the largest official cycling network on the planet.”

U.S. Bicycle Route 7 (USBR 7) follows the Western New England Greenway (WNEG) through Vermont, Massachusetts, and Connecticut, all 380 miles of which are now completely designated. The Connecticut portion is routed along the Housatonic River through gently rolling terrain marked by farmland and river views. The two large towns of Norwalk and Danbury are separated by country scenery and a nice ride along the Saugatuck Reservoir. Cyclists can stop at Lovers Leap State Park near Milford which has an extensive trail system, and many of the trails are designed for bicycles. The park is a nice rest stop before visiting the numerous small towns on the way to Massachusetts.

Cyclists will cross two covered bridges along the WNEG: the West Cornwall Bridge and the Bull's Bridge. The one-lane Bull’s Bridge takes riders over the Housatonic River and just north of the bridge is a small railroad museum. Around both bridges there are a number of hiking trails which provide great views.

Touring cyclist and Western New England Greenway volunteer Terry Burke has ridden the WNEG with his wife on a tandem for four years in a row and is planning another ride this July starting in New York City. He noted the importance of integrating the route into the USBRS: “Obtaining this official designation will help promote the WNEG as a beautiful and historical bikeway that connects New York City with Montreal. The WNEG will receive national exposure and bring this exciting new route to many cyclists who would not otherwise be aware of the biking adventure that awaits them.”

U.S. Bicycle Route 7 (USBR 7) continues along the Western New England Greenway in Massachusetts. It passes through the Berkshires region and some of the state’s most scenic towns and pristine areas including Great Barrington, Stockbridge, Lenox, Pittsfield, Adams, North Adams and Williamstown. While USBR 7 generally follows the U.S. Route 7 corridor, it seldom uses Route 7 as part of the bike route. The route uses mostly scenic secondary roads, often associated with historical sites, and rail trails.

Terry Burke remarked on the dual benefits of the route: “USBR 7 along the Western New England Greenway not only provides a wonderful ride through the scenic, culturally and historically rich Housatonic Valley, Berkshires Hills, and Lake Champlain Valley, but also enhances sustainable transportation and recreation opportunities by linking the communities along the route.”

Bicyclists will follow meandering back roads to Sheffield and Great Barrington and can stop in at the Norman Rockwell Museum in Stockbridge, home of the largest collection of original Norman Rockwell art.

Leaving Pittsfield, the route enters the Ashuwillticook Northern Trailhead for a 10-mile ride to Adams, Massachusetts. Off-road and along the river, the trail encourages a leisurely pace for the first riding away from traffic. Ashuwillticook (ash-oo-will-ti-cook) means “the pleasant river in between the hills,” and the name was given to recognize the original Native American name for the south branch of the Hoosic River.

The ride from Adams through North Adams and on to Williamstown can be more congested but provides a wide variety of services. The route bypasses the edge of Williamstown for simplicity in directions, but the home of Williams College is a great town to wander around and enjoy the atmosphere.

Georgia Department of Transportation (GDOT) designated U.S. Bicycle Route 21 (USBR 21) last fall, as well as two spurs — USBR 321 and 521 — that travel through other destinations in northwest Georgia and connect back to the main route. GDOT is now adding a third spur, USBR 621, which is a 25.5-mile alternative route that loops back to the USBR 21 main route.

Katelyn DiGioia, GDOT Bicycle and Pedestrian Engineer, remarked on GDOT’s dedication to providing bicycle touring and transportation routes through USBRS designation. “We’re continuing to build and improve the USBRS in Georgia. The designation of the new USBR 621 spur now loops the city of Rome into USBR 21 and provides another great destination for touring cyclists.”

Rome is the largest city in northwest Georgia, built at the confluence of the Etowah and the Oostanaula rivers on seven hills and founded in 1834. It hosts several great downtown restaurants, a bike shop, hotels, and other local amenities. The Georgia DOT plans to sign the entire USBR 21 corridor, including USBR 621.

U.S. Bicycle Route 76 (USBR 76) was originally designated following the TransAmerica Trail in 1982 and travels 533 miles across Virginia from Yorktown to Breaks Interstate Park at the Kentucky border. This spring, the Virginia Department of Transportation (VDOT) has designated a new spur, USBR 176, which follows a new paved bicycle path called the Virginia Capital Trail into downtown Richmond. The USBR 176 spur then connects to USBR 1 in Richmond which connects back to USBR 76 near Ashland.

The alternate route through Richmond is four miles shorter than the main USBR 76 route, which circumvents the city. The USBR 176 spur takes cyclists along nearly sixteen miles of the Virginia Capital Trail, and the trail continues for 53 more miles along USBR 76, all the way to Jamestown near the eastern end of the route.

John Bolecek, VDOT Bicycle and Pedestrian Planner, remarked, “The USBR 176 connection to the existing USBR 76 provides an option for touring cyclists to ride the entire Virginia Capital Trail. This designation will publicize an already popular route and increase tourism and access to businesses along the Capital Trail and in both Henrico and the City of Richmond.”

The City of Richmond is a vibrant, bicycle-friendly town that provides access to services like bike shops and lodging, including a new hostel with bike storage. For those wishing to start or end their bike tour in Richmond, there is also access to the Richmond Airport, Amtrak train station, Megabus, and Greyhound.

U.S. Bicycle Route 10 (USBR 10) was designated in Idaho last spring and the Idaho Transportation Department (ITD) is now improving a short section of the route through Sandpoint. The realignment is less than a mile from the Sandpoint-Dover Community Trail to Bridge Street and takes advantage of the Explore Sandpoint! bicycle network through the historic downtown and a creek-side trail.

Aaron Qualls of the City of Sandpoint notes the draw of Sandpoint as a destination for touring cyclists: “Sandpoint has been voted ‘The Most Beautiful Small Town in American’ by Rand McNally. The City offers world-class recreational opportunities, a historic downtown, abundant public art, many year-round local events, outstanding restaurants, exceptional parks and trails, and walkable neighborhoods. All are juxtaposed by the largest lake in Idaho — the beautiful Lake Pend Oreille.”

For on or off-road cyclists, Sandpoint and the surrounding region have a lot to offer. The City prides itself on its bikable and walkable qualities and for a community of its size, has a surprising number of trail systems with exceptional terrain outside of town. These extensive trail systems are a testament to the thriving bicycle and recreation culture of the area which is also enriched by Schweitzer Mountain Ski Resort to the north.

Sandpoint is also located on the Selkirk International Loop — a spectacular 280 miles connecting Washington, Idaho, and Canada and the route of the annual “WaCanId” Bike Ride.

Building the Largest Bicycle Route Network in the World

The U.S. Bicycle Route System will eventually be the largest official bicycle route network in the world, encompassing more than 50,000 miles of routes.

Adventure Cycling Association has provided dedicated staff-support to the project since 2005, including research support, meeting coordination, and technical guidance for states implementing routes. Adventure Cycling’s website provides resources and tools for route implementation, as well as links to maps and other resources for cyclists wishing to ride an established U.S. Bicycle Route.

AASHTO’s support for the project is crucial to earning the support of federal and state agencies. AASHTO is a nonprofit, nonpartisan association representing highway and transportation departments in all 50 states, the District of Columbia, and Puerto Rico. A powerful voice in the transportation sector, AASHTO’s primary goal is to foster the development of an integrated national transportation system.

Support for the U.S. Bicycle Route System comes from Adventure Cycling members, donors, foundations, and a group of business sponsors that participate in the annual Build It. Bike It. Be a Part of It. fundraiser each May.

Download web-ready photos of cyclists and routes, web-ready USBRS shield images, and a web-ready overview map of the USBRS. For high-res images, or to arrange an interview, please contact Lisa McKinney.

Learn more about the U.S. Bicycle Route System by watching this video.