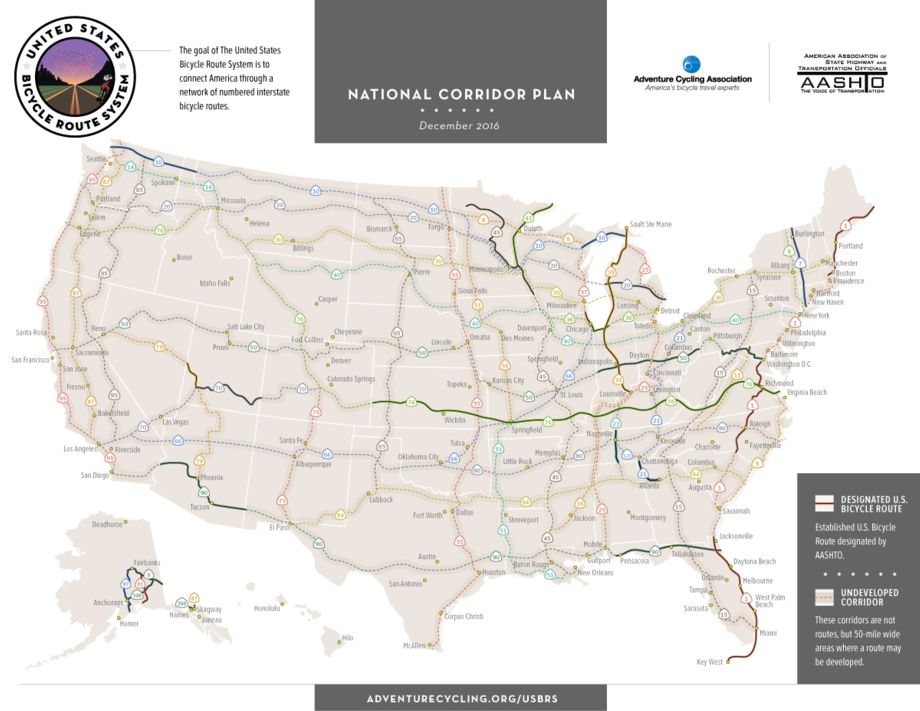 Missoula, Montana, December 6, 2016 — Cyclists visiting Minnesota now have a new way to explore 315 miles along the western shores of Lake Superior – the newly approved U.S. Bicycle Route 41 (USBR 41), also known as the North Star Bicycle Route. USBR 41 connects the capital city of St. Paul to Grand Portage State Park at the Canadian border, where bicyclists can end their journey with a view of Minnesota’s highest waterfall on the Pigeon River.

Putting Minnesota on the National Map

U.S. Bicycle Route 41 was approved last month by AASHTO, the American Association of State Highway and Transportation Officials, and is now part of the U.S. Bicycle Route System (USBRS), a developing national network of officially recognized and numbered bicycle routes. The newest designation brings the total miles in the system up to 11,563 through twenty-four states.

"The U.S. Bicycle Route System continues to grow thanks to the efforts of a coalition that includes state departments of transportation, local transportation officials, Adventure Cycling, volunteers and cycling advocacy groups," said Bud Wright, AASHTO executive director. "AASHTO is proud to be a part of the ongoing expansion of a national transportation network that supports bicycle tourism and ensures visiting bicyclists have an enjoyable route to explore participating states."

Adventure Cycling Association, a nonprofit that provides national coordination for the U.S. Bicycle Route System, partners with AASHTO to ensure states have the resources and expertise needed for successful route designation. Executive director Jim Sayer noted that, “Minnesota’s USBR 41 will draw visitors from around the country and internationally, fortifying local economies along the route. That’s one of the best parts about the US Bicycle Route System – communities large and small can connect to the national network and reap big benefits immediately.”

Connecting the Great Lakes and the Gulf

USBR 41 combines existing roads and mixed-use paths and trails to create a route that winds its way through some of Minnesota’s most beloved and popular locations.  It passes through two national parks – the Mississippi National River and Recreation Area and Grand Portage National Monument – and connects to nine state parks as well as the Superior National Forest. In addition, USBR 41 passes through two nationally recognized bicycle-friendly communities: Duluth and Grand Marais, as well as numerous cities with small-town charm.

The route also joins the Mississippi River Trail in St. Paul, designated as USBR 45 in 2013, which connects Minnesota to the Gulf of Mexico in Louisiana. “USBR 41 provides the opportunity for people to travel between two seamless and continuously designated routes,” said Liz Walton, the Minnesota Department of Transportation’s (MnDOT) USBR 41 project manager. “From the Great Lakes to the Gulf of Mexico, two of the nation’s great water bodies are now connected by bicycle.”

Nearly half the route includes off-road segments on some of the state’s most popular trails. There are plenty of opportunities for families and less experienced bicyclists to travel and enjoy the route.  USBR 41 includes a short segment of the Gateway State Trail and the complete Willard Munger and Gitchi Gami State Trails.  It also includes the regional Bruce Vento, Hardwood Creek and Sunrise Prairie Trails, and numerous other local trails.

A ribbon cutting ceremony is planned in May at the junction of USBRs 41 and 45 in downtown St. Paul. The event will kick off a USBR 41 grand-opening, multi-day bicycle ride all the way to the Canadian border.

MnDOT is preparing a new USBR 41 website where printable and downloadable electronic/GPS maps will be available.  In addition, Adventure Cycling’s website provides a breadth of resources and tools for route implementation, as well as links to maps and other resources for cyclists wishing to ride an established U.S. Bicycle Route.

Learn more about the USBRS at www.adventurecycling.org/usbrs. Visit www.dot.state.mn.us/bike/usbr41/index.html to learn more about USBR 41 and the upcoming ribbon cutting.

Download web-ready photos of cyclists and routes, web-ready USBRS shield images, and a web-ready overview map of the USBRS. For high-res images, or to arrange an interview, please contact Ginny Sullivan.

Tweet: With the addition of USBR 41 in MN, @usbicycleroutes national route system expands to 11,563-miles:  https://goo.gl/7NuYyh

Facebook/Newsletter: The U.S. Bicycle Route System expands to 11,563-miles with addition of USBR 41 in MN: https://goo.gl/7NuYyh