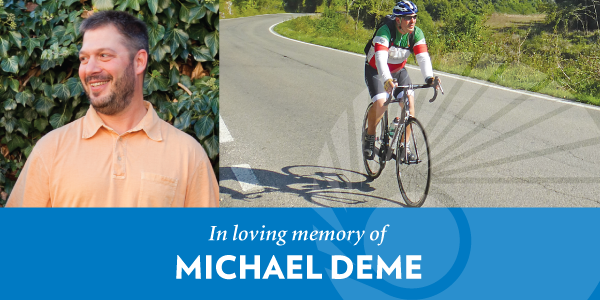 “This is a tremendous loss for the organization, operationally and personally,” said Jim Sayer, Adventure Cycling’s executive director. “It is no overstatement to say that Mike was one of the most important staff people in Adventure Cycling’s history, in the way that he transformed the magazine into one of the most beloved cycling magazines anywhere. He also played a crucial role in diversifying our communication offerings and developing our Design and Media department. We are all still trying to absorb what life without Mike Deme will be like.”

Mike served as Assistant Editor, Editor-in-Chief, and Executive Editor of the publication beginning in 1998 and guided Adventure Cyclist’s growth as a voice for bicycle travel and two-wheeled adventure around the world. In 2015, he moved into the Executive Editor position as he took on a greater organizational role as the Director of Design and Media for Adventure Cycling.

Mike’s unexpected passing leaves a void in the organization where he began in the mailroom and quickly found his way into publications where, in addition to the magazine, he contributed to and oversaw countless promotional materials, catalogs, and the pre-Google clearinghouse for bicycle travel information, the Cyclists’ Yellow Pages. The passion he brought to his work throughout his career is irreplaceable, and his mark on Adventure Cycling, bicycle travel, and cycling in general is profound.

Raised in Connecticut, Mike’s other passion was chasing a little white ball around the golf course and watching the New York Giants, along with his “side job” of nearly 30 years as one of Missoula’s best-known bartenders.

Adventure Cycling will host a celebration of Mike’s life and work this spring.

Mike’s family will be hosting a memorial service to celebrate his life this Thursday, April 6, at 2 PM. The service will be at Garden City Funeral Home, 1705 W. Broadway., Missoula, MT 59808.