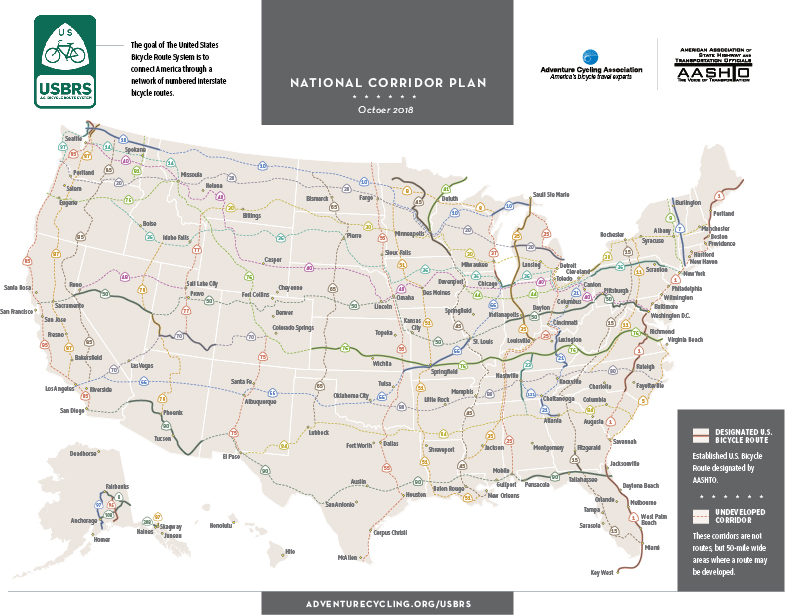 MISSOULA, MONT., October 8, 2018 — With the official designation of two new U.S. Bicycle Routes, Kentucky now has a total of 856 miles of connected bicycle-friendly roads, ranking them fifth overall in a list of states with the most miles in the national network.

U.S. Bicycle Route (USBR) 21 follows much of the Boone Trace, the historic trail that Daniel Boone established in 1775. The 265-mile route connects the Ohio River in Mason County, Kentucky, through the heart of the Bluegrass Region, to the edge of the Cumberland Gap in Tennessee.

USBR 23 connects the Cave Region of Kentucky from USBR 76 to the Tennessee border. The 109-mile route travels through the small towns and historic sites of southwestern Kentucky and connects to Mammoth Cave National Park.

Both routes connect to U.S. Bicycle Route 76, which was originally designated in 1982 and has been updated several times since, providing cyclists with multiple connected route options across the state of Kentucky. All routes were designed to take advantage of low-traffic roads, allowing for a scenic and comfortable cross-state ride.

"Kentucky is now ranked as one of the top five states with the most miles on the U.S. Bicycle Route System,” said Bud Wright, AASHTO’s executive director. “By partnering with community members the Kentucky Transportation Cabinet has this year earned designation for routes 21 and 23, creating new north-south connections with its neighboring states. When we grow the U.S. Bicycle Route System we’re giving residents and tourists alike greater access to a healthier transportation option.”

The U.S. Bicycle Route System (USBRS) is a developing national network of officially recognized, numbered, and signed bicycle routes. All U.S. Bicycle Routes are designated by the American Association of State Highway and Transportation Officials (AASHTO). These new routes bring the total mileage of the USBRS to 13,470. More than 40 states are working on designating and implementing official U.S. Bicycle Routes.

“USBR 21 features the route opened by Daniel Boone in 1775 — the first road ever into the land west of the Appalachian Mountains, which began the ‘westward movement’ of our country. The bicycle route is a modification of the auto tour using alternate roads to make it safer and more pleasant, passing many historical points of interest along the way.” –John M. Fox, MD, President, Friends of Boone Trace, Inc.

“We are so excited about USBR 23. We spent a lot of time riding and selecting the roads to be part of this new route that traverses our state. Roads were selected that have light vehicle traffic and offer the best scenery southern Kentucky has to offer. Cyclists who visit our region will quickly see the wonderful roads that those of us already here ride on daily.” –Eddie Bruner, President, Cave Country Trails, Inc.

“We’re proud to say this announcement propels Kentucky into the top five states with the most miles of U.S. Bike Routes. These two trails explore the heart of the Bluegrass and Kentucky’s southern cave country, and we hope these designations draw more cyclists to the Commonwealth to experience safe, scenic riding.” –Andy Barber, State Highway Engineer, Kentucky Transportation Cabinet

Stakeholders for both routes intend to install USBRS signs in the near future.

Digital maps for all designated U.S. Bicycle Routes — including USBR 21 and 23 in Kentucky — are now available to the public for free, thanks to a partnership with Ride with GPS, from the Adventure Cycling website.

Tweet: With the addition of USBR 21 and USBR 23 in Kentucky, the U.S. Bicycle Route System expands to 13,470 miles. @usbicycleroutes #USBRS

Facebook/Newsletter: The U.S. Bicycle Route System expands to 13,470 miles with the addition of USBR 21 and USBR 23 in Kentucky.