Over the past five decades, Siple has dedicated his career and volunteer time to promoting and inspiring people from all walks of life to use the bicycle as a means of travel and adventure. Along with his father Charles, Siple founded the Tour of the Scioto River Valley (known as TOSRV and a precursor to today’s mass bike events). With his wife June, he completed Hemistour, the first bicycle tour from Alaska to Argentina, which was featured in the pages of National Geographic in 1973 and could be called a foundational ride for the current bikepacking and touring boom. Last but not least, with his wife June, and Dan and Lys Burden, he co-founded Bikecentennial ’76, now Adventure Cycling Association, the largest cycling membership organization in North America, which remains dedicated to bicycle travel. 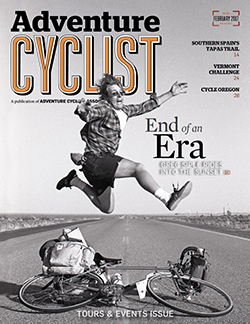 Greg used the power of art and design to inspire people to travel by bike through inspirational stories, illustration, and photojournalism. For almost 40 years, Greg has designed and contributed to Adventure Cyclist, the only North American magazine dedicated solely to bicycle travel and adventure around the world. He recently co-authored the book America’s Bicycle Route: The Story of the Transamerica Bicycle Trail published in 2016 and currently in its second printing. Since 1982, Greg has photographed and interviewed more than 5,000 traveling cyclists over a span of 35 years. Many of these portraits are chronicled in the traveling exhibition Bicycle Eclectic: Adventure Cycling Association’s National Bicycle Touring Portrait Collection, and “The Open Road Gallery,” featured in every Adventure Cyclist issue.

“As the person who has worked most closely with Greg over the past 22 years, I’m having a hard time imagining life at Adventure Cycling’s headquarters without his daily presence. His dedication to bicycle travel and cycling in general will be sorely missed, as will his good cheer and sense of humor,” said Mike Deme, Adventure Cycling’s Design & Media Director.

Siple plans on continuing his touring ways and will be doing so with his wife June on a pair of Brompton folding bikes. “A folding bike offers the flexibility to hop and off buses, trains and planes,” said Siple. “There’s no need for cumbersome boxes and breakdown procedures. June and I have had Brompton’s in mind for some time and are thrilled they will be a big part of our bike-travel future.”

The association will host a special open house on February 3 from 5:00 to 8:00 p.m. at Adventure Cycling’s headquarters (150 E. Pine St. in downtown Missoula, MT) to celebrate Siple’s extraordinary career, as well as completion of the newly remodeled east wing of the organization’s building. Read more about Greg's incredible journey here.

A pioneer of the American cycling movement retires after five decades of service https://goo.gl/Ux32oX

A pioneer of the American cycling movement retires after five decades of service https://goo.gl/Ux32oX