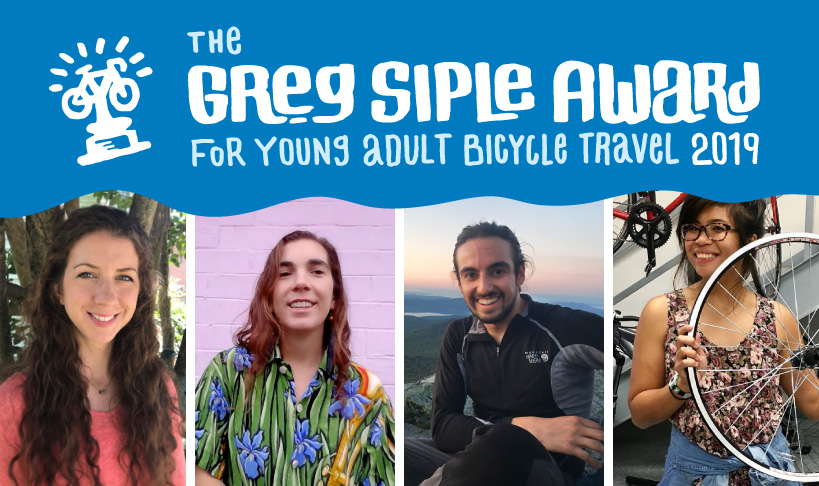 The Greg Siple Award covers the cost of attending an Adventure Cycling education course and provides the winners with bike touring gear. In return, each recipient will perform an outreach project in their community to promote bicycle touring. Applicants proposed their projects in written applications, and 10 finalists in each award category were asked to make short videos about their projects (watch the winning videos below).

Now in its sixth year, the Greg Siple Award was developed to introduce more young people to bicycle travel. The award is named in honor of Adventure Cycling’s cofounder and longtime art director Greg Siple, who discovered bike touring as a young adult and inspired generations of people to travel by bike.

Cohen and Kushwaha were chosen from 60 applicants for the Intro to Bike Travel award. They will learn more about the logistics of bike travel by taking one of Adventure Cycling’s Intro to Road Touring courses. Cohen and Kushwaha will be outfitted with new REI touring bicycles, and other gear courtesy of Big Agnes, Arkel, and Bedrock Sandals. Their new bikes will be shipped to and from the educational course courtesy of BikeFlights.com.

After taking an Intro to Road Touring course, Cohen and Kushwaha will each lead a bike tour. Cohen will lead an overnight bike trip for visually impaired students at the Texas School for the Blind. “Cycling is a sweet way to live a joyful and healthy life, embrace the outdoors, build community, and become self-reliant,” Cohen wrote in her application.

Kushwaha will lead a five-day bike tour for youth at Mount Mansfield Union High School in Jericho, Vermont, where he went to high school. “I strongly believe in the power of adventure to change lives for the better,” Kushwaha wrote.

Fajardo and McGowan were chosen among 47 applicants for the Outdoor Leadership Award, intended for young adults who want to get more involved in outdoor leadership. Both women will complete an Adventure Cycling Leadership Training Course, with bike shipments covered by BikeFlights.com. They will then put their new skills to the test when they go on an Adventure Cycling self-contained tour. They will receive Bedrock Sandals and a $100 gift certificate to Adventure Cycling’s Cyclosource store to update their gear.

Fajardo’s outreach project includes organizing a bike travel seminar, a bike travel storytelling event, a Bike Your Park Day ride with the bike collective the Freewheel Project, where she works, and a bike camping trip for women, trans, femme, and nonbinary cyclists. “I want my future role in outdoor leadership to involve reaching out to people who otherwise wouldn’t have heard of bike travel or wouldn’t be able to afford to do something like that,” she wrote. “It would be my dream to educate underrepresented populations in cycling about outdoor skills, take them out on rides, and help them access the gear they would need to see the bicycle’s full potential.”

McGowan will lead training workshops, weekly rides, and monthly mentoring meetings for 40 disadvantaged youth, culminating in a bike tour with help from Momentum Bike Clubs. The youth will be required to share their experience with local nonprofits and community members. “I want to help educate and inspire the next generation of bike travel in a way that is more inclusive than what we typically see in the bike industry today,” McGowan said.

Donations to the Greg Siple Award for Young Adult Bicycle Travel can be made on Adventure Cycling’s website. Special thanks to the following sponsors who are generously outfitting the 2019 award winners: REI, Arkel, Big Agnes, BikeFlights.com, and Bedrock Sandals.