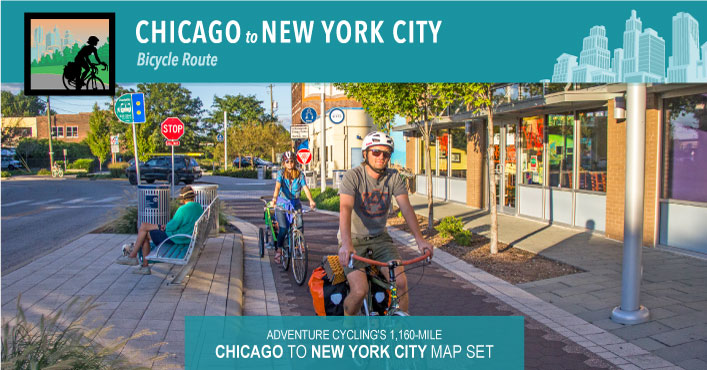 MISSOULA, MONTANA, June 27, 2017 — Maps are now available for Adventure Cycling Association’s Chicago to New York City Bicycle Route (CNYC). The 1,160-mile route from the Windy City to the Big Apple is covered in a four-map set, plus two for the Philadelphia Alternate, allowing cyclists to tour the whole thing or ride a few preferred sections. 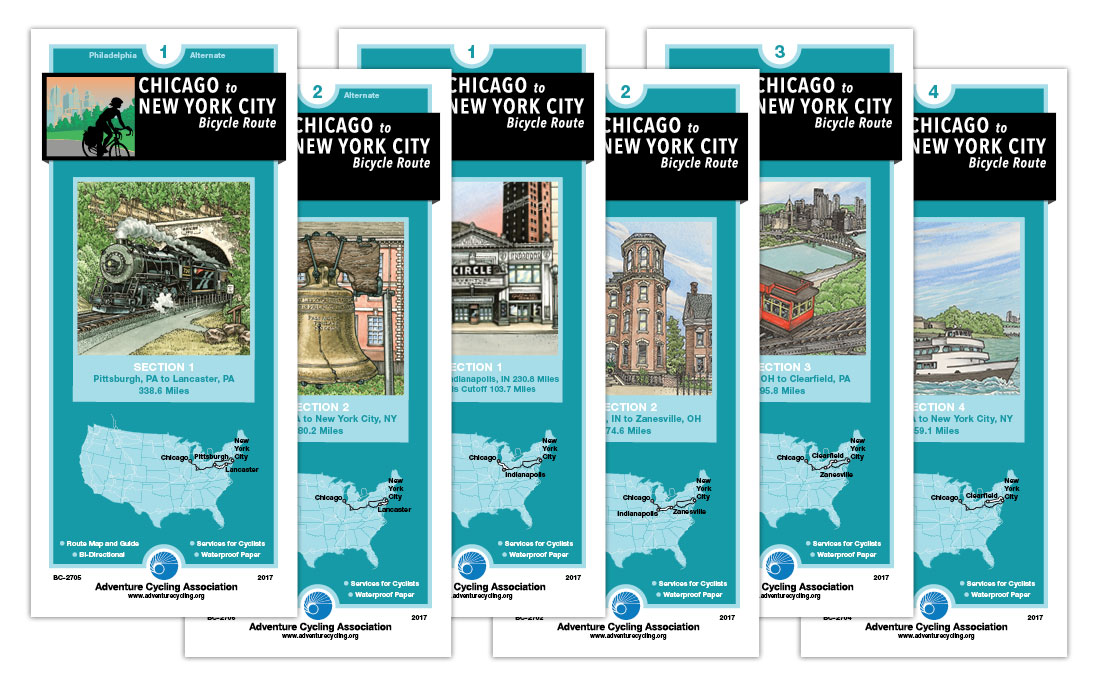 The maps feature turn-by-turn directions, detailed navigational instructions, elevation profiles, and services cyclists will need along the route. Combined with Bicycle Route 66, the Chicago to New York City Bicycle Route gives cyclists a fourth option to cross the United States, this time from New York City’s Battery Park all the way to Santa Monica, taking in the three largest cities in the nation along its length. “This new route, similar to Bicycle Route 66, is a departure from our traditional philosophy of mapping rural routes and avoiding large cities,” said Carla Majernik, Adventure Cycling’s Routes & Mapping Director. “It links several major metropolitan areas of the Midwest and the Eastern Seaboard and uses many more miles of separate paths and rail trails than ever before on our routes. You’ll still traverse rural America; the bonus is enjoying the attractions only big cities have to offer.”

From Chicago to New York City, the new route passes through Indianapolis, Indiana, Columbus, Ohio, and Pittsburgh, Pennsylvania. If you take advantage of the Philadelphia Alternate, you’ll add only 13 miles overall and enjoy peaceful riding on the Great Allegheny Passage and the C&O Canal.

The Chicago to New York City Bicycle Route map app is also available as a great accompaniment to the paper maps. Similar to the CNYC paper maps, this app has the information you need on the road. Some features of the app include: show or hide bicycling services (e.g., campgrounds, bike shops, lodging, and towns), embedded Google search for even more services, contact services with handy click-to-call buttons, the ability to calculate the distance between two points on the route and see the elevation profile, the ability to switch between Google Maps and OpenCycleMap for more detail, and an offline capability when there is no available cell service.

Out-of-state cyclists can access the CNYC at any of the major cities along the route where they can find an international airport, and the route closely parallels Amtrak lines in several states. The Capitol Limited, Piedmont, and Vermonter routes all offer carry-on bike service.

When planning their tour, cyclists should time their itinerary between early April and late August. The route hovers due north of the Mason-Dixon Line and the 45th parallel, so November through March would likely be cold and snowy in parts. Autumn can be another good time for a trip, with its cooler nighttime air temperatures and lower humidity. For an autumn excursion, cyclists should shoot for early September to mid-October.

Download web-ready photos (ZIP/48.9MB). For high-res images, or to arrange an interview with the route’s cartographers, please contact Lisa McKinney.

Tweet: Want to go bicycle tripping from the Windy City to the Big Apple? #CHI2NYC https://goo.gl/a8MrbG

Facebook/Newsletter: Adventure Cycling has unveiled its latest bicycle route tracing from the Windy City to the Big Apple. Check it out here: http://www.adventurecycling.org/CHI2NYC to purchase maps and learn more.