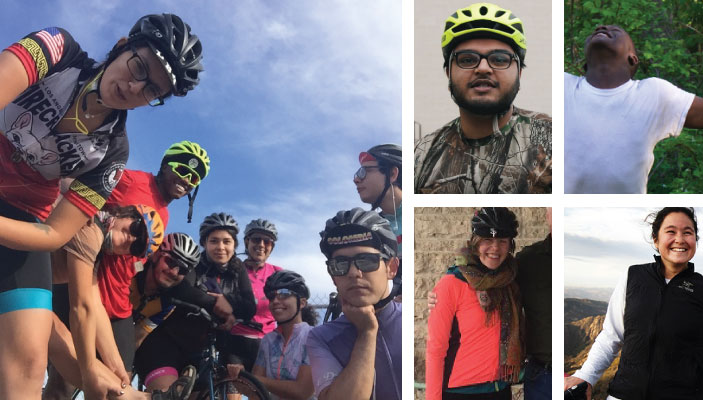 In its fifth year, The Greg Siple Award was developed based on feedback by Adventure Cycling members to introduce more young people to bicycle travel. The award is named in honor of Adventure Cycling’s cofounder and longtime art director, Greg Siple, who discovered bike touring as a young adult and inspired generations of people to travel by bike.

The Greg Siple Award is designed to support young adults of varying experience by covering the cost of attending one of Adventure Cycling’s education courses and provide them with bike touring gear. In return, the recipients perform an outreach project in their community to promote bicycle touring. Applicants proposed their project in a written application and nine finalists in each award category were asked to make a short video about their project.

Kumar and Ukach were chosen from 58 applicants for the Intro to Bike Travel award. This award is aimed at young people who dream of going on a self-supported bicycle tour but want to learn more about the logistics of bike travel before hitting the road. Kumar and Mohamed will be outfitted with new REI touring bicycles and other gear, courtesy of Big Agnes, Arkel, ABUS, Planet Bike, and bike shipments from BikeFlights.com.

After taking an Intro to Road Touring course offered by Adventure Cycling, Kumar and Ukach will both take people in their community on a bike tour. Kumar will start a bike touring program at West Virginia University, where he is a student, and take peers on a four-night trip on the C&O Canal. Kumar included a succession plan in his application. “My eventual goal with this would be to find two to three younger students to take over the reins when I graduate in May of 2018 and continue hosting these rides monthly,” he wrote.

Ukach will take youth and adults on a bike overnight with support from Community Bike Project Omaha, where he volunteers. “This trip will also serve as a primer for teaching city youth who have never experienced spending a night outdoors how liberating and exciting that can be,” Ukach wrote in his application.

Garrett and Horn were chosen from 38 applicants for the Outdoor Leadership award for those who have bike travel experience and want to get more involved in outdoor leadership. Both women will complete an Adventure Cycling Leadership Training Course this fall and learn about the philosophy of leadership and how it applies to self-contained and supported bicycle tours. They will put their new skills to the test when they go on an Adventure Cycling self-contained tour later this year or in 2019. Garrett and Horn will also receive a $100 gift certificate to Adventure Cycling’s Cyclosource store to update their gear, an ABUS lock, and bike shipments from BikeFlights.com.

Garrett, who works for the National Park Service, will be based in arctic Kotzebue, Alaska, this summer to work with local youth, who make up nearly 40 percent of the population. She will teach youth bike safety, instruction, and maintenance and take them on community rides that incorporate science and history curriculum. “Getting people on bikes and strengthening the rapport between gateway communities and public land is something that I am passionate about,” Garrett wrote. “This kind of community outreach project has the potential to be scaled up or down and be replicated in other towns adjacent to public lands.”

Special thanks to the following sponsors who are generously outfitting the 2018 award winners: REI, Arkel, Big Agnes, BikeFlights.com, Planet Bike, and ABUS.