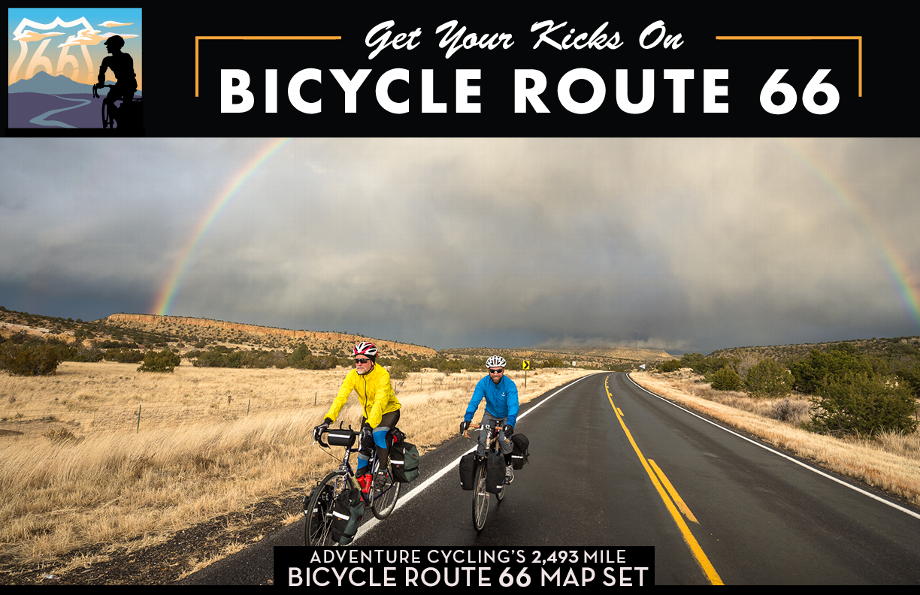 MISSOULA, MONTANA, March 2, 2015 — Adventure Cycling Association today announced the release of Bicycle Route 66, the latest route from America’s bicycle travel experts. Embracing the spirit of “The Mother Road,” the new route follows the famous corridor from Chicago to Los Angeles on roads appropriate for cyclists, including sections of the historic highway. The route is covered in a specially designed six-map set, allowing cyclists to tour the whole thing or ride a few preferred sections to maximize their Americana intake.

“The vision for Bicycle Route 66 is the same as the original vision for Route 66, which was to connect the main streets of rural and urban communities,” said Ginny Sullivan, Adventure Cycling’s director of travel initiatives. “Bicycle Route 66 will be a perfect choice for traveling cyclists looking to explore the American heartland's natural beauty, history, and funky out-of-the-way places.”

The new Bicycle Route 66 maps span eight states (IL, MO, KS, OK, TX, NM, AZ, and CA) and cover 2,493 miles. “Fueled by nostalgia and fired by preservation-minded folks, Route 66 is a magical cross section of the nation; from the massive skyscrapers of Chicago, over the green hills of the Ozarks, the grassy plains, the awesome deserts and mountains, then down into the fascinating mosaic of the Los Angeles basin,” wrote Jerry McClanahan, author of EZ 66 Guide for Travelers. “There’s something for everyone here—the embodiment of freedom, the legendary emblem of 20th century roadside America.”

The maps feature turn-by-turn directions, detailed navigational instructions, elevation profiles, and services cyclists will need along the route. Now cyclists can explore at their own pace the surviving pieces of architecture, abandoned bridges, landmarks, businesses, and historically important communities from the golden era of U.S. Route 66. “This route can be done as a camping tour in roadside campgrounds, however there are many unique motels along the route which make this a good credit-card touring route. Eating in the old cafes and diners is part of the charm,” said Lon Haldeman, an experienced Route 66 bicycle-tour leader.

Cyclists will encounter along Bicycle Route 66 numerous natural and man-made wonders, including: Gemini Giant in Wilmington, Il, Gateway Arch in St. Louis, MO, Historic Brandbury Bishop Deli in Webb City, MO, Cadillac Ranch in Amarillo, TX, Route 66 Museum in Clinton, OK, Catoosa Whale in Catoosa, OK, Petrified Forest in Arizona, and the Ozarks in Missouri. “People come from all over the U.S and around the world to travel Route 66,” said Bill Kelly, Executive Director of the Illinois Route 66 Scenic Byway. “Bicycle Route 66 will enhance the non-motorized experience for cyclists touring the route.”

Adventure Cycling announced the route at the end of 2010 and spent the next four years researching and laying out the route. “Route 66 was the overwhelming favorite among our members for a new long-distance route,” said Carla Majernik, Adventure Cycling's routes and mapping director. “It's a legendary corridor, and for our route network, a critical link through states where there were no established Adventure Cycling routes, such as Oklahoma.” The addition of Bicycle Route 66 brings the total Adventure Cycling Route Network to 44,673 miles. The network passes through 47 states and parts of Canada and is the largest mapped national cycling network in the world.

The design of Bicycle Route 66 involved collaboration between Adventure Cycling, cycling organizations, government agencies, and tourism bureaus already working to bring cycling to Route 66. These partnerships helped ensure the route incorporates the right mix of historic elements and cycling-friendly roads and trails. Ed Barsotti, executive director of the League of Illinois Bicyclists, commented: “Illinois has an early lead in bicycling Route 66, with a user’s guide of an interim route available. Adventure Cycling’s work will leverage Illinois’ momentum into a national vision.” The National Park Service also played an integral role in the development of Bicycle Route 66, providing valuable leadership through the national Route 66 Corridor Preservation Program and technical assistance through the Rivers, Trails and Conservation Assistance Program.

Similar to the flow of motor vehicle travelers along the original “Main Street of America,” the influx of cyclists will provide an economic boost to small communities along the route. There is growing evidence that touring cyclists spend more money and time than the average tourist. For example, a recent survey done in Montana by the Institute for Tourism and Recreation Research found that multi-day cyclists spend $75-103 per day and stay an average of eight or more nights while traveling through the state. Conversely, motorized travelers only spend between $54-68 per day and spend an average of three days in the state. Oregon found that the state benefits by $400 million annually from bicycle tourism alone and Washington State just released a study on outdoor recreation, which recognizes that bicycling contributes $3.1 billion to the state's economy annually.

The most famous road in America has been called many things from the grand — the “Mother Road” and the “Main Street of America” — to the simple — U.S. 66. It now has one more moniker to add to its storied history: Bicycle Route 66.

For more information about Bicycle Route 66 and to purchase maps, visit http://www.adventurecycling.org/bicycleroute66.

Download web-ready photos (ZIP/8.5MB) with captions. Download a web-ready overview map (JPG/81KB) of the route. For high-res images, or to arrange an interview with the route’s cartographers, please contact Lisa McKinney.

Tweet: A New Trip Down an Old Road – Get Your Kicks On Bicycle Route 66! #acaBR66 http://www.adventurecycling.org/bicycleroute66.

30 Off-bike Things to Do along Bicycle Route 66