MISSOULA, MONTANA, May 1, 2015 — For the sixth year in a row, Adventure Cycling is kicking off National Bike Month by launching its month-long U.S. Bicycle Route System (USBRS) campaign to raise awareness and support of a seamless national bicycle network.

The Build It. Bike It. Be a Part of It campaign has raised more than $432,000 over the last five years toward building the USBRS, and has helped create and designate over 8,000 miles of U.S. Bicycle Routes (USBR), with thousands more to come. 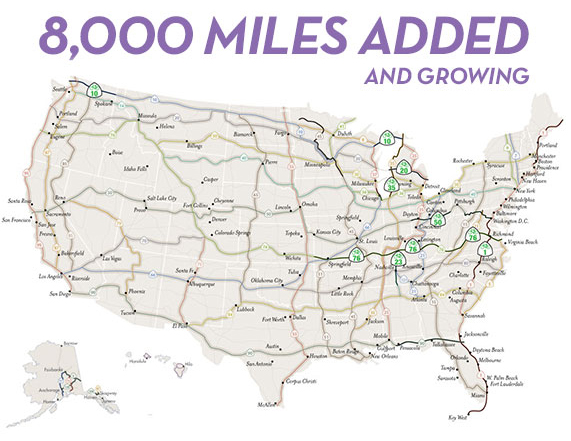 Roads connect us. They are a lifeline to our neighbors next door, our friends across town, and people across the country. The U.S. Bicycle Route System will connect people, places, and all the things we love by providing an official nationwide network of signed bicycle routes across the U.S. using roads and trails.

This year, Adventure Cycling plans to raise $150,000 by May 31. “This fall we hit a major threshold for the network, reaching over 8,000 miles of designated routes in sixteen states plus the District of Columbia,” said Adventure Cycling’s Executive Director, Jim Sayer. “With more states planning routes in 2015, we are about to reach another major milestone – the 10,000-mile mark. That’s one-fifth of the way towards completing a 50,000-mile network, covering the entire country.”

Adventure Cycling provides staff-support for development of the U.S. Bicycle Route System, which is a project of the American Association of State Highway and Transportation Officials (AASHTO), a nonprofit, nonpartisan association representing highway and transportation departments in all 50 states, the District of Columbia, and Puerto Rico. “This marks the eleventh consecutive year that AASHTO and Adventure Cycling Association have teamed up to advance and promote the U.S. Bicycle Route System,” said Bud Wright AASHTO executive director.  “Employees at state departments of transportation across the country not only help to grow the system every year, they bike it too.”

In the fall, even more routes were designated, including:

“States and their partners have come to know Adventure Cycling as the resource center for the U.S. Bicycle Route System. We’ve developed the tools, expertise and relationships with volunteers and state agencies. Because of that, we’re seeing significant progress on completing and signing routes across multiple states,” commented Ginny Sullivan, director of travel initiatives and coordinator of the project since 2005.

During National Bike Month, the U.S. Bicycle Route System is a reminder of how a national bike network is inspiring people from all over the world to ride. "Cycling is becoming more mainstream. This means that there is a clear way across the country that cyclists can use for their trip,” said Jim Giddens.

A key element of this year’s USBRS campaign is a matching pledge from a donor to encourage first-time and past donors to support work on the U.S. Bicycle Route System. Any donations to the campaign will be doubled by this pledge, up to $25,000. In addition, Adventure Cycling will be doing daily, weekly and month-long drawings to win terrific raffle prizes for anyone who donates to the campaign.

Download web-ready photos (ZIP/3.4MB) and a web-ready overview map (JPG/87KB) of the USBRS. For high-res images, or to arrange an interview with Ginny Sullivan, please contact Lisa McKinney.

Want to learn more about the USBRS? Watch this video.

Tweet: Annual fundraiser kicks off to support creation of the largest official cycling network in the world: http://bit.ly/2015BeApartOfIt @USBicycleRoutes #USBRS

Facebook/Newsletter: Annual fundraiser kicks off to support creation of the largest official cycling network in the world. http://bit.ly/2015BeApartOfIt #USBRS