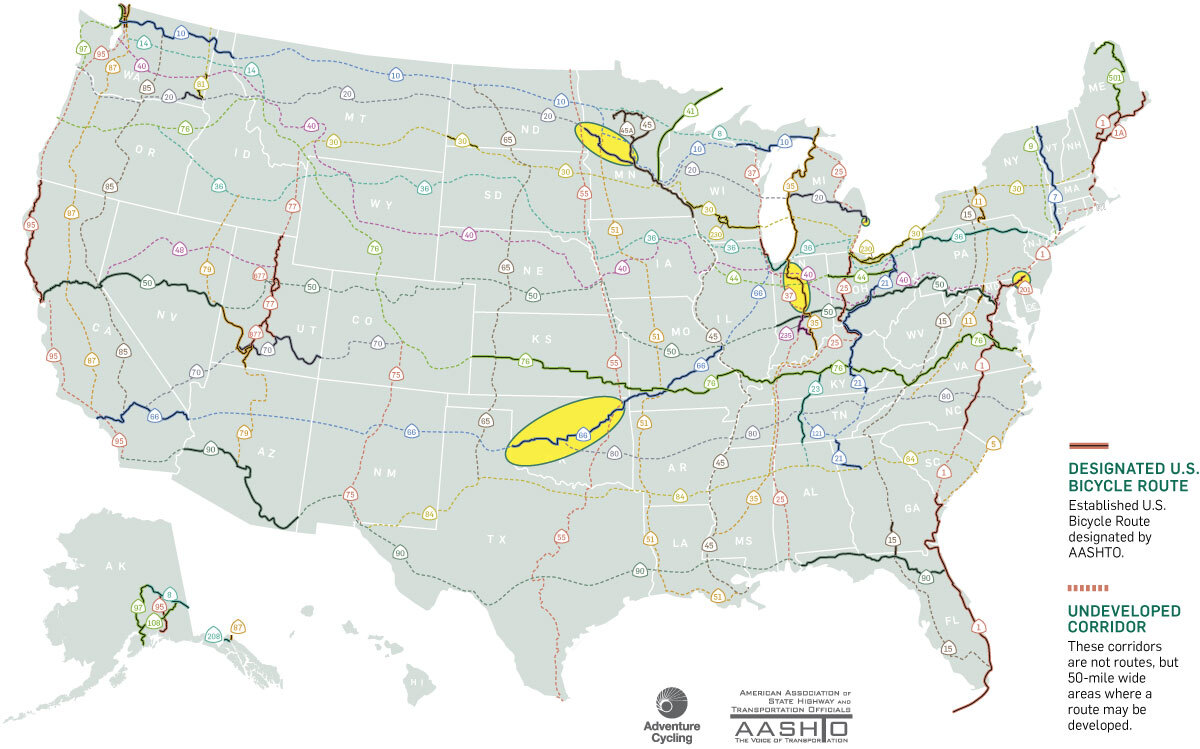 MISSOULA, Mont. (June 28, 2022) – Adventure Cycling Association is proud to announce the designation of three new U.S. Bicycle Routes in Oklahoma, Minnesota, and Delaware, and the realignment and extension of additional routes through Indiana and Michigan, adding more than 650 miles to the U.S. Bicycle Route System and improving connectivity and the cycling experience.

The new routes in Oklahoma and Delaware are the first U.S. Bicycle Routes in those states, while the new route in Minnesota is its fourth. USBR 66 in Oklahoma boasts the most rideable miles of Historic Route 66, the “Mother Road,” USBR 20 in Minnesota offers miles of off-road riding and several of the state’s 10,000 lakes, and USBR 201 through Delaware takes in historic sites and Delaware River views.

The realignment and extension of routes through Michigan and Indiana were made based on feedback from cyclists and local communities, as well as the completion of infrastructure improvements and other projects.

“It’s been 96 years since the iconic Route 66 opened to motor vehicle traffic in the U.S.,” said Jim Tymon, Executive Director of the American Association of State Highway and Transportation Officials. “Now, cyclists can follow the historic route for more than 400 miles through Oklahoma using the newly designated USBR 66. This latest round of U.S. Bicycle Route System designations exemplifies AASHTO’s steadfast commitment to creating active transportation facilities in rural and urban America.”

The U.S. Bicycle Route System is a developing national network of officially designated, numbered, and signed routes that use existing roads, trails, and other facilities appropriate for bike travel. It will eventually encompass 50,000 miles of routes and open new opportunities for cross-country travel, regional touring, and commuting by bike. It also benefits communities by providing new bicycle routes, enhancing safety, and increasing tourism and economic activity.

Digital maps for all designated U.S. Bicycle Routes are available to the public for free on the Adventure Cycling Association website.

“We’re excited to coordinate this project to build a better future for bicycle travel across the United States,” said Jennifer O’Dell, Executive Director of Adventure Cycling. “The latest designations are powerful momentum in this long-term effort.”

Highlights of the newly designated and realigned U.S. Bicycle Routes include:

USBR 66 (429 miles): USBR 66 crosses the state from the Kansas border near Miami in its northeast corner to the Texas Panhandle near Elk City on the west. Following Historic Route 66, it travels through Tulsa and Oklahoma City, and passes landmarks like the world’s largest concrete totem pole near Chelsea, the Round Barn in Arcadia, the historic Bridgeport Bridge from “The Grapes of Wrath,” and Lucille’s Service Station in Weatherford along the way. USBR 66 map.

USBR 20 (188 miles): From the west bank of the Mississippi River in St. Cloud, USBR 20 travels northwest, joining the Lake Wobegon Regional Trail to Osakis, then the Central Lakes State Trail to Fergus Falls, passing numerous towns and several of the state’s 10,000 lakes along the way. The route leaves Fergus Falls on a section of the North Country Trail and continues to Maplewood State Park before merging with the Heart of the Lakes Trail (to be completed this summer). After Pelican Rapids, it reaches Moorhead, the Red River and the North Dakota border on roads and trails. USBR 20 map.

USBR 201 (37  miles): The new USBR 201 begins at the Pennsylvania border and parallels the Delaware River to the southwest, joining the Northern Delaware Greenway and linking Bellevue State Park to Brandywine Park as it enters Wilmington. After crossing the center of the city, it follows the Jack A. Markell Trail to historic New Castle and, again, the Delaware River, where there are views of waterfowl, ships, and the Delaware Memorial Bridge. Turning west, the route continues through Newark neighborhoods and past the University of Delaware campus to its end at the Maryland border. USBR 201 map.

USBR 20: On its east end, USBR 20 has been extended about seven miles on local roads, the Bridge to Bay Trail and state highway to the city of Algonac. The route now crosses Michigan from Algonac to Bay City and Ludington. USBR 20 map.

USBR 35: Sections of USBR 35 have been realigned to move them from roads to extensions of the Erie Trail in Starke County and the Pennsy Trail in Marion County. The route crosses the state from the Michigan border to Louisville, Kentucky, passing through Indianapolis. USBR 35 map.